The PEN Ten with Etgar Keret 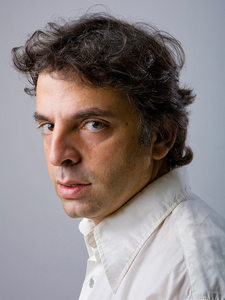 The PEN Ten is PEN America’s weekly interview series. This week, we talk with Etgar Keret, a recipient of the French Chevalier de l’Ordre des Arts et des Lettres, a lecturer at Ben-Gurion University of the Negev, and the author, most recently, of the story collection Suddenly, a Knock on the Door and the forthcoming memoir The Seven Good Years. His work has appeared in The New Yorker, The Wall Street Journal, The Paris Review, The New York Times, and on “This American Life,” where he is a regular contributor. He was born in Ramat Gan and lives in Tel Aviv.

I never saw myself as a writer, and I still don’t. But I’ve always needed and liked to tell myself stories. I remember when I was in second grade, on my way back from school, I saw a beautiful young woman in an Israel Defense Forces uniform and a slightly older bearded guy talking to each other. They were very close to each other when they talked and seemed very intimate and at ease when suddenly, out of nowhere, the girl soldier punched the guy really hard in his face and ran away crying. I still had about half a mile to walk home and by the time I got there, I had already made up a story.

In the story they were brother and sister. The brother would steal from their parents and would use his sister as a cover, and when she found out she punched him and said that she would never speak to him again. It was a bad story but it had at least given that arbitrary act of violence some meaning and context. I remember how all the things that had seemed strange before making up that story became sensible and moving; how the entire process had relaxed me. I guess it still does.

That’s the frustrating thing when you read the work of a great writer: You can’t really steal it because it is a reflection of another person’s mind.

That is, I think, the true power of art: it is not a show-offy act of saying “I’m amazing,” but rather almost a selfless act of saying there is something amazing which exists in all of us and I can call it by a name which only I could have come up with, and if you try hard enough maybe you could have another name for it, one which only you would be able to find. I think that great stories are inherently much smarter than the people who wrote them, because they are not about inventing something but rather about uniquely exposing something that was already there.

Any place that is quiet and not distracting enough to let me forget I’m in it for the time I write.

I’ve been stopped by the police a few times but never arrested. I have a funny walk and one of the policemen who stopped me told me that it is a junkie’s walk and that no one who is sober could walk like that.

I find it almost impossible to be in the present. I always find myself thinking about what happened just before and what’s about to happen next. When I write I’m relieved of that. The story’s past doesn’t make me feel guilty and the story’s future doesn’t make me feel any anxiety. So I guess the place it is the easiest for me just to be in the moment is in fiction, both as a writer and as a reader.

Words never seem to be daring or dangerous, even if, in retrospect, they did get me into trouble more than once. And whenever that happens, doesn’t matter how many times, I’m always surprised.

I don’t feel any responsibility when I write fiction; what I’m doing is just making up things that aren’t real. What could be more harmless than that? It is the rest of the time that I feel responsible: not to offend, not to forget, not to break anything that later I won’t be able to fix.

Writing, for me, is the gift of being able to put down that burden of responsibility, and when I finish a story, I take a deep breath, bend down, and lift that weight back up again.

Each writer picks his own purpose. Mine is to always try and find humanity even in my most grim and sad stories. To try to say “we may fuck up constantly but underneath all this there is something sensitive and hurting.” To remind us that we could all be better, do better, even if in the end we don’t and we’re not.

None. I don’t think a book can change someone who doesn’t want to be changed. A book is like a whisper: you have to try and listen really hard to be able to be affected by it, and people who are afraid of writers and books simply aren’t willing to try.

The action is basically the same. The difference is in the intention behind it. If observation is mostly motivated by curiosity, then surveillance is almost exclusively motivated by fear.