The PEN Ten with Brandon Caro 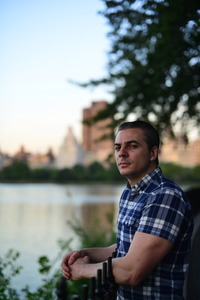 The PEN Ten is PEN America’s weekly interview series. This week, we speak to Brandon Caro, author of the debut novel Old Silk Road (Post Hill Press, 2015). He was a Navy corpsman (combat medic) and advisor to the Afghan National Army in Afghanistan from 2006-2007. His writing about the war in Afghanistan and on veteran suicide and addiction has been featured in The New York Times, The Daily Beast, and elsewhere. He holds a B.A. in Liberal Arts from Texas State University, and is currently pursuing an MFA from The New School. He lives in Austin, Texas.

When did being a writer begin to inform your sense of identity?
When I got out of the Navy after returning home from Afghanistan and began studying creative writing at Texas State University. I knew I had at least one book in me. That book turned out to be Old Silk Road.

Whose work would you like to steal without attribution or consequences?
I wouldn’t want to steal anyone’s work, but I’m a huge admirer of Tim O’Brien. I first read The Things They Carried in eighth grade. The literary aspects of war really intrigued me, even from a young age. Especially from a young age.

When, if ever, is censorship acceptable?
The great irony with respect to the contemporary conversation about censorship is that during the obscenity trials of the ’50s and ’60s when Howl and Tropic of Cancer were finally made legal in the U.S., it was the liberals defending free speech, the Christian conservatives condemning the works as obscene. Today, it’s the liberals who are stifling academic freedom through their “trigger warnings” and such.

Have you ever been arrested? Care to discuss?
I was arrested for drunken shenanigans two weeks before my 22nd birthday. I spent the night in jail and told the judge the next morning I had enlisted in the Navy, so they dropped the charges.

Obsessions are influences—what are yours?
I pay close attention to news and politics. I’m amazed at how many times some of our leaders are caught on record lying but still maintain legions of devoted followers.

What’s the most daring thing you’ve ever put into words?
In my novel, Old Silk Road, I imply the U.S. military is involved in the Afghan heroin trade.

While the notion of the public intellectual has fallen out of fashion, do you believe writers have a collective purpose?
Writers are not a monolith. Different writers have different purposes but most crave fame and adulation.

What book would you send to the leader of a government that imprisons writers?
Sending a book to a leader who imprisons writers is a useless endeavor. I would send millions of copies of 1984 to the people instead.

New Yorkers from all walks of life joined @PENamerica and beloved authors on the steps of the NY Public Library today in solidarity with Salmon Rushdie and in defense of free expression, free speech and the freedom to write. #StandWithSalman