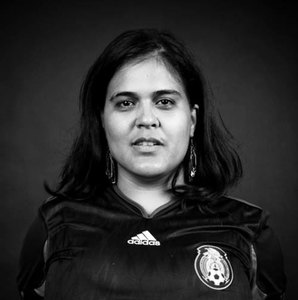 The PEN Ten is PEN America’s weekly interview series. This week, we talk to Adriana E. Ramírez, winner of the inaugural PEN/Fusion Emerging Writers Prize for her manuscript “Dead Boys,” which takes an unflinching look at the bodies of those who have died too young: nine people hanged by a drug cartel on the U.S.-Mexico border, the washed-up casualties of Colombian strife, a young boy unable to outrun a loan shark, and a tragic death in the author’s own family.

Ramírez is a nonfiction writer and performance poet based in Pittsburgh. She teaches at Pitt, co-runs the Steel City Poetry Slam, and co-founded Aster(ix) Journal. A VONA/Voices alum, her work has appeared in Los Angeles Review of Books, Convolution, HEArt, Apogee, and on Nerve.com, as well as on hundreds of stages across the country.

Look out for an excerpt of Ramírez’s award-winning manuscript in the Guernica/PEN Flash Series.

When did being a writer begin to inform your sense of identity?
I probably started calling myself a writer in school, in the most clichéd and pretentious way possible. I had a hard time making friends—my journals kept me better company than most people. But I thought of myself as a proper writer, as in “I am a writer,” in a series of moments: when I first saw my name in print, when I got my first press badge, when I first received payment for my words. I know that external validation may not feel as pure as other identity-forming events, but I think identity partially works this way—when we see ourselves reflected in the eyes of others, we better understand ourselves. As soon as enough people referred to me as a writer, well, what else could I be?

What’s the most daring thing you’ve ever put into words?
The death of my brother, hands down. It opens the piece that just won the PEN/Fusion Emerging Writers Prize. It’s dangerous to write about how people grieve—for grief is so personal, how do I dare? But I find that the stuff worth writing about is always risky, always dangerous.

What is the responsibility of the writer?
A writer’s responsibility is to tell the truth—the lowercase t truth in some cases, and the capital T Truth in others. Writers document these truths, as best they can, and allow us transformative insight: adding to the larger body of human stories, offering a myriad of interpretive possibilities, showing the follies of histories and paths we’ve avoided. This is why it’s important to offer a diversity of voices. Because by reading different insights, we can arrive at better versions of ourselves.

While the notion of the public intellectual has fallen out of fashion, do you believe writers have a collective purpose?
Absolutely. I told a friend at VONA (an awesome organization that serves writers of color) that we’re starting a movement. Writers don’t just write, we also talk, sometimes to each other. And we have feelings about justice, oppression, world politics. Sometimes those feelings inform our conversations and allow us to manifest them through different means. My writing about the Drug War from the view point of the dead aims to be in conversation with other thinkers, other do-ers. The public intellectual may have fallen out of fashion, but the public activist has not. My favorite writers are merely using their skill as a form of activism.

Whose work would you like to steal without attribution or consequences?
Milan Kundera, Virginia Woolf, Fernando Vallejo. If I’m going to steal, I may as well do so from the best. I want to steal their sentences, their structures, their voices. But I have to settle for capturing my own.

Obsessions are influences—what are yours?
I’m obsessed with violence. Violence in film, violence in video games, literature, professional wrestling, historical accounts of battles, fictional accounts of dancing dragons, people fighting on the streets…I pull up a seat and start screaming “fight! fight!” It’s a horrible thing to admit. But violence certainly drives my work as a writer. Perhaps because I still cannot fathom that such a thing exists. What is it that has to snap inside a person for a deliberate act of violence to occur? Does anything have to snap at all? Isn’t it there already? Innate. Like a little kid punching another over a toy. Consider my joy at executing a fatality against my husband in the video game Mortal Kombat X—I actually start screaming profanities with glee. It’s not a good look. But at the same time, I’m not one to be violent outside my fascination. My daily interactions are free from violence of thought, action, or intent—perhaps because I work it all out in my consumption of culture. The uppercut on the screen acts as a release from whatever drives the ones that connect with real faces. So yes, I’m into fighting these days. And war. And genocide. Because I think there’s value in staring at the ugly part of humanity. An obsession with violence just doesn’t make for the best dinner conversation.

Have you ever been arrested? Care to discuss?
Yes. I’ll be coy and say that being arrested at 19 has certainly cost me opportunities—in employment, housing, and volunteering. So I certainly regret the matter. Although I do not regret my very intimate knowledge of how our justice system works for my type of crimes.

When, if ever, is censorship acceptable?
I believe that self-censorship is important. If you don’t like my mother’s cooking (How dare you! Everything she makes is delicious!), you could say something about it—but censoring yourself will spare her some hurt, and you some anguish. On a more serious level, consider hate speech. I wish I could censor folks from saying hateful things, but I also understand that freedom of speech is crucial to dismantling oppression; so what is a politically correct person to do? Ask folks to censor themselves, use good judgement, and try not to hurt other people (especially my mother). On a macro level, I do not think governmental censorship is acceptable, at all. Well, I say “at all,” but then I appreciate not hearing foul language on network television at 11 AM. That’s a form of censorship too. So how about this: I believe in free speech, I believe that everyone should have access to information, and I believe that freedom of expression is a human right—but I also believe that we are all accountable for what we say. These freedoms can lead to some tough discussions, some steep consequences, and some loss of goodwill, as much as they can lead to the celebration, fortune, and fame we expect for speaking out. But these moments of expression should never lead to incarceration, oppression, repression, or anguish. There is risk in expression—responsibility too, on all levels.

What book would you send to the leader of a government that imprisons writers?
Preso sin Nombre, Celda sin Número by Jacobo Timerman or anything by Angela Davis.

Where is the line between observation and surveillance?
What people think of as private should remain private. While politicians may scramble to define the public and private sphere, people have a very innate understanding of what their privacy means. In the last 15 years, governments worldwide have decided that anything done in public is something they have the right to “observe,” and then have expanded the borders of the public to cover most of our lives. Observation crosses into surveillance when it takes away our right to have a private life—to think, plan, and associate, without telling anyone what we’re doing or why we’re doing it.

You can choose, as an individual, to showcase your life on social media, reality television, or in a book of selfies. But that’s a personal choice. Anyone seeking privacy should have a right to it.