The PEN Pod: On Diverse Latinx Voices and Identities with Saraciea J. Fennell 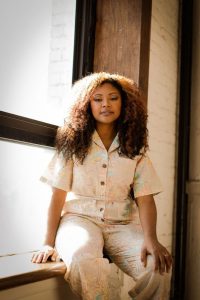 Today on The PEN Pod, we spoke with Saraciea J. Fennell, Black Honduran writer, publicist, and founder of The Bronx is Reading. Saraciea’s new anthology, Wild Tongues Can’t Be Tamed, is out now, and includes 15 original works from Latinx contributors that examine stereotypes and celebrate the experiences of this diverse community. We spoke with Saraciea about the inspiration and development behind Wild Tongues, the multiple identities that many Latinx individuals navigate, and interacting with audiences as a writer and editor (as opposed to as an event producer and publicist). Listen below for our full conversation (our interview with Sarciea is up until the 20:58 mark).

On the Inspiration Behind Wild Tongues

“I was inspired to bring together all of these powerful voices during the 2016 election, when there were several media frenzies and several things in the news about Latinx individuals, and immigrants, and so forth. I thought, ‘Society always gets us wrong,’ and so who better than to sort of subvert some of those myths and stereotypes—and to really write for our community—than to bring together all of these wonderful contributors.

“There are so many writers from Latin American countries that are doing very provocative work, and are fabulous, but I couldn’t include all of them in the anthology. It was actually really important to me to center underrepresented parts of our community, so that’s the queer voices, that’s the Black and Indigenous voices, the Central American voices.

“For me, choosing all of these people was really hard, because like I said, there’s so many amazing writers out there, and I feel like I might have to do a volume two, or even a volume three, just to continue. But I started to really pay attention, like—how many writers am I including, but also where are their roots, where do they have their ancestry from, and what are they connected to?. . . . Having these very varied experiences that were centered across the U.S. was also really important to me, because I didn’t want the collection to sort of be like ‘everyone’s from New York,’ or a certain corner, or a certain country, so I wanted to make sure we had some diversity there.”

On Navigating Multiple Identities within the Latinx Community

“You can imagine how intense it is to navigate the world when you are constantly having to prove your identity, constantly having to reaffirm, ‘This is who I am.’ Society can’t tell me that I can’t be Latinx, you can’t tell me that I’m not Black enough. I can have these multiple identities, I can be multifaceted. It’s very stressful having to constantly explain that to people. . . . I try to explain to people, ‘Don’t think of me as some fancy object that you kind of have to figure out. Get to know me as an individual, and you can just learn I’m a Black Honduran.’

“For me, I try not to use catch-all terms anymore, and this is very recent, it’s a very recent development, and I decided to proactively identify as Honduran because the representation wasn’t there. I was like, ‘You know what, this is a great time for me not to let my publisher say ‘Saraciea is a Black Latinx,’ instead ‘Saraciea is a Black Honduran.’ Just call me out the way I want to be called out and don’t use a catch-all term. So I think we all just struggle with identifiers, especially within the Latin American community, just because we are so multifaceted and it’s hard to just choose one thing, and so we’re always looking for a term that can sort of describe what we are. . . . I feel like the terms are always changing, just like our communities are always changing.”

On Interacting with Audiences as a Writer and Editor

“One thing I will say that I wasn’t really prepared for was just the reception of the anthology, strangely enough. I knew that people would be interested in it, I knew that obviously readers and reviewers were going to get their hands on copies and start talking about it, but I feel like with art you just never know how it’s going to be received. I was kind of nervous, because this is the first YA crossover nonfiction Latinx anthology out there, and a lot of the voices are diverse in many different ways. I just didn’t know what to expect. I was like, ‘Will people enjoy this, will it resonate with them?’, and I’ve been blown away, honestly, by the reception for the book.”

The PEN Pod: On Horror and Humor with Melissa Lozada-Oliva

In a statement co-signed by @pen_int, @atriskartists & @hrw, over 300 artists, including Meryl Streep, @isabelallende, @AlinejadMasih & @shahidul, call on the Cuban government to immediately stop its abuses against Cuban artists. Read the letter here: https://bit.ly/3rMmLw3.