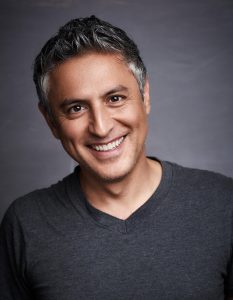 In today’s The PEN Pod episode, we spoke with writer, commentator, and professor Reza Aslan, who in addition to having written four books on religion—including the New York Times-bestselling God: A Human History—is the host and producer of “Rough Draft With Reza Aslan.” Reza talked to us about where he’s looking for truth right now, what free expression threats he’s concerned about, and how writing a book is helping him process the current moment.

You’re a teacher, writer, TV show host, and producer, and now here we are in this moment of national and international crisis. What’s going on with your work right now?
On one level, a writer has to stay home and write. And so in a weird way, knowing that I’m just gonna be locked in my house for the next few months has been kind of a blessing in disguise. I don’t have to do all the other things that I always have to do and deal with all the other aspects of my work. I can just ignore all the noise and sit down and write. I’m trying to take advantage of it, I suppose, but that’s a tough thing to say with people suffering all around the world right now.

There has been so much disinformation around what’s going on right now. Where do you look for truth right now?
Certainly not with our government, that’s for sure. There are a handful of media outlets and journalists that I rely on to get the most unfiltered truth as I possibly can, but we’re still stuck in this weird place, as a country, where we are pretending as though the old norms still apply. I would go so far as to say that those norms haven’t applied for quite some time, but they certainly do not in a time of existential crisis, where we are looking at the possibility of—and this is not an exaggeration—more than a million Americans dying from this preventable place that we’re in right now. At times like that, norms just have to be thrown out, and we have to really start to talk to our politicians, and particularly to the president, in a way that perhaps a lot of these journalists or media personalities are not used to, but which the times are really calling for. We are in a moment right now in which the press is living in a different century. They are treating this president as though he is any other president. They are under the mistaken view that regardless of who is in office, the office itself demands respect. And that is nonsense when the person who is in office is literally putting our lives at risk with his lunacy and his deliberate misinformation. Then the role of the media is not to play some kind of neutral arbiter calling balls and strikes. The role of the media is to be the mouthpiece of truth, and unfortunately, it doesn’t function that way. It’s failing us, I think, pretty dramatically. And so who else can we rely on except artists? That’s the only other source of truth that we can rely on any longer.

“Who else can we rely on except artists? That’s the only other source of truth that we can rely on any longer.”

Are you concerned about the kinds of things that might be done under the banner of the public health emergency that could threaten free speech and the freedom to write?
No question about it. I think that there are forces right now that are looking for ways of taking advantage of this crisis to push through policies that they have been pursuing for a generation, if not more. Sometimes we think that only has to do with certain economic policies, but more importantly, what you are going to see is an attack on certain norms like the freedom of expression, in the name of some measure of national security. Already, you are seeing that happening here and there, on the local level. But when you have an administration as corrupt and morally bankrupt as this one, you just simply cannot put anything past them.

You’re working on a book right now. Do you have tips for writers out there who are really trying now to put pen to paper?
To me, the hardest part of writing is just simply having the time to sit down and write. And so I do think that this is an opportunity for a lot of us writers to take advantage of that. Any excuse that we used to have for not writing—and we writers have lots of excuses for not writing—are no longer there. The other thing is, and I don’t know if other writers have this experience, but I certainly do, especially when I’m working on longform projects like a book that isn’t going to see the light of day for a couple of years: I think that the experience of writing a project like this is a good exercise, because it does force a person to have a broader perspective, to start thinking not in terms of days or months, but years. We are in an unprecedented situation in this country, a situation that is about to get far worse—unimaginably worse than it is now. And in a sense, we can look at this from a very narrow lens and start panicking and thinking that we’re looking at the end of the world, the end of society as we know it. But I think that when you begin to pull back a little bit and have a much broader perspective of history, you recognize that we have been in situations like this before, that we can survive, that society will change, but it will continue. And I think the experience of writing a book is good practice for that. It expands the mind in the proper ways to have a far broader, more historical perspective on what’s going on right this minute.

“I think that there are forces right now that are looking for ways of taking advantage of this crisis to push through policies that they have been pursuing for a generation, if not more.”

What are you reading, watching, or listening to that’s either providing a nice distraction or more context around what’s happening now?
It’s funny because I keep seeing, online, all these people saying, “Oh my goodness, I’m going to just watch so much Netflix and I’m going to absolutely binge all the shows that I wanted to watch.” These are people without children. For those of us with children, just keeping them occupied for 12, 13, 14 hours, is enough. So I haven’t watched a thing. I’ve just been with my kids as much as possible. And of course, as most writers will tell you—particularly those of us who write nonfiction—once you start writing a book, you don’t read anything for enjoyment anymore. All my reading has to do with the early 20th century revolution in Russia right now, which is interesting. Is it entertaining? No, I wouldn’t say that the Russian Revolution of 1905 is all that much entertainment. But I do have a gigantic stack of books that I’m thinking, you know, this thing is going to last certainly through the summer—maybe it’s time to finally get to Ulysses. When else am I going to do it?

Looking forward to speaking about China and Hollywood on tomorrow's panel. Thanks to @usc_uschina and @PENamerica for hosting!

NEW: PEN America joins @pen_belarus, @pen_int, and over 20 other PEN Centers in signing an open letter expressing deep concern over the systematic violations of free expression rights & human rights in the run-up to the Belarus elections. https://bit.ly/2Pm06Cc