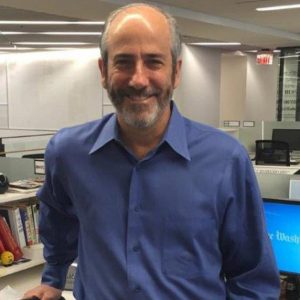 On The PEN Pod today, we spoke with The Washington Post’s media reporter Paul Farhi. Paul has been at The Post since 1988 and has worked as a financial and political reporter for the paper. He’s also the three-time winner of a National Press Club award for media reporting and criticism. We spoke with Paul about what it’s like reporting on the front line as part of an industry that’s taken a major economic hit, the impact of Trump administration’s increasing attacks on reporters and the press, and what he hopes will come out of this crisis. Check out the full episode below (our interview with Paul begins at the 9:45 mark).

How are you able to report now, amid social distancing?
That’s the challenge. We’re all scattered to the winds—we went out in mid-March, and we’ve been at home. Most of us are sitting at home, like I am now, trying to report about things going on in the real world. It’s a real handicap because as a reporter, you want to see the things that you are reporting on. At best, right now, we can only hear the things by talking to people over the phone or maybe on Skype, but they’re not in any position either to show us what’s going on. For example, it’s very hard to get into the hospital to see what’s going on there. And so, there’s enormous challenges in terms of reporting right now.

What role are reporters in the local and national media playing right now, and what kind of stressors are they facing, even beyond these access issues?
I think we are realizing, if we didn’t realize it already, how valuable information is in a crisis. It always is—valuable, accurate, professionally reported, verified information—all of the journalistic values that reporters bring to the job, because misinformation can literally get you killed, and good information can save your life. So now, more than ever, it’s really, really important to go to trusted sources of information. We can certainly talk about what’s trusted and what’s not; there’s always debate about that, but nevertheless, professional reporters doing what journalists have always done is really something that is beyond the usual value during this crisis.

“It always is—valuable, accurate, professionally reported, verified information—all of the journalistic values that reporters bring to the job, because misinformation can literally get you killed, and good information can save your life.”

I want to ask you about some of the reporting you’ve been doing, specifically about the One America News Network (OAN) and its White House correspondent, who was recently barred from the White House Correspondents Association, from the rotation at the White House briefings. How does the association justify locking her out, and how do you think OAN is part of this blurring the line between propaganda and journalism right now?
First of all, they didn’t lock her or OAN out. They put OAN, as well as many other news organizations, in a rotation. The rotation came in as a result of social distancing needs, within the very cramped and very crowded press room. If you’ve ever been there, it’s basically a closet, and you cram—at some times—one hundred people into this closet, to attend these press briefings. So you can’t do that during this time. You’ve got to have some order. You’ve got to have some sequencing of people who come in. There’s a big demand among news organizations. So they started out by reducing the amount of seating, from 49 seats to 25 seats. So OAN was in the rotation and was going to be able to show up once every five days. Then that was inadequate—they reduced it from 25 down to 14. OAN, like other news organizations, had to take its place once every 10 days. Apparently that was unacceptable to OAN and they cut a deal with the press secretary—and frankly, they cut a deal with Trump, who loves OAN. They got special dispensation to show up every single day at the press briefing, unlike most news organizations. So their reporter is now there every single day, with the blessing of the White House and specifically of Trump, who likes OAN, because they report favorably on Trump.

What does that say about what OAN’s role is right now? What does that do for the credibility of their ability to report?
I’ll say this for OAN—much of the time, what they do is headline reporting, and reasonably accurate headline reporting, like you would see on another mainstream news network or TV station. The rest of the time, it delves into a certain kind of paranoid, perhaps conspiratorial— the kinds of things that you would raise an eyebrow, to say the least. There’s some real questions about their “special reports,” whereas their day-in-and-day-out is often without real challenge or contention. The fact that they’ve got this special deal going with Trump tells you that he favors them as reporting about him, that what they do is going to be, essentially, in his interest. And that’s not a real good look when you are trying to be objective and have some arm’s length from the people you cover, especially the president. One of the theories—and this is just a theory, but it makes sense to me—is that Trump likes OAN as a wedge against Fox News, which he has lately been very critical of. So in other words, if he keeps favoring OAN, a more or less conservative network, it keeps Fox News, which more or less is a conservative network, at least in its opinions, in line. And that’s what he’s doing here. He’s using them to lever Fox News to get back to what he thinks is more favorable reporting. If you saw, in his various tweets, he was criticizing Fox News’s daytime programming and Chris Wallace. In other words, he was criticizing legitimate news reporting, as opposed to the opinions he likes to see. So I think that’s the game that’s going on here. It isn’t so much that he loves OAN, but he can use them to work Fox News.

“The advertising base of the mainstream media has come to an almost complete stop, and news organizations were in trouble economically—most of them were before this—now, it’s an absolute existential crisis.”

You probably have a better vantage than most on how reporters are doing covering these briefings, and more broadly, how reporters are doing covering the federal response. What do you think they’re doing well, and where do you think they could be doing better?
I think reporters are producing at tremendous volume, with accurate information. If you go to any local website, you’ll see a lot of useful information about food banks, local hospitals, the local response to the pandemic. Again, now more than ever, we are a very, very valuable source of accurate information, when, again, inaccurate information can be very dangerous. So I think just the fact that reporters are out there in the field or at least remotely reporting about what’s going on has been very useful to people, and readers and viewers have responded. The ratings are way up for news. The traffic for websites and news websites is way up. People want what we do. The problem, and this bears quite a bit of discussion, is that the economic, underpinning foundation of news reporting has absolutely been wiped out. The advertising base of the mainstream media has come to an almost complete stop, and news organizations were in trouble economically—most of them were before this—now, it’s an absolute existential crisis.

Are you reading anything right now, or are you able to focus on any new books, podcasts, or Netflix shows?
You can ask my wife about this, who I’m sheltering in place with—I am reading my phone. It seems like 24/7, but I probably sleep at some point. The flood of information is enormous, and I want to know it all. I have a stack of books by my bedside that I’ve been meaning to get to that I have not even touched, because I’m just so alarmed, fascinated, and disturbed by the news, and I am trying as hard as I can to keep up with it. Again, weirdly enough, given the handicaps that we have to face in terms of reporting, the reporting that I see is quite good. I’ll recommend two articles to you among the thousands it seems like I’ve read. The New York Times had a very good piece about the Trump administration’s response yesterday. This was a story that The Post took a crack at a few days earlier, both of which came to essentially the same conclusion. But I highly recommend both of those to counter the propaganda that’s coming out of the White House, about how wonderful the response has been. I think the reporting shows something else.

On this episode of #thePENpod, we speak with YA author @robertchow about his forthcoming book DAVID TUNG CAN'T HAVE A GIRLFRIEND UNTIL HE GETS INTO AN IVY LEAGUE COLLEGE, and on the pressures and universal experiences young people are facing. LISTEN 🎧: https://bit.ly/3gIp1vv