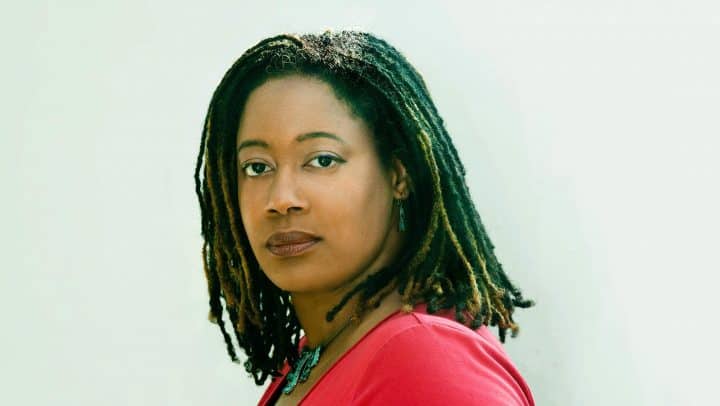 On The PEN Pod today, we spoke with New York Times-bestselling author N.K. Jemisin, the first author to ever win three consecutive best novel Hugo Awards for her sci-fi trilogy, Broken Earth. She has also won a Nebula Award, two Locus Awards, and a number of other honors. Her latest book, The City We Became, was released this past March. We spoke with her about the parallels between science fiction and today’s society, as well as how readers may be interpreting her work right now.

You’re very active on Twitter, especially in the sci-fi literary community. What are the conversations looking like there, and how do you think it’s informing that community right now?
In science fiction, there’s a lot of post-apocalyptic stuff. So, there are a lot of us who are like, Octavia Butler was right, or William Gibson was right. There are so many people who were right, right now. There have been stories about pandemics and about societal responses. But the sort of general conversation is the fact that none of us really expected this degree of a strange, confused response. Many stories or many literary reactions to the idea of a pandemic either posit that we’ll have a strong government that reacts quickly, but just can’t deal with it because germs are powerful, or that we’ll have bit of denial, but then people will straighten up, and the people who know better will actually take over, and then we’ll finally have an intelligent response.

“This response is not what anybody was anticipating—states having to compete against the federal government to get the needs that they have met, the federal government basically issuing false information and trying to get people killed—I mean, I don’t know what to think. The prevailing joke in my end of Twitter is that none of us could have written a story that had this kind of subplot because our editors would have been like, ‘It’s unrealistic, go back and do it again.’”

This response is not what anybody was anticipating—states having to compete against the federal government to get the needs that they have met, the federal government basically issuing false information and trying to get people killed—I mean, I don’t know what to think. The prevailing joke in my end of Twitter is that none of us could have written a story that had this kind of subplot because our editors would have been like, “It’s unrealistic, go back and do it again.”

Your new book is about New York City facing a force ready to destroy it, but it also reckons with these themes that we deal with in this city and in cities across the country all the time, like gentrification and equity. How do you think people might be reading this book right now?
What I’m hearing from people is that they’re reading it as some kind of metaphor for the current moment, for the pandemic. But the book was written almost two years ago, given the vagaries of the publishing world. So obviously I wasn’t thinking about a global pandemic at the time. I was thinking about a sort of slower motion, systematized destruction that I’ve been seeing happen in a lot of cities—not just in the United States, but around the world, and that was what I was speaking to.

In New York, for example, we’ve got a huge homelessness problem. But meanwhile, we’ve got entire high-rise buildings that are completely empty, full of apartments, but no one lives in them because our laws allow certain landlords to come in and basically just create condos as investment property, and the value declines if you ever let anybody live in it. So we’ve got big empty buildings and people stripped of places to live because the housing market is sort of artificially kept high by these kinds of things. What I’m beginning to understand is that this is a slow-motion viral plague of its own. It’s slower than coronavirus, but it’s no less harmful in the long run to the health of, really, any large urban environment.  And so, I’m not sure what to think of it, but people are definitely seeing the parallels.

“What I’m beginning to understand is that this [gentrification] is a slow-motion viral plague of its own. It’s slower than coronavirus, but it’s no less harmful in the long run to the health of, really, any large urban environment.”

Obviously, this will be the first of a series of texts around this idea of great cities declining. Why the choice to focus on cities for this coming series?
I don’t really make a choice to focus on the things that pull my creative attention. I had an idea for a short story several years ago. I actually wrote that short story—“The City Born Great”—which you can find in my short fiction collection, How Long ’Til Black Future Month?, and also free online at Tor.com. When I wrote and published that story, I really thought, “Well, you know, if I went anywhere else with this, it would be like, ‘Blah, blah, blah, and blah.’” But at the time, I was deep in the middle of writing the Broken Earth series, and I did not have time to get to it. I really wasn’t thinking that I wanted to write an urban fantasy next. But then the Broken Earth series took a lot out of me. It’s a dark trilogy of novels; I wrote it while I was dealing with my mother’s death. It took a lot out of me, and I needed a palate cleanser. So I thought, “Why don’t I continue with that idea? Why don’t I do something set in my own hometown? Why don’t I make it fun and silly, and a love letter to New York?” But me being me, of course, I had to toss in lots of gloom and doom, and tentacles and horror. So, yeah, for me, this is lighthearted.

Finally, what are you reading right now that’s either giving you some distraction or more context around what we’re all facing?
Right now, I’m honestly reading a little bit of nonfiction because I’m still doing research for the next book of The City We Became,  and we will see if that ever has any kind of useful bearing on the second book. But right now, it’s difficult to write. I mean, when you turn on the TV and you’re constantly like, “Okay, do I need to go and get food?” And, when you’re concerned about the basics of daily living, it’s difficult to be creative. Right now, I’m allowing myself the freedom to not write and to not read anything serious. So, I’m reading a lot of junk. I’m reading a lot of fanfiction. I’m reading escapist novels on purpose. And it’s exactly what I need right now.

The PEN Pod: On Facebook Bans and China’s Influence on Academic Freedom with Suzanne Nossel

The PEN Pod: On Filipino American Activism and Journalists as Storytellers with Michi Trota

Writer and educator Kent Ewing weighs in on the impact that Hong Kong's natural security law has had on classrooms, expressing concern over how teachers will now "approach the now-taboo topic of free speech," without losing their jobs. https://bit.ly/31mb2Gd