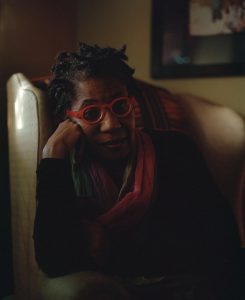 In today’s episode of The PEN Pod, we spoke with poet, novelist, and essayist M. NourbeSe Philip, who received the 2020 PEN/Nabokov Award for Achievement in International Literature. Born in Tobago and based now in Canada, M. NourbeSe has written extensively on the experience of the African diaspora, and as our judges this year said, issues searing indictments of oppressive structures. We spoke with her about the transformative power of poetry and what the current pandemic has revealed about our interconnectedness.

There are a lot of people that we’ve talked to even on this podcast who have said they’re turning to literature, and particularly poetry, for solace and understanding right now. Why do you think that is?
One of the things that I’ve always said about poetry in the face of idiotic comments such as “poetry is dying” or “it’s a lost art form” is that, for me, poetry is language under pressure. That’s how we poets work with language. When language is put under pressure, there are moments in our lives when we turn to an art form that responds to that. So, for instance, with poetry—we think of death, birth, love—those liminal moments when we don’t often think of the novel that we want to turn to. Although, in today’s time, people are reading works about plagues and so on; I myself want to revisit Camus’ The Plague. But I think poetry has a particular function to play in these liminal moments when everything seems so uncertain, that it offers some sort of solace, although it doesn’t necessarily offer us answers.

“I think poetry has a particular function to play in these liminal moments when everything seems so uncertain, that it offers some sort of solace, although it doesn’t necessarily offer us answers.”

This pandemic has exposed so many ruptures across our systems. As someone whose work is focused on calling out oppressions, do you think that we can learn or take away anything on the other side of all of this?
I’m certainly hoping that we do because I think our very survival depends on it. The process, to me, during this particular period has been one of looking back, actually more so than looking forward, because I don’t think any of us really knows what life after is going to look like, and I’m hoping that there will be an after. But certain things strike me right away. The first thing is that in the face of our tremendous accomplishments in digital technology, like AI and gene splicing, we remain so vulnerable as human beings that this tiny, invisible to the naked eye virus can wreak so much havoc—of course, because our world is so much more interconnected in a technological sense that it sort of extends almost in an infinite way. So that’s the first thing that strikes me: how we all share in that vulnerability.

The other thing that strikes me, and people might disagree with this, is that we have been here before. Not just necessarily in terms of plague, but we have been here before. I wrote in a piece recently that you may have seen, “Covidian Catastrophes,” about when colonial powers went out across the world and began disrupting societies that were millennia old and disrupting ways of doing things. Of course, those societies were not as interconnected as we are now, but I think that there’s a similar sort of havoc that was wreaked that, in fact, we’re still dealing with today. And one of the things that I talk about in that little piece was the fact that it seems to me that this virus almost replicates the virus of greed that has so besmirched the world, and that I think the human efforts to come up with ideas like democracy, like socialism, like ways of living in community, have been ways that we have been trying to inoculate ourselves against this virus. And there is a sense in which when I think of the virus, I think the virus is only doing what the virus does.

In a similar sense, we humans do what we have to do, and in many instances we have behaved just like this virus. We have consumed the world. We have destroyed the world. We have taken without putting back in. The difference, though, is the virus doesn’t have a mind. So there’s a sense that the virus is completely amoral. There’s a sense in which we have behaved not necessarily amorally, but immorally because we do have minds; we do have a sense of justice. And what this has done is it has revealed all those structures—inequitable structures—that have caused so much grief. And as I said in that piece, there is a sense in which, without wanting to compare, we are not as badly off as some people who are now in refugee camps, people who are being held as they try to cross borders. And all these things are so interconnected and so equally fragile. It just makes me so humble, and it brings me to tears.

Do you find that that is animating your writing right now? Are you able to take that and put it onto the page, or do you find that it’s just difficult to focus on your craft at this moment?
I think both things. We think that we have so much free time now, but the time is not really free because it’s so shot through with anxiety, with conversations about attempts to not talk about it, attempts to try and take your mind off of it but it keeps on coming. And so for me, it’s a combination of both. At a time, I was very moved to write that piece because I was just so overwhelmed by what was happening. It seems so much has happened in the last week or so, but then there are times when I sit and I feel like I have to write something. I’ve been working on a little poem the last couple of days because there’s a phrase that I hear a lot: “We are in this together.” It’s true that we are all in this together, but there’s a sense in which we have not been in this together. How can we be in this together—truly in this together—as all bodies are in this together right now?