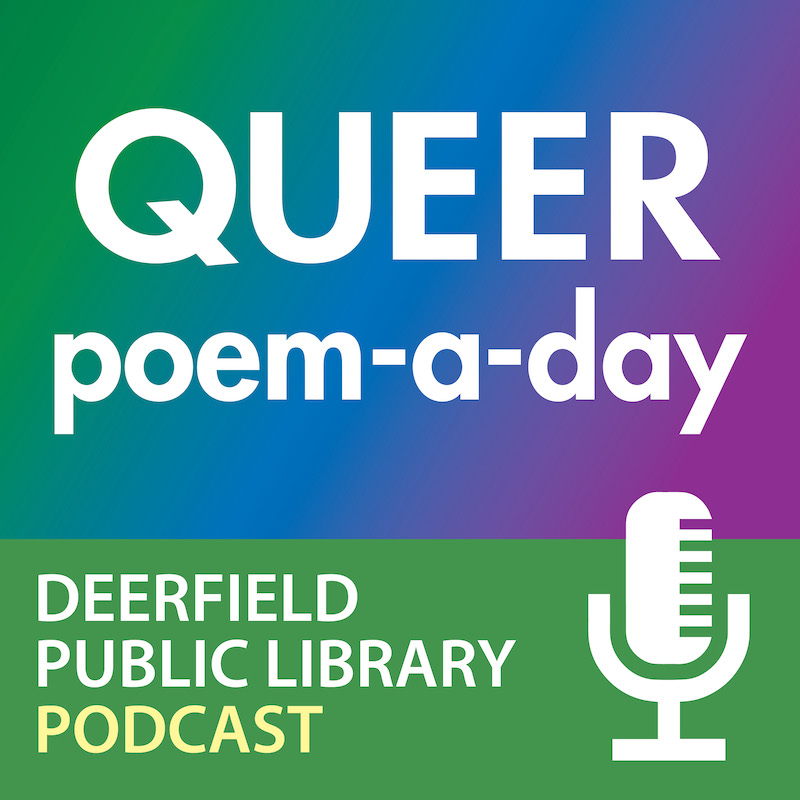 This week on The PEN Pod, we spoke with Lisa Hiton and Dylan Zavagno, co-creators of the acclaimed podcast series “Queer Poem-a-Day”, about the development of their project and its growing significance in the LGBTQ+ community. We spoke with Lisa and Dylan about the liberating impact of libraries, the role of identity politics in the literary arts, and the landscape of queer poetry today. Listen below for our full conversation (our interview with Lisa and Dylan is up until the 13:31 mark).

On How the Idea for “Queer Poem-a-Day” Came About

DYLAN ZAVAGNO: “I was doing an interview with Dan Chiasson, the poetry critic for The New Yorker, and I talked to my beloved former English teacher, who said, ‘Oh I have another former student, Lisa Hiton. She knows Dan Chiasson. Why don’t you go talk to her?’

“So part of my prep was talking to Lisa, and we connected over so many things, including this mutual experience of going to the Deerfield Public Library as young adults and finding the queer books on the shelves that we maybe weren’t taught in schools. And Lisa said, ‘I have this idea to do this sort of queer poem a day series.’ There’s a lot of poem-a-day podcasts out there, but none really dedicated to the LGBTQ community. So we really saw an opportunity to highlight this vital community apart from our regular interview series.”

On Using Poetry to Get Through COVID-Induced Isolation

LISA HITON: “During COVID, everything was so lonely at the beginning. And for myself, what became a consolation on my long walks or in bleak moments of just feeling very by myself, particularly in those early months of COVID, were lines of poems. It just has this particular power that other genres and art forms don’t have to enter the reader’s mind and body and live there, almost like what I imagine other people feel about prayer. This project was a way to get people together virtually, particularly artists, and give them a platform where we could be celebratory and rebellious with all of those notes of Pride Month.”

On Identity Politics and the Current Landscape of Queer Poetry

HITON: “The first thing I want to say is that identity politics have become a forefront instigator of so much of our rhetoric, at least in America and the arts on the left. And while that has been really breathtaking in a lot of ways, I hope that this program gives us a little bit of actually slowing down the discourse to say that, instead of thinking about how any kind of poetics might tokenize or stereotype whatever body it comes from, if we gather all of these things together, what we’re just seeing is a larger cultural contribution. So I think queer poetics right now, at least as the poems that we have are beginning to tell us, say a lot about revolution, image, form—form being an equivalent to the body itself.

“I think also in general, being queer. . . there are other ways that all of our language and bodies can be received by any given public or community that are less kind. So I think also buried in these poems and all queer poems, are our many ideas and questions about resilience and bravery.”

On the Importance of Libraries

HITON: “Libraries are places where you can go and be alone and not be watched. For me, as a young person, it was that there were no adults watching or policing me, let alone other people in my peer group. And that gave me such freedom when finding works by the likes of Jeanette Winterson, Walt Whitman, or James Baldwin. There’s just a kind of privacy that can happen between a page and a reader. Queer poetics have always come from that because of our necessary repressions for safety, and they always give back in that way, and I hope we’re just making it accessible and rippling it out to larger and larger audiences to understand how we’ve always been contributing to literary arts, and we haven’t always been respected or free to do so.”

The PEN Pod: On Threats to Journalists, Information Ecosystems, and Critical Race Theory