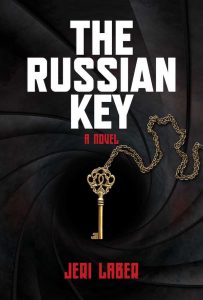 This week on The PEN Pod, Jeri Laber, a founder of Human Rights Watch and former PEN America Board member, speaks with us about her debut novel, The Russian Key, and describes an event from 1954 that inspired the book. Jeri also breaks down what human rights issues she sees today in the world, how she hopes they might become rectified, and offers insight into her personal history with taking undercover trips to the former Soviet Union for Human Rights Watch. Check out the full episode below (our interview with Jeri begins at the 15:33 mark).

On the Origins of the Novel

“The idea for the book was inspired by a real-life event that happened in my life many decades before the human rights movement even began. It was in 1954. I was a graduate student at the Russian Institute of Columbia University, and I and three other students were the first to be granted visas to enter the Soviet Union after Stalin’s death. . . . Our trip was highly monitored, but the Soviets wanted to show us their best image, and they took us to museums of the revolution and to young pioneer camps and model collective farms. Our main disappointment and frustration was that we were unable to meet with ordinary Russians, to talk to them, to see how they lived, what their lives were like, what they were thinking.

“Then, when I was leaving the country, I did something really stupid, really reckless. When the customs officials told me that I couldn’t bring undeveloped film out of the country, I tried to smuggle it out, hidden in my suitcase. And I thought I’d gotten away with it. I was in the plane, the engines were revving up, then suddenly they stopped the plane, they opened the doors, they came in, asked for my suitcase, opened it, took the film, and then sent me on my way. They could have arrested me—I’d literally broken the law, but fortunately they didn’t. So, thinking back on that experience—I was a very young girl at the time—I took that trip as a starting point for my novel, and I turned it into fiction.”

On Freedom of Expression in Russia Today

“It was technology which really brought about all the difference, ultimately. Before the mid-1980s, they tried to keep technology out of the hands of people—they saw it as a threat to their total rule, and they were right. Ultimately, technology was one of the major factors in the fall of the Soviet Union. Back in those days, it was really up until the mid-1980s, things like government fax machines were kept under lock and key, and ordinary people had no access to any kind of information. They didn’t know what was going on in the outside world, and more importantly, they didn’t know what was going on in their own country. Today, we have protests like those surrounding the case of Alexei Navalny. That would have been unheard of back then. But there’s a true civil society in the Soviet Union today, and when that was allowed to develop, there’s really no turning back.”

On the Future of the Human Rights Movement

“The human rights movement now is facing more problems than ever, and it’s more necessary than ever before. We have serious human rights problems in the United States, and we’ve lost what we probably should never have had—the force of our own morality that we thought the world should emulate. We’re having to face up to serious problems in our own country before we’re taken seriously as a beacon for the rest of the world. . . . My hope is that Biden will speak out on human rights abuses as he sees them in other countries.”

The PEN Pod: On the Arrest of Raman Pratasevich and Free Speech on Social Media

The PEN Pod: Online Abuse and the Threat it Poses to Free Speech with Viktorya Vilk

The PEN Pod: Empowering Youth to Use Their Voices with Jessica Bohrer