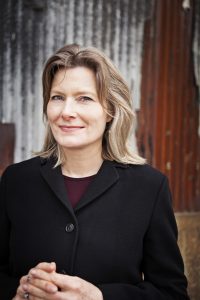 Our guest today on The PEN Pod is novelist, short story writer, and PEN America President Jennifer Egan, who recently had her own experience with a suspected case of coronavirus. Jennifer is the author of the Pulitzer-winning novel, A Visit from the Goon Squad, and her most recent work is Manhattan Beach, which was awarded the 2018 Andrew Carnegie Medal for Excellence in Fiction. In addition to being a transformative voice in American literature, she is also a journalist who has written frequently for The New York Times Magazine. Jennifer spoke with us about her personal experience with the coronavirus, how the pandemic is affecting writers, and the power of collective resilience in times of crisis.

I wanted to give you an opportunity to talk about your own personal experience with the coronavirus.
I’m undiagnosed, like so many, but I am basically just emerging from three weeks of illness, which was very difficult, even though I had an extremely mild version. I never had trouble breathing, but I was diagnosed by phone by my doctor and did find—and I’m someone who is in pretty excellent health generally—this was a circuitous process that really took a full three weeks to emerge from, and it was tough. I had a lot of fevers. The symptoms seemed to change, but not really go away. So it took a lot of patience, which is not my strong suit. But basically, I feel very lucky to never have had breathing trouble and never have had to go to the hospital, and I’m just relieved to be feeling better.

“I think of literature as really the dream life of the culture that creates it. So by engaging in it, we are entering into the dream life of a different time and place, and there’s just nothing quite like it.”

How do you see this pandemic affecting the literary community, and what kind of toll is it taking on writers?
Obviously, some people are ill, and let’s hope that they all recover, so that’s number one. I feel terribly for the people whose books are coming out now or were supposed to come out now. The thing that’s so tricky about writing books is that it takes an incredibly long time—it’s years of one’s life, generally. And then you really have a couple of months in which to try to make something happen in the culture—through, often, live events—and those are a really important part of the process, which I’ve really come to rely on as closing the circle of solitude in which the writing happens to connect with readers and have the experience of reading aloud, getting feedback. All of that is now gone, and we’ve moved into this virtual realm, which I think is a lot harder to work in, especially because everyone’s work lives are virtual right now, so it’s hard to distinguish. There’s something so precious about a live event. I personally feel like I’ve never appreciated that more in my life. So I really feel for the writers whose books are coming out now or soon. That was carefully calibrated, no doubt, to avoid the election and other hazards of this fall, and I just very much hope that these writers can thread the needle and connect with an audience.

A lot of the conversations we’ve had on this podcast have been about literature as a comfort. What role do you think the written word can play at this moment?
For me, there’s nothing that provides a better escape, although sometimes there has to be a catalyst into that escape. In other words, we’re addicted to the news. We’re watching Governor Cuomo every day. We want to know the stats. And that can become a loop of information that is immediately satisfying because we’re getting information, but doesn’t really do anything beyond that. For me, sinking into literary experience is like entering another dimension. I think of literature as really the dream life of the culture that creates it. So by engaging in it, we are entering into the dream life of a different time and place, and there’s just nothing quite like it. I value it hugely. I just read Drive Your Plow Over the Bones of the Dead by Olga Tokarczuk—amazing, and also really transporting because we’re talking about postwar Poland. It’s a really different world. I’m also reading The Mirror & the Light—complete escape, although there is something about our current moment that actually feels sort of medieval. So I’m just a huge believer in that. One secret weapon that we writers have is that we don’t have to be hired to do our work. We don’t need permission. We can just do it. And I think in a certain sense, witnessing to this moment, letting that dream life of this moment happen in the literary sphere is really all of our obligation, to the degree that we can overcome the distraction. And of course, that’s the big hazard of trying to write, is finding that focus through distraction. We are performing a service that will be vitally useful to those who follow us.

“My hope for this moment is that we too come out of this with some pretty radical changes to our lives.”

How can we support each other right now as readers and writers?
For me, it’s pretty simple. Buy books, read books, and probably number one—talk about books. It’s amazing how often the talk turns to television, even among literary people. I think it’s just habitual. First of all, it’s easier to find people who are watching the same shows. You can pretty much bet that if you say Tiger King right now—and look, I’m enjoying it, too, don’t get me wrong—but I ask of myself to always ask other people, “What are you reading?” And it’s interesting how it seems to lead to deeper discussion ultimately than “What are you watching?” And for all the great TV out there, honestly, I find that if it’s a choice between reading and watching, I read. It just feels like a deeper satisfaction and also a kind of insistence, in my own life anyway, on the importance of this practice. So I think, just keep literary culture alive by insisting upon its centrality. That’s what we can all do.

In your book Manhattan Beach, you presented us with this opportunity to view the city through the prism of crisis and the upheaval that was happening in the mid-century. What do you think now when you look out your window, when you think about New York City? What can you say about its resilience amid a time of yet another crisis?
What I would say generally—and this is something that I saw in my research for Manhattan Beach and have seen at certain times personally—human beings are unbelievably adaptable and resilient. We underestimate that aspect of ourselves, I think partly because we’re such creatures of habit, that it can be hard to imagine living in radically different ways, because we’re so used to whatever we’re doing at a particular moment. But what I saw during 9/11 when I was also living here, what I saw through my research for Manhattan Beach, is life in New York has changed radically many times. In the wartime period, it was incredible what happened—women did work they had never done before, people of color were integrated into American life in ways that they hadn’t been before. Our habitual nature, which makes all of that hard to imagine, is also what makes it possible because we reacclimate to new circumstances pretty quickly. The war ended, and there was a thought of just reverting to life as it had been before. The women were all fired and were pretty much expected to go back home, or go work for the phone company, or as a secretary—the jobs that women had before the war—and people of color the same. But if you look at the civil rights movement, which exploded in the early ’60s, to me, there’s such a direct through line there. In a certain way, it was not possible to reinstate the old modes of life after these changes.

My hope for this moment is that we too come out of this with some pretty radical changes to our lives. I’d love to see a different notion of what value is, that doesn’t specifically mean monetary value. There are all kinds of value in our culture. We’re really seeing that. Underpaid healthcare workers are basically what are keeping us alive here in New York. We don’t value our physical environment. We desperately need to recalibrate that relationship. I really hope that this cataclysm becomes an opportunity for healing a deeper sickness in our culture that needs to be attended to desperately.

Students at dozens of universities are demanding their schools cut ties with local police; for the most part, universities have resisted doing so. https://bit.ly/2Mwfbzw

Attacks against journalists covering demonstrations against racial injustice have prompted foreign governments to call on American authorities to respect press freedom and protect reporters, both local and foreign. For the US, it is a role reversal. https://nyti.ms/3gZFzjh

President Donald Trump pushes Americans to put the outbreak behind them and resume normal social and economic life. With the last White House Coronavirus task force briefing on April 27, the administration attempts to sideline and silence scientists. https://bloom.bg/3cAwU3x