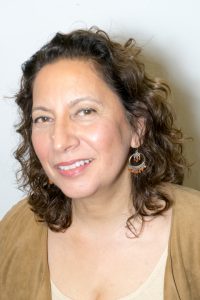 In today’s The PEN Pod episode, we spoke with journalist, writer, and teacher Fatima Shaik, who spent nearly a decade exploring the aftermath of Hurricane Katrina in her native New Orleans in a series of essays first published by In These Times Magazine and later in a short story collection, What Went Missing and What Got Found. Fatima is also the co-chair of the PEN Children’s and Young Adult Book Authors Committee. We spoke with Fatima about writing amid a crisis, the lessons learned in uncertainty, and resources that parents at home now can use to find diverse children’s books.

You have a lot of experience writing and reporting amid and after a crisis. What are some of the lessons that you took away from your writing post-Katrina that you think writers can apply now?
The first thing that I found out was that there are some things that you can’t control, and you just really have to accept that. So I would advise writers to be flexible and to live in the present. One of the things is not to be so hard on yourself if you’re not doing the things that you were doing before. After Katrina, I couldn’t write fiction for a while. Everything that I was seeing was so fantastic, I couldn’t describe anything more fantastic than that. I was seeing stop signs upside down and red lights that were red and green at the same time. It was just a little bit more fantastic than I could describe, so what I wound up doing was switching gears and going back into nonfiction. That’s how I started writing first-person essays. I think that when you’re in times when your imagination is clogged because too many things are happening, it’s a good time to have observation and reflection in a Zen-like way, and things will show themselves, later, what they’re really supposed to be about.

“When you’re in times when your imagination is clogged because too many things are happening, it’s a good time to have observation and reflection in a Zen-like way, and things will show themselves, later, what they’re really supposed to be about.”

Are you finding yourself compelled to be writing right now? And do you feel you can focus?
I’m working on a memoir, and I did some historical work before, and I’m doing some editing. So I am doing that. Focus is not easy. What I’m focusing on in my writing are the small things that I may have skimmed over before. I’m taking a lot more time with description and being able to impart description as metaphor, so I’m bringing my emotions to my descriptions.

We don’t quite know how this story is going to end, and right now, we’re kind of in this period of uncertainty. Do you find that that’s at all similar to your experience after Katrina?
I wouldn’t say that Katrina was something that came and went, really. It was a constant uncertainty. It is still uncertainty. We didn’t know then who was going to survive and who wasn’t going to survive, just like now, except now it’s a virus, so it’s a little different in that way. But we had elders that were in nursing homes, and we didn’t know where. There are a lot of parallels in that way. That uncertainty can sort of be tamed, for me, by talking to other people and sharing on the phone, and by focusing on small things, small pleasures—a cup of tea in the morning, growing a plant, or taking classes online. Just small little things that you may not have had time for before, and then being grateful for that.

“That uncertainty can sort of be tamed, for me, by talking to other people and sharing on the phone, and by focusing on small things, small pleasures—a cup of tea in the morning, growing a plant, or taking classes online.”

You help head our Children’s and Young Adult Book Authors Committee. Are there any books that you’d like to recommend to parents at home with their children out there?
I have some resources that I’d like to recommend. The AALBC has the top 150 recommended African-American children’s books, and I would recommend to parents that now they may want to read from an ethnicity that is not theirs. Lee & Low Books is also good for that. The Ink Think Tank is a nonfiction group of authors that speak to children. Just Us Books has been in business for about 25 years, and The Brown Bookshelf. So there are a lot of resources online that parents can use, and go from there.

What happens if, in a fit of fury over being fact-checked by @Twitter, the President samples a bunch of off-the-cuff fulminations with a warmed over, never vetted draft decision directive? Today's #ExecutiveOrder on social media. https://www.washingtonpost.com/technology/2020/05/28/trump-social-media-executive-order/

$50,000 grants for civic projects throughout the United States have been awarded to 23 poets this year through @POETSorg. See the full list of Poets Laureate Fellowship recipients here: https://nyti.ms/2Bb7L2s.