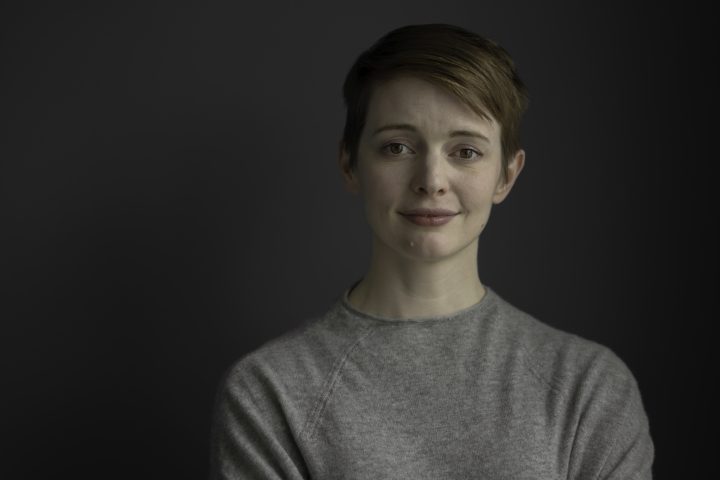 In today’s episode of The PEN Pod, we are joined by Emily St. John Mandel, who is the author of five novels, including most recently, The Glass Hotel and Station Eleven. Station Eleven, which was a finalist for a National Book Award and the PEN/Faulkner Award, has won the 2015 Arthur C. Clarke Award, among other honors, and has been translated into 33 languages. We spoke with Emily about the comparisons many readers have made between Station Eleven, which takes place in the aftermath of a fictional swine flu pandemic, and our current moment; what inspired her new book; and her writing process.

Do you find this to be a productive time for yourself?
No, not at all. It’s interesting. My Twitter timeline is kind of evenly split at the moment in terms of who has time and who doesn’t, which seems to boil down to who’s suddenly a homeschooling parent and who isn’t. So, you know, life without childcare is a new thing to get used to. But also, let’s be honest about the psychological impact of life in the red zone. I hear ambulances all day. It’s been harder than I would have imagined to focus. On the other hand, that means I’ve gotten more reading done than I would have expected, so that’s been kind of nice.

Obviously, there are so many parallels in Station Eleven with our current moment. I cannot imagine how many people have asked you to try to make the comparison.
Really everybody! It’s fine. It’s kind of the contagious elephant in the room; I completely understand the line of questioning. The thing with Station Eleven is that when I was writing it, I spent a certain amount of time reading about the history of pandemics. And what very quickly became obvious to me is that pandemics are something that happens to us, and it hasn’t happened in a long time, so maybe we’ve kind of lost sight of that. But epidemiologists talk about pandemics in the same way seismologists talk about earthquakes, in the sense that nobody’s talking in terms of if there will ever again be another earthquake. There will always be another earthquake, and there will unfortunately always be another pandemic. So, it’s interesting how reading about that and knowing that intellectually, it doesn’t really actually prepare one for the terror of living through a pandemic. But there is, at the same time, a certain comfort in it, that this is something that our ancestors endured, and something that our descendants will endure, and our society—or maybe I should say humanity— has endured through all of that.

Do you find it either odd or heartening that people are turning to Station Eleven right now, and lots of people are reading it again?
Yeah, that’s been really unexpected. I guess we tend to project our reading habits and preferences on other people, but I would not personally read a pandemic book during a pandemic. So, at first, I found it really odd. But I have been hearing from people that what they’re responding to in Station Eleven is that it is ultimately a hopeful book. The pandemic in Station Eleven is vastly worse than what we’re living through now, as awful as this is. And yet, it is still a hopeful book. There are Shakespearean theater companies in the aftermath.

Let’s talk about your new book, The Glass Hotel. What was the trajectory from Station Eleven to then writing this book?
The trajectory was, I was fascinated by Bernie Madoff’s Ponzi scheme, which, of course, collapsed in New York City about—gosh, I guess it was almost 12 years ago now. And something that I do like to emphasize, is that there are no real people in The Glass Hotel. So it’s not actually a book about Madoff, his real investors, his real family, or his real staff. But I was fascinated by the scale of his crime, and the crime in the book is the same. I’d had this idea for years about writing a book that focused pretty narrowly on this massive white-collar crime. It was going to be focusing on the various constituencies there—the investors, staff, Madoffian characters, and trophy wife. But the thing is, I don’t write from an outline, which has pretty obvious disadvantages. My first draft is catastrophic, usually. But a real advantage to that approach is that there is a possibility of surprise—sometimes, my books can go in really unexpected directions. And that definitely happened here, where after several years of writing and revision, I realized that I ended up with this book that, although it does center around a Ponzi scheme, it could also just as accurately be called a ghost story with a Ponzi scheme in it. It’s been a very difficult book to try to describe. It really resists my attempts at an elevator pitch.

“The pandemic in Station Eleven is vastly worse than what we’re living through now, as awful as this is. And yet, it is still a hopeful book. There are Shakespearean theater companies in the aftermath.”

In the same way that you did so much research for Station Eleven on pandemics, did you find that you took the same approach to doing research around Madoff and the collapse of his scheme?
Yeah, I did, and that was fascinating. For me, often the books I write, they center around some topics that I just find independently interesting. So, I’ll do a ton of research before I even realize that it’s research. I was just really interested in that crime and read a lot about it. But once I decided that I was going to write a book that had that same crime in it, then I started doing much more research. There are at least a couple of really great books written about the crime. The two that I especially liked were The Wizard of Lies by Diana B. Henriques, which was turned into a fairly awful TV movie—the book’s way better—and Too Good to Be True by Erin Arvedlund. Those books were great in terms of just getting a better grasp of the mechanisms of the Ponzi scheme. I also spent a lot of time reading court transcripts, which I have to say were fast as well. It’s all there online—every word from every trial—so that was sometimes difficult to read. The victim impact statements are wrenching, but fascinating.

Did you feel like that then helped inform the arc that you took for The Glass Hotel?
It definitely helped to have a good enough understanding of the crime to be plausible, in the context of a work of fiction. This was not a work where I needed to do a ton of research. I don’t have characters expounding on the mechanisms of various investment vehicles or whatever, which is good because I have zero background in finance. But yeah, if I’d been writing a book like that, I would’ve gone out there and interviewed a lot of experts. For the level of research that I needed to do, that was sufficient and really interesting.

You said you’re finding time to do more reading. What are you reading?
I’ve been reading novels. I just finished reading the new Colum McCann novel, Apeirogon, and the title makes sense in the context of the story. I hadn’t known this before I opened it up, but an apeirogon is a shape with an infinite number of sides, and it’s about the Israeli-Palestinian conflict—so kind of a perfect title there. It’s very well-rounded, almost excessively well-rounded. He really looks at every possible angle, from the design of munitions, to the history of falconry. I think the next book I’m going to read is Daisy Jones and The Six by Taylor Jenkins Reid. I’ve got it on my desk here. That’s one of those books. I don’t actually know that much about it, except that people have been telling me to read it for years.

"Literary brain space has given way to culinary flexing," says author James Sie (@siejames) in our latest edition of Writers Who Cook. Join James in whipping up his go-to "one-pot wonder": https://bit.ly/38lVlRY.

Turn up the music this long weekend with @penworldvoices' Just Press Play - a playlist series curated by our favorite authors, reminding us that in our moment of social distance, music, like books, is an international instrument of connectivity: https://bit.ly/3gf3NF8.