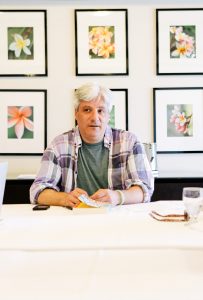 Today on The PEN Pod, we spoke with David L. Ulin, an essayist, editor, and novelist who also worked as the book critic at The Los Angeles Times and was a 2015 Guggenheim Fellow. He’s the author of 10 books, including Sidewalking: Coming to Terms with Los Angeles, which was a finalist for the 2016 PEN/Diamonstein-Spielvogel Award for the Art of the Essay. David spoke with The PEN Pod about reading during troubled times, why he’s turning to plague classics now, and how he’s staying connected to the literary community.

You’re the author of several books, including The Lost Art of Reading: Books and Resistance in a Troubled Time. How do you see reading as getting us through this major global crisis right now?
I’m not sure any one thing is gonna get us through this global crisis. For me, reading is useful for a couple reasons. There is that escape element, and I don’t want to minimize that as a way of forgetting about the world around you for a bit, but also for me, it’s a way of entering into the world around you in other ways. I’ve just spent the weekend rereading a couple of plague classics, for want of a better phrase—Daniel Defoe’s A Journal of the Plague Year and Albert Camus’s The Plague—not to depress myself or further increase my anxiety, but just to remind myself that this isn’t the first time people have gone through this kind of situation, and that, in fact, until fairly recently in human history, it was a pretty regular occurrence. I want to be aware of that sense that we want to have the expectation of survival, but we’re always living under the shadow of our own mortality, and somehow, maybe if we’re lucky in those moments where we can step outside of the dread, it allows us to kind of be more present in the moment.

“We’re always living under the shadow of our own mortality, and somehow, maybe if we’re lucky in those moments where we can step outside of the dread, it allows us to kind of be more present in the moment.”

I’ve heard both sides of this argument: that reading books about pandemics and plagues is going to either freak you out or give you perspective. It seems like you’re falling in the latter camp.
I’d say a little bit of both. But yes, I think the hope is more in the latter camp, more in that sense of continuity, community, or even communication with other human beings—billions and billions of them across history who have gone through similar times and survived. Even in an era of contagion, we still have no choice but to live, and I’m really interested in not losing sight of that.

You were The Los Angeles Times book critic for many years, and I would imagine a lot of people are coming to you and asking you what they should be reading. What are you telling them?
One thing I’m suggesting people read is, what’s that book that you always wanted to read that you never got around to? Now seems like a perfect time. Not necessarily because time is short, but in some weird way, because we all live in isolation for the moment, time actually is a little bit long. And so, we have more time to immerse ourselves in a book that we might have been waiting for. Without picking specific titles, I kind of turn it back on people and say, what is it you’ve really been wanting to read?

“There are all kinds of ways that, not just as writers but as human beings, as members of both the literary community and the broader human community, we can create a series of venues for ourselves and for each other to talk about what matters.”

What is it that you’ve really been wanting to read, that you’re finally getting a chance to pick up right now?
I was thinking about reading War and Peace, which was sort of influenced by this A Public Space Yiyun Li digital book club that’s launching. I’m not sure if I’m going to do it, but that’s a book that I’ve always wanted to read. And it seems like, again, in terms of a long historical saga, difficult historical times, the broad historical frame and then also the individual frame, it seems like it might be a worthwhile book to take a look at.

What do you think about the idea of bringing the literary community into the virtual space right now, when we don’t have the opportunity to meet in person?
I think it’s essential, but I also think it’s kind of inevitable. The literary community already has existed for many years in the virtual space, if you think about literary Twitter, digital publications, and the sharing of pieces and things like that. People think of the literary community as somehow Luddite, but I think we’re all pretty engaged with technology and particularly communication technology, which makes sense since we are all professional communicators. I think that transition is maybe a little bit more intuitive for people who’ve been doing it for a long time. One of the things that I’ve been really gratified to see pop up in the last week or so are virtual readings, people promoting other people’s books. Every time I get a new book in the mail, which still happens fairly frequently, I feel terrible for writers who have books coming out the next month or two. People aren’t really gonna be buying books that much. So I think it’s really bringing out the community aspect of the literary community in some way, and I really am gratified to see that.

Besides going out and buying those books that are coming out now, how else can we support each other right now in the literary community?
I think if it’s possible, buying the books. We’re in a position where we’re homebound and have plenty of time to read, so I think reading and engaging with each other, talking about what we’re reading. I also think it’s useful for us to reach out just generally and see how people are doing. I’ve been doing some of that. Rebecca Makkai, I think, is a really good example of someone who’s been using her Twitter account to reach out and build community and ask people questions, offer them a space to vent. There are all kinds of ways that, not just as writers but as human beings, as members of both the literary community and the broader human community, we can create a series of venues for ourselves and for each other to talk about what matters. And I think that, emotionally, certainly is really powerful.

The PEN Pod: Writing as Witness with Wayétu Moore

"If any of my stores close it will not be because of Amazon or wages or a lack of support from my beloved customers," writes @mcnallyjackson owner, Sarah McNally. https://nyti.ms/3exErla

Tomorrow on our daily podcast #thePENpod, an examination of the weekend's events and what it means for the First Amendment. Tune in and subscribe here: https://podcasts.apple.com/us/podcast/the-pen-pod/id1503245440

Where can we look to find joy amidst the chaos of our present moment? As part of @penworldvoices' Writers in Residence series, Si'an CHIEN shares a simple process for preserving specimens of the natural world that delight & inspire her! See her video here: https://bit.ly/2yEDGHx