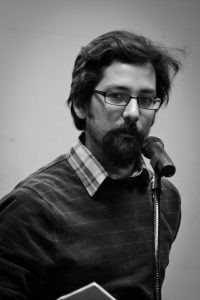 In today’s episode of The PEN Pod, we spoke with Brandon Shimoda, who has written half a dozen books and poetry collections. His most recent book, The Grave on the Wall, a tapestry of family history, place, and belonging that carries readers across the Pacific Ocean, won the 2020 PEN Open Book Award. Our judges called it a powerful work that is “unafraid to confront the injustice and state-supported acts of violence at the center of the book.” We spoke with Brandon about the inspiration for his book, the challenges of documenting intergenerational trauma, and finding emotional truths in poetry.

What compelled you to tell the family saga behind The Grave on the Wall?

It’s a book primarily about my grandfather. I originally wanted to write something about this photograph of him that I discovered in the museum that is in the ruins of the prison where he was incarcerated. It’s a photograph of him dressed as a woman. My original intention was just to write something about that photograph, and as I started writing, I opened up a hole, and I fell into that hole. The book was generated out of that long process of falling through that photograph.

Tell us about the journey that this photo took you on.
The photograph really became a portal to the next, I don’t know, at least half a dozen years of my life—I was traveling to the places where my grandfather had spent time in his life, where he was born, where he grew up, where we scattered his ashes in Death Valley. I thought maybe I was writing a biography, but it turned out that biography was the thing that actually repelled me. What I was interested in was all of the shadows and silences that constituted the backside of his biography. That’s the book that ended up being the result of that process—what I would consider the backside of a biography of a person.

“We’re in this moment where we’re all collectively undergoing this extraordinary trauma. But we’re undergoing it in a way in which it’s not entirely visible.”

The Grave on the Wall is a story of your family, but it’s also one of violence, injustice, and memory. How do you think people might be reading this book right now, or how would you like them to be reading this book right now?
I was thinking yesterday, actually, that we’re in this moment where we’re all collectively undergoing this extraordinary trauma. But we’re undergoing it in a way in which it’s not entirely visible. The components of the trauma, or the fact that we’re being traumatized, is not necessarily as visible as it might be if it was a definitive event, as opposed to something that is protracted and happening over time, without a clear ending in sight.

I was thinking about how that’s very much related to, not only the history of nations and history in general, but how the histories and stories of families are written in large part by the traumas of individual members as well as of collective experiences, and then how those traumas are passed down to successive generations, and how the descendants either make use of or feel debilitated by the trauma that they’ve inherited. It’s a frightening moment, in that it’s very slow, but very steady. The consequences of what we’re undergoing right now will not be even discernible until, maybe, generations from now. A lot of what I was thinking about in writing The Grave on the Wall was how all of that accumulation can land in the lap of a single subjectivity, and how each of us, as inheritors of our family’s experiences, have to wade through that and understand where we go from there.

“I think that there’s one way in which we want to eavesdrop on the experiences of witnesses. What we really need, and feel desperate for, are the eyes of a witness, and a witness who is looking at something through a creative, speculative, or critical lens.”

We’ve been talking to a lot of folks about how people are turning to literature right now, and many of them have said that they are turning to poetry in particular. Do you have any thoughts on why that is?
I think that people are always turning to poetry, and then they’re always turning away from poetry, and then always turning back to it. I think that there’s one way in which we want to eavesdrop on the experiences of witnesses. What we really need, and feel desperate for, are the eyes of a witness, and a witness who is looking at something through a creative, speculative, or critical lens. I think poetry embodies all those different possibilities. But I also was thinking that there’s something about literature that feels, to me, posthumous. Like everything that I read, whether it’s a poem,  short story, or novel, feels like it’s a report from the afterlife, so that there’s something consoling about imagining or inhabiting a space that has already endured the trauma, that has already endured the catastrophe. We can sort of imagine the solace of standing on the other end of something that feels, in a moment, unbearable. So for me, reading is a place I can turn to, but it’s also a place that helps me understand how to think and how to process what I’m going through from the perspective of the afterlife.

What are you reading right now?
I’m so scattered right now. I’ve started, like, twenty different books in the last three weeks. I think part of it is that I’m just trying to surround myself with as many voices as possible, in this moment of isolation. One book I’m reading is a series of five books. I’m only on the first book, but it’s by Han Suyin, and it’s a five-volume memoir/history of China. It’s extraordinary because it combines these extraordinarily beautiful prose passages with some of the most thorough, comprehensive history writing. Volume one is called The Crippled Tree. All five volumes have these really great titles. I’m on page 112 of volume one of five, and it’s going to take a while to get through them. I think that’s why I’ve picked up these books by Han Suyin.

In Jeff Rowe's @AP book review of Claudia Rankine's JUST US, Rowe says "Rankine will be helping America understand itself, one conversation at a time": https://bit.ly/3kUe0JJ. Join Claudia for #PENOutLoud on 09/30 to discuss JUST US with @proseb4bros: https://bit.ly/2XXutn1.

Join us this Wednesday 9/30 at 4PM ET for the first in PEN America's fall series "Free Expression and the Humanities" organized with the Institute of the Humanities & Global Cultures at the University of Virginia. Register: https://ihgc.as.virginia.edu/free-expression-humanities-pen-americaihgc.