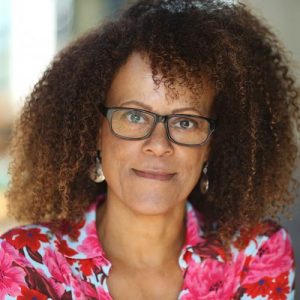 In today’s episode of The PEN Pod, we spoke with award-winning British author Bernardine Evaristo, whose eighth book, the novel Girl, Woman, Other, won the Booker Prize last October. Like many authors at this time, many of Bernardine’s spring events for her book were canceled, including our own PEN Out Loud event, which was scheduled to take place in March as a conversation between Bernardine and the award-winning poet Safiya Sinclair. She spoke with us about the process of writing Girl, Woman, Other; how she develops her characters; and what literature can offer us in times of crisis. Listen below for our full conversation (our interview with Bernardine is up until the 9:35 mark).

We’ve heard from many authors that they’re having trouble focusing on their writing projects. Are you able to work right now?
I’ve always got lots and lots of things on the go. I have an 86-year-old mother, and I have to go look after her twice a week, so I don’t really have a full week to get into things. But it’s surreal. I travel across London to see how she is—I live in West London, and she lives in Southeast London—and it’s so surreal to know almost exactly how long it’s going to take me to get there, because anybody who knows London knows that London’s an incredibly busy city, and you just sit in traffic for ages. But now the streets are almost empty, and you know that the journey will hardly stop, so it’s weird—also, the experience of being home and knowing that everything’s pretty much canceled. I should be touring for the next few months, but it’s all canceled, and we’re all in the same boat so to speak, and I’m just getting through my admin at the moment.

You told Vanity Fair, about your book, Girl, Woman, Other, that you wanted to “create as many black British female protagonists as you could get away with.” Tell me more about how you approached writing this book.
That was the plan, and I ended up with 12 primarily black British women. I began with one character who is a woman of Nigerian parentage, born and raised in London, who is a banker, and she comes from a working-class family. She goes to Oxford, obviously becomes hugely successful in her career. Then her mother emerged, through her childhood narrative. And then I moved on to her mother and gave her mother her own section, because—just to backtrack a bit—each character has their own chapter in the book. It’s not a book of short stories; it’s a cohesive novel. But they all have their own sections, and then they’re all interconnected. I began with Carole, and then Bummi emerged. And also through Carole, her childhood friend LaTisha emerged. And then through Carole, Shirley emerges, who is one of her school teachers. And so it grew organically. In the end, I had these 12 figures and was able to tell all kinds of stories about their lives.

Is that connectedness and that organic growth of the characters routine for your process?
I think each book is unique because I’m also quite experimental in terms of how I write. Each book has its own form. For some books, I begin with a stronger sense of where it’s going than others; some books I begin, and I kind of know what the ending will be, but I don’t know how I’m going to get there. With this book, it was incredibly organic, and I would say that is probably true to my style. I start writing, and then the story emerges through the act of writing. The characters start to come alive, and in a sense, those characters start to speak to me and tell me what they’re going to do, where they’re going to go. And that, for me, is the magic of writing. I’m not a plot-driven writer, even though if you were to look at Girl, Woman, Other, you would say it’s full of multiple plots. But actually, it’s a character-driven novel, and that’s what I’m really interested in. So it’s really about how do I bring these characters alive—whichever book I’m writing—and how do I make it interesting for the reader?

“When I begin the day reading a book, before I look at the news, before I check my Twitter or Facebook or Instagram, all those things, I find it sort of settles me. And I find it incredibly peaceful and enriching.”

A lot of people say that they’re turning to literature, especially fiction, to experience a degree of connectedness that they’re losing right now or that they feel like they don’t have. Do you feel the same way?
I think that’s definitely what fiction does, for sure, and poetry. A good book is incredibly engrossing, and you can lose yourself in it and be transported to somewhere else, and also just connect at a deeper level with humanity, especially, I would say, with fiction. So I do think that it’s interesting that we’re in this moment where people are turning to books, and I find that very hopeful. For myself, my experience of being in semi-isolation is truncated. I haven’t really been able to dig deep to get into some reading yet, but I hope to in the weeks to come. I find reading almost like meditation. For many years, when I got my first Apple computer, actually, it’s just so huge—24-inch screen, and so sexy and glorious and colors and great internet connection—the first thing I did every morning was to go on there and scroll through and scan social media, the news, and so on and so forth. At some point, I realized I’d lost something. And actually, when I begin the day reading a book, before I look at the news, before I check my Twitter or Facebook or Instagram, all those things, I find it sort of settles me. And I find it incredibly peaceful and enriching. Nothing else can produce that result, I think, for me.

You had to cancel your book tour because of the pandemic. How is this ongoing crisis affecting you, as well as the bigger industry and writers at large?
It’s so unprecedented. I think everybody’s suffering. Everybody is suffering, apart from, perhaps, the supermarkets or the toilet paper manufacturers. I just hope that we survive it, let’s put it that way. I’m a very positive thinker. I hope that whatever happens to the publishing industry, we survive it and continue to thrive once the coronavirus pandemic has passed. Especially for writers publishing in the moment, it’s very distressing for them, because suddenly all the things that have been at their disposal in order to promote a book have mostly gone. But as we said, you know, people are reading books, and of course, we have online retail now in a way that’s just incredible. I think and hope that people are going to continue to buy books and support writers and the industry that way—but not just to support them; it’s not a philanthropic gesture actually, to perhaps discover if they’ve left books behind or rediscover the joy of reading.

For my own career—I won the Booker in October; my book Girl, Woman, Other was published in May last year. So I’ve had a really good run. I’ve had the kind of dream run that any writer could ever hope for. I feel very grateful that all of this has happened before everything shut down. But everything has shut down—I should be touring, from a couple of weeks ago right through to the middle of next year—and I don’t know what’s going to happen with all those tours. But we have the internet, so we can keep in touch with each other in this way.

The PEN Pod: Recalibrating Our Priorities with Ruchika Tomar

As we get closer to #ElectionDay, you might see some of your friends and family sharing misinformation or even conspiracy theories.

@PENamerica offers some tips on how to successfully engage with these folks. https://bit.ly/3hPFm1q

Long arm of the Chinese government has now reached into @NYPDnews where an intelligence asset was snitching on the city's Tibetan exile community. #China leading export is authoritarianism. https://www.nytimes.com/2020/09/21/nyregion/nypd-china-tibet-spy.html?action=click&module=Latest&pgtype=Homepage