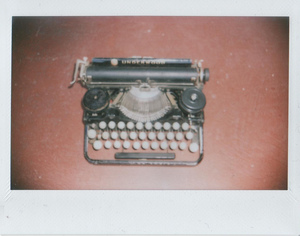 This week in the Guernica/PEN Flash series, we feature a piece by Osama Alomar. Subscribe to the Series and get new flash delivered to your inbox twice a month—no spam or news, just stories.

Despite his best efforts, the Author’s name began to slide down off the top of the book’s cover where it had been printed. The Author’s self-confidence had died long ago, but his name was determined to hang on to the spot where he belonged with all his might. He dug his nails into the smooth cover as the sweat poured off him, but his body, which had become unbelievably heavy, pulled him stubbornly down. Every so often he glanced fearfully into the abyss below him where terrifying creatures snapped their jaws hungrily. His tears mixed with his sweat. His body grew emaciated and his nails broke off. Clinging to the bottom edge of the cover he peered up with diminishing eyesight at the high peak where he had once sat. A moment later he dropped into the pit and was crushed by thousands of feet walking this way and that in a frenzied haste. As for the book, years later it was hailed as an anonymous literary masterpiece.

Born in Damascus, Syria, in 1968 and now living in Chicago, Osama Alomar is the author of three collections of short stories and a volume of poetry in Arabic, and performs as a musician. His short stories have been published by Vice.com, Ploughshares, Newyorker.com, Noon, Conjunctions.com, The Coffin Factory, Electric Literature, TriQuarterly, Gigantic, Dissent, Painted Bride Quarterly, Words Without Borders, and The Literary Review. New Directions has also published Fullblood Arabian, a pamphlet-sized collection, in 2014.