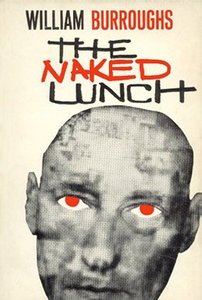 I like to think of The Naked Lunch as more of an espionage device than a book, or maybe an espionage device disguised as a book. The main purpose of the book/device is to infiltrate: the readers, the bureaucracy, the system, the paradigm, etc., and disrupt quotidian processes. It does this with a variety of mechanisms built into its structure: moments of discrete parataxis between sentences and paragraphs, nonlinear treatment of chronologic time, phantasmagoric imagery, a vertiginous depiction of protagonist as double agent. These mechanisms cause trigger responses in the reader that reveal the nature of the Naked Lunch book/device.

Take for example Burroughs’s comment that “Certain passages in the book that have been called pornographic were written as a tract against capital punishment in the manner of Jonathan Swift’s Modest Proposal.” The “pornographic” scenes in the book are a microcosm of the book/device’s function. The ostensible “pornographic” aspect of theses scenes acts like a trigger device: their sexual intensity, their violence, their fantastic imagery arrest the reader. Whatever response follows, whether nausea, excitement, embarrassment, etc., the reader is hooked; the mechanism has ruptured.

In a sense, the book was predestined to cause a censorial response, programmed, as it was, to infiltrate and disrupt. It seems likely that Burroughs, along with his editors and co-conspirators, Ginsberg and Kerouac, had anticipated the Boston censorship trail. Whether or not an attempt to ban the book would be successful, Burroughs et al. knew the book/device would perform its function successfully by garnering attention to its publication. This is another function of the book/device: its ability to utilize the mechanisms of control against the bureaucratic entities that wield them. The trail to ban the book becomes a marketing device.

Even today, it is difficult to find a recent printing of Naked Lunch that does not include a recounting of its censorship trial in an editorial note or introductory statement. In a sense, the trial of Naked Lunch helped usher it into the cannon of popular literature. Despite this, Naked Lunch is still a book read and handed off by interlopers and double agents. Much like the Boston obscenity trail, the content of the book has also managed to subvert the persistent, parasitic marketing mechanisms attached to it (i.e. the way in which the marketing of the book has inevitably come to include a recounting of its censorship; the labeling of the book as “Beat” literature). This resilience is a testament to the integrity of Burroughs’s work.

For me, the integrity of the Naked Lunch is one of its most important aspects. Had the book/device been poorly constructed, its function would have dissipated over time. But, even now, reading the book I can feel glitches in the code: the pulsating gore beneath the morning news, the junk dealer beneath the gray mask of the politicians face. Suddenly, again, the surface no longer hides “what is on the end of every fork.”