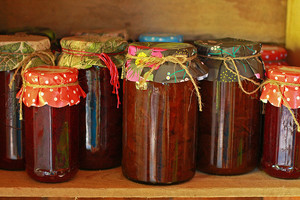 This week in the Guernica/PEN Flash series, we feature a piece by the Austrian-Jewish writer and journalist Joseph Roth, author of Radetzky March and a new collection The Hotel Years from New Directions. Subscribe to the series and get new flash delivered to your inbox twice a month—no spam or news, just stories.

Yesterday the nineteen-year-old laborer Franz Zagacki was sentenced to five years in prison. He had tried to kill his mother while she was peeling potatoes, first with an ax, then by asphyxiation, and finally by stabbing her. Then, supposing she was dead, he robbed her of a wallet in her petticoats containing two thousand two hundred marks, went to a tobacconist’s, paid his debts, bought cigarettes, invited his friends and his sweetheart who had helped him plan the deed to a cozy get-together in the flat of the apparently deceased woman, and went out to have himself a fun day. The mother, though, did not die, and the son was arrested and taken to prison for questioning.

Yesterday the mother stood in court and explained that she had forgiven her son. No sooner were the wounds healed that he had dealt her, than she was setting off to her son’s prison bringing preserves and other delicacies she had forgone. Even while she lay in hospital she was trembling for the well-being of her son, and if she had had the strength and if her lust for life had not prevailed when she was near death, then she would have remained quietly under the bedding in which he had tried to asphyxiate her, in order to spare him. What was her view of her child? she was asked. Nothing but the best. Oh, it wasn’t his fault, bad company had led him astray, it’s always bad company that’s to blame. She didn’t know anything about his girlfriend, he was impressionable, but when he was younger he had been a good boy.

The mother will now be able to visit her son regularly in prison. With trembling fingers she will pack up preserves for him for Christmas and the other holidays, she will scrimp and save for her son, and her old soul will weep for him and hope. And it will be exactly as though her son was not in prison at all, but at university or abroad somewhere, or in some other kind of place that is not easy to return from for professional or some other reasons.

The mother’s day is full of work and painstaking, sometimes dirty labor. But between each thing and the next, the scrubbing of the floorboards and the chopping of the kindling, there will be a brief, secretive folding of her hands. And each time she sits down to peel potatoes, as when the ax struck her, she will cry from pain; but stronger than her woe is her hope, stronger than her pain her faith, and slowly from her love of the child, like young leaves from fertile soil a kind of shy pride will sprout, without cause, she couldn’t say why, not based on qualities, but simply on the fact of this boy’s existence.

And each time she looks at the hatchet or thinks of it, a terrible day will loom up at her out of the past. And for all its terror it’s still weaker in outline and force than the other day, approaching, when her son will come home, upright, healed, and full of regret.

Full of regret? He has nothing to regret. The others are to blame, of course! Any moment the door will open, and he’ll walk in. And even though it’s five years, five lots of three hundred and sixty-five days, it could be any day.

Because the mother doesn’t stick to facts, she denies the solar calendar and the year.

Joseph Roth (1894-1939), was the great elegist of the cosmopolitan, tolerant, and doomed culture that flourished in the dying days of the Austro-Hungarian Empire. Born into a Jewish family in Galicia, on the eastern edge of the empire, he was a prolific political journalist and novelist. On Hitler’s assumption of power, he was obliged to leave Germany, and Roth died in poverty in Paris. A new collection of his work, The Hotel Years, is now out from New Directions.

Michael Hofmann is a poet. His awards for translation include the PEN/Book-of-the-Month Club Prize, the Independent Foreign Fiction Prize, the IMPAC Dublin Literary Award, the Helen and Kurt Wolff Translator’s Prize, and most recently, the American Academy’s Thorton Wilder Prize in Translation.