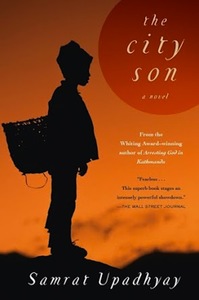 Samrat Upadhyay was shortlisted for the 2015 PEN Open Book Award for The City Son, a portrait of a scorned woman’s lifelong obsession with revenge and her husband’s illegitimate son. The following is an excerpt from the book.

The woman finishes speaking her main bit, pauses, then continues, “I wouldn’t have gone through the trouble of coming here and talking to you had I not been told that you have been kept in the dark about this for years now. How is that possible? I asked myself. How is it that a wife would not know about this big a secret her husband has kept in the city? What kind of wife would not know this? Then I had to see for myself what kind of wife. Now that I have seen you, I know you don’t deserve it. What woman does? You have given your life to your husband, haven’t you, Sulochanaji? And look at the news that I have brought you.

“I’ve seen the boy walk hand in hand with his mother in the market. The boy has immaculately smooth skin and perfectly dimpled cheeks and large, curious eyes. His mother is also exceptionally beautiful. Like an actress in a film, that kind of beauty. A city kind of beauty, sahariya type, the type one finds in magazines. Her face is longish and perfectly shaped. She is petite, loves to wear red. Apsara is her name. Yes, a nymph—that’s what her parents named her. She was a student of his. She came to his flat for tutoring so she could pass the SLC and college exams. Then one day she didn’t return home. Her parents disowned her; her brother came to thrash your husband. But she told everyone her place was with him in that sparse flat in the crumbling house in the busy intersection of the city’s core.

“When I saw her she was dressed in a shimmering red sari as though she had been wedded that very day. The whole street was glowing because of her. People stopped to look at her, then at her son. You know where this was? Right in the Asan market. Soon you’ll know what kind of place Asan is. It’s very close to Bangemudha, where your husband lives, near the large wooden lump studded with coins. People say nailing coins into that wood has a palliative function, but I can’t remember what it cures. Stomachache? Toothache? This is the type of neighborhood where small bands of men with flowers in their hair and cymbals and drums pass through—amazing how only three or four men with their instruments make the sky throb. Not too long after the boy was born, your husband decided that the one-room flat wasn’t big enough, and now they’ve moved to a small house with a separate kitchen and an indoor bathroom. It’s not a bad place. The rent is more expensive than the previous flat, but then your husband is also getting more students to tutor now.

“In the Asan market that day, the boy’s mother was smiling at everyone. The boy was sucking on an ice cream. His beauty made my heart ache, Sulochanaji. I was told that the boy’s mother never wore anything other than bright red—bright red sari, bright red blouse with dhoti—as though it were the festival of Teej all year long. When she was pregnant with the boy, she put a big red tika on her forehead, I was told, and with her rouge and her red sindur smeared on the parting in her hair, she was like a radiant flame. There are these dental shops in Bhedasingh with their horrendous wares—hammers and wrenches and pliers and whatnots—near where your husband lives. When she passed by, those dentists came to the doors of their shops to admire her. They teased her, despite their wives looking from the windows above. ‘Sahuni,’ they said—they called her sahuni, even though she didn’t operate any shops—‘where are you off to so early in the morning, wearing such nice clothes?’

‘Ooo tyahi samma jana lageko. I have to buy a thing or two.’

‘And you are leaving poor Masterji by himself?’

‘He is tutoring his students.’

“The wives of these dentists also called out to her, ‘So, sahuni, when is the big guest coming?’ Apsara wasn’t showing at that time, but somehow the whole neighborhood guessed, correctly, that the boy was on his way. The eyes of these dental wives followed her as she moved on. They wondered about the Masterji’s family back in the village. They invited Apsara up for tea and sweets and plied her with questions. She feigned ignorance when the dental wives asked about the wife and sons in the village.”

Since she has been talking for so long, the messenger’s mouth is dry, and she holds on to the hope that Didi will offer her some water. But Didi has already left the window. It’s twilight. The woman thinks she should be on her way back. Drunks appear on the village pathways after dark; there have been cases of rape. Just as the woman is about to turn away from the house, Didi appears at the door.

•  “You and Your Partner,” from Citizen: An American Lyric by Claudia Rankine
•  “Amina,” from Every Day Is for the Thief by Teju Cole
•  “Our Own Maps,” from An Untamed State by Roxane Gay
•  “The Beiruti Hustle,” from An Unnecessary Woman by Rabih Alameddine