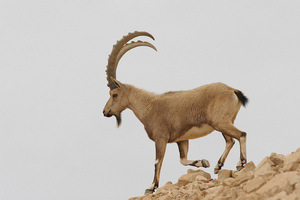 This piece was read by Aminatta Forna at the opening night of the 2015 PEN World Voices Festival. The theme of the night was “the future is now,” and leading writers from around the globe were asked to present their worst- and best-case scenarios for where the world may be in the year 2050.

In the muted light there are some bright objects. The steel bars, the dark glass of the observation room window, here and there the glint of a camera lens, a pool of liquid on the floor of the pen, the gleam of the animal’s eye. His job here is to wait and he is still waiting even though his shift ended fifteen minutes ago. In a back room his replacement sleeps. But Sherrif doesn’t move, instead he waits and he watches, out there in the darkness something is massing into shape. For more than an hour the animal has paced the length of the pen. In that time she has neither eaten nor drunk, although he has made sure the trays of water and vegetables are well-supplied. At each end of the pen she lowers her head and swings it in a semicircle to turn without ever breaking pace; her great belly sways. Only in the recesses of his mind is Sherrif aware of the firmness of the bench, the cool of the air, the weight in his bladder. He has seen this before, this pacing, when he was a boy many years ago, his family kept animals. He knows what is coming.

Ibex. He loves the majesty of the word. And she possesses a majestic beauty, it is in the ellipse of her eye, the rearward drift of her horns. In the next pen is her mate, whose ridged horns arch more than three feet from the crown of his head. They are the first mating pair of their kind in more than sixty-five years. Sherrif wonders if the mate next door senses what is happening. The waiting has gone on for weeks.

The ibex bleats and halts. A camera adjusts focus, a blinking eye. Sherrif straightens. For a few seconds he doesn’t breathe. He wishes there were more light. For her, he wishes the moon and a mountainside. He wonders if, in the part of the shared memory that travels down the generations and is borne on instinct, she has any knowledge that such places exist. No Pyrenean ibex has walked those mountains for decades. If he led her to such a place, would she know how to find her way over the rocks to the water, would she know which trees offered the best shelter, which plants were food and which berries were poison.

The ibex drops to her knees and rolls onto her side. A luminescence. Something glimmers in the half dark. It is beginning. If she succeeds, if she births a kid that lives, then they will try others. Who knows? The Javan tiger, the Zanzibar leopard, a black rhino or white rhino maybe. All those animals driven from the earth, held captive on the ark of extinction, might now return. Sherrif stands up and then sits back down. There’s nothing he can do. The ibex is silent, the gleam of the amniotic sac waxes and wanes. And it grows. It doesn’t take so very long. Maybe just six or seven minutes. The rhythm remains unchanged to the end, and then the ibex is turning on herself, nudging and thrusting with her muzzle. Sherrif places his palms against the glass and presses his forehead into it. Would she be doing this if the kid were not alive? He narrows his eyes. Then he sees, he sees: pale hide, a movement, the glimmer of a newborn’s eye.

Sherrif should sleep, because sleeping or not sleeping will make no difference. Tomorrow he will know if the kid has survived the night, and then it must live the next day and the day after that. And on.

He curls on the hard bench and lies with his eyes open. It was at such times, Sherrif thinks, that he used to pray.