The Hammer of Justice 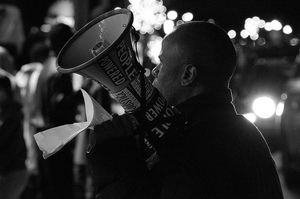 This piece was commissioned for the 2015 World Voices Festival event “Prayer and Meditation,” for which writers and artists were asked to write an original prayer for our time and read it live onstage. Bob Holman was accompanied by musician Salieu Suso on the kora.

“Justice is what love looks like in public.” —Cornel West

Awake & listen! Now hear this!
I was born in Texas, grew up in Kentucky,
High school in Hawaii, never graduated
In Utah, moved to New York, never left
In California, my children’s names are Dakota
(For real) North, South, Carolina Louisiana Alabama
Alaska. I was trained to kill by the Poets, & ordered
To steal people’s languages & last names till I became
Citizen4. They call me Garner Brown & it’s not Global
Warming that makes me say #ICan’tBreathe

It’s the way the fourteenth line
Of the sonnet closes in, death
By one’s own hand. To State the Union
Is to make the Poem that Heals.

Papa Susso and I were sitting in a coffee shop
Drinking some of Papa’s famous Chinese tea.
Justice was with us, having a hard time of it
Drinking with her blindfold on.
You’d think after all this time, Papa was saying,
You’d be used to it—sugar’s at four o’clock.
It’s not easy, said Justice, treating people equally,
Dripping tea down her long white robes.

Justice was in a funk. She had an idea
But the idea was just an idea.
It was clear that the scales were weighted to
the males
It was clear that the white people had the bulk
of dough
She started in on Ferguson, people searching
For an answer in a system where you always lose
Then she talked about Selma’s Bloody Sunday.
Papa, she said, I think I know what it is—
What is it? asked Papa. It’s Reparations, said she.

O Justice! Bring down your Hammer!
Break the system of inequality
Use your scales to derail hypocrisy
Give the country back the currency of equity

Yes, we love the Constitution
But the white men who wrote it owned slaves
Yes, we Declare our Independence
But women had to fight for the right to vote
So let’s rewind the time machine of History
Start with all humans getting Human Rights

Reparations through education
Payback time in the USA
Take your blindfold off, Justice
It’s time for you to see
Reparations for the generations,
Generations—descendants of slaves
Because the slaves built the country.
But they never got paid.

O Justice! Bring down your Hammer
Smash the system built on slavery
Let your thunder bring wonder
Let our country be the place it wants to be

And here in this place of poets
Where language needs to sing and mean
People take out your hammers
Hammer out Justice
Hammer out Freedom
Papa hammer on your kora. Sing, Papa, sing!