The Feast of Weiner: On Translating Richard Weiner 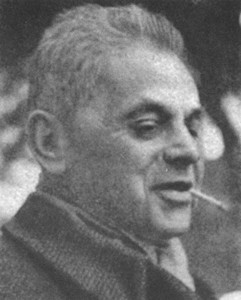 Benjamin Paloff is the recipient of a 2014 PEN/Heim Translation Fund Grant for his translation of The Game for Real, by Richard Weiner. Read an excerpt of the translation here.

Jindřich Chalupecký, among Richard Weiner’s earliest and most enthusiastic readers, entitled one of his later studies of the Czech Modernist simply Nesrozumitelný Weiner: “incomprehensible Weiner.” The title is more than a little ironic. Better than most, Chalupecký knew that Weiner could be understood, as well as that people would turn to critics and theorists like himself for help along the way. Still, there is an honesty in this description that strikes me as refreshing, given that the dominant rhetoric of Anglo-American scholarship acknowledges the kernel of an author’s inscrutability, if at all, only after waves of explanation, whereas Chalupecký begins with inscrutability and works his way toward insight. Imagine a world where academic monographs bore titles like What Is Up with That?: The Novels of X, or I Have No Idea: The Poetry of Y, or simply WTF?! At the very least, it would strike a good blow against public anti-intellectualism, since anyone who claims not to be a bit bewildered by writers like Richard Weiner is inherently untrustworthy.

My desire to have a better grasp of Weiner is the second reason I am motivated to translate him; I’ll get to the main reason in a moment. Weiner has been a focus of my scholarly work for about a decade, during which time I have frequently been required to translate discrete passages, a sort of groundwork for the interpretive process. But that’s not the same as embracing an entire book, let alone one as knotty as The Game for Real. Besides the obvious (and admittedly daunting) difference of scale, there’s the fact that one cannot hope to understand the functions of an organ without first mapping out its connections and relations to all the other organs. Translation provides a gross anatomy of the text.

It also proceeds through a purely poetic activity, and this, for me, is the principal attraction of translation in general, and of translating Weiner in particular. When I translate, many of the compositional dilemmas that might vex me in another area of my writing life just don’t apply. Characterization, action, image, structure—all of these decisions have already been made before I even open the book. All I have to do is get the right words in the right order. And while Weiner makes even this task as difficult as it can be, its attendant pleasures grow in direct proportion with its challenges and frustrations.

I like a good story as much as the next fella. Weiner does, too. The Game for Real gives us thematically intertwined detective stories whose basic setup calls to mind The Big Clock, Kenneth Fearing’s 1946 noir masterpiece about a man racing against time to find a stranger who happens to be himself. But what really keeps me turning the pages is rich language, language like Häagen-Dazs strawberry ice cream: dense as it is, each spoonful only makes me want the next. That these calories, delectable to the point of being dangerous, are not empty—that Weiner has given me so much to chew that, ten years on, I’m still chewing—makes the leap from reading Weiner to writing him all the more natural.

This piece is part of PEN’s 2014 translation series, which features essays and excerpts from the recipients of this year’s PEN/Heim Translation Fund Grants.