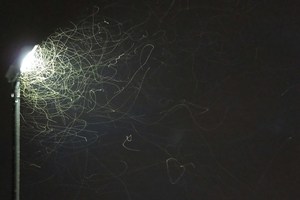 This week in the PEN Poetry Series, guest editor Robert Fernandez features a poem by Cal Bedient. About Bedient’s work, Fernandez writes: “In Cal Bedient’s ‘The Era,’ anaphora, fearless imaginative leaps, and bounding, self-propelled sound and rhyme set us in a dizzying terrain. We feel the snaking of the color white as it is employed in an interrogation of the current era, a continual shedding taking place, new skin revealed as we are ‘dressed white on white in the crisis of surveillance’ and as ‘the whole white colony is moulting shares.’ ‘The Era’ passes through surveillance and finance as well as the body and sickness (‘white cysts swell’), power and the Sublime (‘the white tiger drinking from the star stream’), and panic and celebration (‘the log jams of scrolled / up wedding dresses’). Bedient’s horizon of examination is vast and his speed is breakneck. His imagination is supple enough to reflect the era’s deranged currents in a precise singing that knows the tragic, liberatory potential in hearing ‘tall claps of impermanence’ and that has an eye toward ‘astonishing change.’”

The white crisis, the white house
blood type, white essences,
millions of white accidents,
those on the way it goes white from here,
white lighthouse stinging the sea,
all angels marvelous unsavory
whose white cysts swell
in the shadows of the white placentas,
pages of white moths, and how now
achieve, in all the white accommodation
(the white tiger drinking from the star stream)
the definitive uprooting of the white negative
(not a whitewash, no, not a whiteout, no),
as one snatches away a white veil—
suddenly she had to leave, stopped short
in the midst of millions of white arches,
had to run away, stopped cold by a crowd
of white hellos, they swoop so dizzyingly,
how long can this go on,
but had we been so very kind
so very clever as to sift the white sugar
glass from the rain, taken the hands
of the Ruler Gods and strolled
like a freshet of air into this hour,
smelled the green, the astonishing change,
peavied the log jams of scrolled
up wedding dresses, mothballed
they are, tied with cold memories,
stunned one by one the white registers,
climbed the white cliffs in our millions of moths,
could we have helped her,
how long can this go on,
could she be deeply affected again,
astonishingly changed,
freed by tall claps of impermanence,
sprigged with whoozit atoms,
it is our only money,
the Rulers making paper airplanes
of their countless white categories,
what we think of as zones when we come near to them,
old white causes, type white angelism—
but see where she halts benumbed
in the white halls of hellos,
dressed white on white in the crisis of surveillance,
who can stop this,
the whole white colony is moulting shares,
drones cloud the sky overhead
dead-on to bomb the infestations
crossing the lawns without suit cases