The Day We Fight Back Against Mass Surveillance 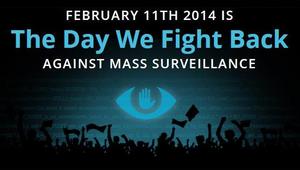 Today, PEN American Center joins Access, Demand Progress, the Electronic Frontier Foundation, Fight for the Future, Free Press, BoingBoing, Reddit, Mozilla, ThoughtWorks, and others for “The Day We Fight Back,” a concentrated campaign to press lawmakers for comprehensive changes to National Security Agency surveillance in the United States and around the world.

PEN has challenged mass surveillance since the enactment of the PATRIOT ACT, even fighting the government all the way to the Surpreme Court in 2013. As an organization that promotes literature and the free flow of ideas, PEN is deeply concerned that our government is monitoring and vacuuming up private conversations among writers in the midst of their creative processes. Our fall 2013 report, Chilling Effects, confirmed our suspicions, offering the first evidence that government surveillance is causing American writers to self-censor and curtail their research.

President Obama’s newest round of reforms, announced in January 214, do not go far enough to fix a deeply flawed system. Every day the NSA’s mass surveillance programs remain in place we lose articles, essays, books, and critical reflection on literature from writers who have been intimidated into silence. The President’s Review Panel, the Privacy and Liberties Oversight Board, and other government-appointed bodies have called for an end for NSA surveillance programs, yet little has changed. The three sources of legal authority that enable bulk government surveillance largely remain in place: section 215 of the USA Patriot Act, section 702 of the FISA Act, and Executive Order 12,333.

Now is the time to speak up. Tell the world: surveillance is hurting our creativity and our economy, and we still have no proof that it is keeping Americans safer.  Help PEN save our stories before the NSA vacuums them up, too.

HOW YOU CAN HELP

Visit www.TheDayWeFightBack.org to:
• Watch a video explaining the origins and significance of The Day We Fight Back.
• Identify and contact your congressional representatives to demand an end to bulk surveillance.
• Use social media tools to share your participation and encourage friends and followers to get involved.