The Blood of Love 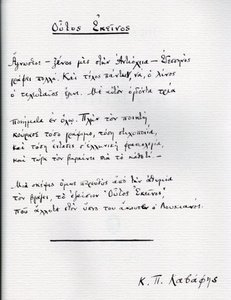 Two of the early 20th century’s greatest artists begin with fundamentally the same problem—what are we to make of lost time? If memory is all that can be kept of the past, how might it be kept alive? And if there is no life we can see beyond this one, can the art we make of memory become our survival, the continuing trace of our presence in the world?

C.P. Cavafy and Marcel Proust stand at the beginning of the century in which we understood that time and space were relative, and new modes of travel and communication blurred our sense of the fixity of either. These writers could not be more opposite in their methods. Proust is the ultimate maximalist, his vast novel a record of a consciousness that seems to hover and dart like a dragonfly, attentive to every nuance; he wants to make a book that feels as huge and various as experience itself.

But Cavafy is dedicated to austerity; his brief, often aching poems are sometimes just a handful of lines, and never more than two pages. His poems refuse figurative speech; almost nothing is “like” anything else. Many a line goes unadorned by adjectives or adverbs, these bare narrations and assertions seemingly all this poet will allow himself. And yet a reader can hardly miss the tremendous pressure the poet has placed on each of these short lyrics, and the way this almost elemental, dry, hard-won language bears that weight.

Here is Cavafy’s shortest poem. It seems to me to describe the whole of his poetic project—and it seems an equally apt distillation of Proust’s grand novel as well. Ready for À la recherche du temps perdu in five lines? Here it is, in Edmund Keeley and Phillip Sherrard’s translation:

IN THE SAME SPACE

The setting of houses, cafes, the neighborhood
That I’ve seen and walked through years on end:

I created you while I was happy, while I was sad,
With so many incidents, so many details.

And for me, the whole of you has been transformed into feeling.

This is the work of these two writers, to bring the world so completely into the self that it is both preserved and recast, held in memory and in art, given back to the reader in a form that makes us feel—miraculous!—that our own lives are reflected there.

It is not coincidental that both writers were men who loved other men.

He said that he’d hit a wall, or that he’d fallen.
But probably there was another reason
For the wounded, bandaged shoulder.

With a rather forceful motion
So he could take down from a shelf some
Photographs that he wanted to see close up,
The bandage came undone and a little blood flowed.

I bound the shoulder up again, and over the binding
I lingered somewhat; for he wasn’t in pain,
And I liked looking at the blood. Matter
Of my love, is what that blood was.

When he left I found, in front of the chair,
A bloodied scrap of cloth, part of the bandage,
A scrap that looked like it should go straight into the trash;
And which I took upon my lips,
And which I kept for a long while—
The blood of love upon my lips.

That scrap of bandage is a love-token and a piece of trash; the man who brings it to his lips is both devoted and desparate. The poem ends not with “the blood of my love” but “the blood of love upon my lips.” What can be kept of love, souvenir, detritus, precious relic? This is the earliest text I know of gay shame, but it is also any lover’s debasement; who hasn’t known that moment of abjection when we’d do anything just to touch some element of the beloved again? It is an extraordinarily tense, discomfiting poem, an engine of shame and joy and abasement – not more beautiful than desolate, not more painful than tender.

Even casual readers of Cavafy know that his poems do not occupy just the personal past, but also look backward toward a whole Hellenist history; he seems as at home in the Alexandria of the first century as in that same city 1800 years later. He writes about the citizens of distant times as though he were gossiping about friends, and speaks with confident ease to generals and conquerors and kings. If a poem can encapsulate a moment thirty years old, and make it available now, why not a moment a thousand years old? There is a sense running through Cavafy’s work that we are less individuals than citizens of culture, expressions of the cities that shape us. The prohibitions that rankle the 20th century lover are equally the business of the 2nd century one; we still blame barbarians for our problems, still imagine the goal at the end of a journey to Ithaka to be the point of that journey. These continuities mark us as members of a tribe.

When we read a Cavafy poem, we understand that the poet is speaking to his particular situation, the struggles and pleasures of a life. But almost at the same moment comes the sense that these poems are ours. How a poet does this—making the least moment a common human one—is a mystery that resists illumination. Antony receives these unforgettable instructions, at the moment of his abandonment:

Listen—your final delectation—to the voices,
To the exquisite music of that strange procession,
And say goodbye to her, to the Alexandria you are losing.

We will, every of us, lose the cities we love; the passing music, the unrepeatable processions we have been a part of, those will go without us. But how lucky we are, to have words like these, with their firm cadences, their nobility, their wounded and radiant honesty—words like these to go with us.