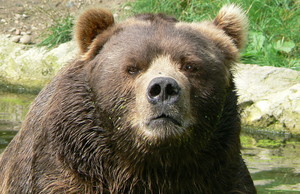 Below constellations of pool balls clattering
geometry’s grace. Below pinball machines
ringing like a telephone full of congratulations
& the street-car stutter of a movie projector:
Jack Dempsey clubbing Luis Firpo or being
clubbed by Gene Tunney, depending on the reel
& the day. Below the heavy bag that, with each
hit, pulls down parts of the ceiling like confetti
at the tail end of a parade. Behind the man
with the sagging eye who makes change by touch
& past the turnstile that sticks sometimes,
so he has to push himself up, dust sunflower
shells from his blue trousers & exit his smudged
booth to collect tickets. After Congo the Wild
Man’s caterwaul & Sealo the Seal-Finned Boy’s
slick handclaps as tenacious as fresh meat
in a butcher’s palm, out comes Jack Johnson.
Dog-eared blue suit, blue beret. Red wine sipped
through a straw: What would you like to know?

Back then, they’d chain a bear
in the middle of the bear garden

him too much. A bear will always
make short work of a dog. Shakespeare

said Sackerson did it more than twenty
times to dogs & wildcats alike.

& since most creatures are naturally
afraid of bears, there wouldn’t

always be much of a show in the bear
garden. So the handlers sometimes put

the bear’s eyes out or took his teeth
to make the fight more sporting.

I believe you need eyes
more than you need teeth in a fight,

but losing either makes a bear a little
less mean. Once baiting was against

the law, some smart somebody
figured coloreds would fight just

as hard if hungry enough. So they
rounded up the skinniest of us,

had us strip to trousers, then blindfolded
us before the fight. They turned us

before pushing us between the ropes.
When the bell rang, it seemed

like I got hit from eight directions.
I didn’t know where those punches

came from, but I swung so hard
my shoulder hasn’t been right since

because the man said only the last
darky on his feet gets a meal.

People always talking about if
& suppose like those words are worth
more than money, more than the crease
a silk stocking makes on a woman’s

thigh. More than the grumble of a Thomas
Flyer engine. So I take the side of my
pleasures. Two small words, if & suppose,
& nobody can explain them. We get

in this world what we’re going to get.
After all, one man can roll out of bed
& be killed, while another man falls
from a scaffold & lives. A man can get

a bullet in the brain & keep his life
while some other poor sap dies
from a shot in the leg. It’s all luck
& perspective: pleasure is both to me.

I’ve forgotten some prizefights,
the names of men I beat more

than they beat me, but how can
I forget Divine Intervention

with a scar dividing my thigh
like Wabash splits Chicago?

like a lazy plum. I layed back
in that stall bleeding & hollering

in the dirty hay, that horse looking
over his shoulder at me like

it was my fault & the flies
& the flies’ humming stuttering

like telegraph type until Jim
found me. I couldn’t tend horses

after that. The scar is purple now.
Jagged as a pant’s hem.

Even though the bone healed
all right, I rub the scar for luck.

Most times, I forget I’m rubbing
until Etta reminds me.

The first time I heard the aria,
it was like sun up after the Great Storm.

The man’s voice rising, then rising more
as if the want of it all wouldn’t allow

him another breath. Like road work
when you’ve punched yourself out.

rooms. Like finding Etta on the floor,
a halo of blood getting bigger

by the minute. Like the nurses not nursing,
but crying & pointing at the gun,

a libretto on the heels of her last breath:
You did this, Papa. You did this.