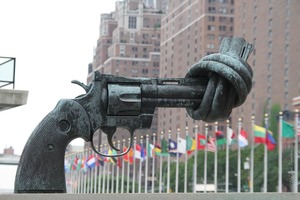 This week in the PEN Poetry Series, PEN America features two poems from a sequence by Lo Kwa Mei-en.

The conquerers came and wrote the conquered into being
guilt-making, but pretty good in retro, plus, gosh, pretty to boot.
Um—so, “like” but “not”: a citizen has a soul in his face of
fair; it’s why they don’t all look the same. Toddlers fumble thru
veni / vidi / verify but can recite my name / number / allegiance
except on multi-colonial awareness day, a false password we live.
Without anger, they beg, poems work—don’t you want to arrive? God,
do I? When a conqueror sleeps in the collar of his hand, how
xenophobic pencils might shudder on a page of the domestic:
come be historic and sample a vowel: then write an index
yes is said to. Amen. But come the future. But say we climb
back on the boat. Say we pack the hull with work with angry
zephyrs—to, say it, their hell—and over it heave the extra
anchor, aim it to a future minus a canon the color of quartz—

The child in bloom may see the world, refracting
galaxy drowsy with seed, the opposite of a hole. That

stasis snuffs out like a life is still life. Seed in the plush

hull up to a sharp, tipping breath. The child is
running for the gold spaces of any given Sunday.

A police officer with a gun drawn is nothing like an enoki.

I know he is an unspeakable growth in the forest.

The child is a child. His mother is a mother.

Questions of intent are like aspartame to a honeybee raj
jerking on the hive floor: the world of a draq
pinned to the world by a world hoarding its own luck.

Kings in the capitol lift capital to the light like massive infants.

No child can stop

old men in their foyer and make a crown roll
loose alphabets past the rotting claw that will not let a child go.

No commander will ask a pistol to bend
and obey a demand for late bloom, new roots, and living loam.

Man’s world must be just a wound hidden by a uniform,
loyal like a pauper dragon.