The Actions of Brave Men 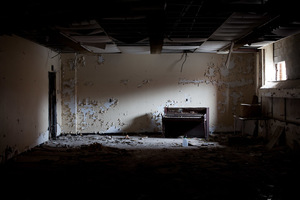 This week in the Guernica/PEN Flash Series, we feature a piece by Matt Bell. Subscribe to the series and get new flash delivered to your inbox twice a month—no spam or news, just stories.

The city closed another dozen schools and after the students were gone the scrappers came. The schools left the security systems intact—cameras, passive infrared monitors—but eventually someone cut the power, hauled away the transformer box. The battery backup kept the security live for eight hours but turning the power back on would take days of work, twenty thousand dollars the city didn’t have. When the security died the most aggressive scrappers came first, headed straight for the copper: The concrete in every bathroom shattered with hammers, the wire mesh inside bent with pry bars or else yanked free by grabbing hold and leaning back, letting body weight pull the mesh free of its fastenings. Then turning a pipe cutter around whatever they could see. Then down to the basement for the boiler, its own set of copper piping. Dismantling the plumbing could set off the sprinkler system. Then water cascading on chalkboards, bookshelves, hardwood floors, destroying whatever the scrappers left.

The other scrappers didn’t wait for night. The scrapyards closed at five and so you took the five o’clock price if you didn’t have somewhere to stash what you took. Or else the scrapping started at three or four or five in the morning, so it could be done by the time the scrapyards opened again at eight.

Kelly refused to be the first thief. He worked other sites during the day, dropped his scrap, hit the bars. By midnight he was back in the truck, driving a loop of closed schools, looking for broken glass, a pryable door. The city boarded windows, put up chain-link fences. But boards didn’t stop anyone. But scrappers would take the fences too, cut the posts off at the dirt.

Inside an elementary school Kelly dragged a makeshift sled of locker doors down the front stairs, busting the concrete with the bounce of the weight. Outside the night air was cool, the sound of the season’s last crickets louder than anything else, the school surrounded by pasture, grass overtaking the long absence of nearby houses. Kelly had parked his truck within the school’s courtyard, the most convenient cover, but if anyone else came while he was inside, they might take the scrap out of the truck instead of heading in. They might take the truck.

The men came for him in the darkest hour of night. A gloom of moonlight fell through the tall windows of the second-floor gymnasium, where Kelly piled coils of insulated wire pulled from the circuit breaker, the conduits within. He thought he’d been listening but by the time he heard their footsteps coming they were in the vast room with him, rushing out of the shadowed hallways. He turned his headlamp fast, caught white eyes and white teeth in its light as the first shape struck him, knocked him to the ground. Fists bruised his face and forearms and when he was almost stilled the man’s hungry hands pushed into Kelly’s pockets, looking for his wallet, keys, phone. Kelly brought up a knee, cracked some breathing room from the man’s ribs, rolled him over and off.

The lamp slipped from Kelly’s forehead, its beam falling uselessly diffuse across the gym floor. Before he had his feet the other was coming fast and Kelly reached out blindly for the man’s head, catching the hood of his sweatshirt. He spun, dropped to his knees, turned the fabric around the man’s throat, bunched and twisted, and the man cried out, kicked, and tried to pull out of his shirt. Kelly lifted the man to his feet, tightening his grip, reeling him in. Robbers in the night. He wouldn’t have to hurt them much more. These weren’t the actions of brave men. Kelly was a thief too but he told himself he only stole what no one wanted. What he could tell himself hurt no one. A hierarchy of opportunity and morality.

The first man stood too, a slimness of air between him and Kelly and the second man. The darkness massed in the high room, everything sure reduced to touch and smell and sound, to echo, to the fear expanding inside everything you couldn’t sense.

I’ll let him go, said Kelly. But if you come back at me I don’t know what I’ll do.

Neither man spoke but the man caught in Kelly’s arms stopped his struggling. Kelly released the man, watched him flee in the same direction as the other. He crouched into the silence of the room, found his tools. First the hammer, then the headlamp. He moved the beam of light across the gymnasium but the men with white eyes and white teeth stayed gone. He couldn’t catch his breath and bruises lifted from his skin but otherwise he could pretend the men had never existed. Once he had been stronger than he was but had he ever heard his heart thudding so loudly. He shut off the lamp, sat down on the floor among the wiring he’d pulled from the wall. He waited, listened. He moved to the windows, watched the courtyard, saw his truck untouched. Still no sound from below but there were exits without doors, windows without glass. You could walk through the broken world like a wraith. As Kelly waited the night spoke to him, crickets again, wind and far-off traffic and what he swore were voices, speaking somewhere at the limits of sense. At such great distances it was impossible to understand the words the voices said, what they intended, whether these were the voices of bad men, whether the invisible evil all men carried was something they were born into or something they chose.