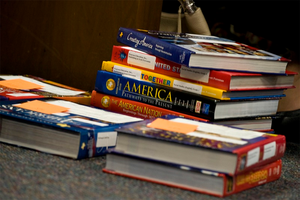 The following text has been adapted from a July 5, 2015, Washington Post article by Emma Brown and a July 7, 2015, Los Angeles Times article by Michael Schaub. It is reprinted here with permission from PEN Center USA.

This fall, five million Texas public school students will begin using new social studies textbooks. The content of these textbooks is based on new state academic standards, adopted in 2010 to correct what the Texas State Board of Education, a 15-member elected panel dominated by Republicans, calls a liberal slant. According to a July 5, 2015 report in the Washington Post, these textbooks barely address racial segregation—nor do they mention Jim Crow laws throughout American history, or the existence of the Ku Klux Klan.

In the early twentieth century, the Ku Klux Klan was a major presence in Texas—in the 1920s, the Dallas chapter had as many as 13,000 members. Today, there are at least five active Klan chapters in Texas, according to the Southern Poverty Law Center.

In addition, the new state academic standards seek to heavily downplay the role that slavery played in sparking the Civil War, instead emphasizing “sectionalism, states’ rights and slavery” as the primary factors that caused the conflict. State Board of Education member Patricia Hardy is quoted in the Post as saying that slavery was a “side issue to the Civil War,” when the board adopted the standards in 2010. She also infamously claimed that “there would be those who would say the reason for the Civil War was over slavery. No. It was over states’ rights.”

Sociologist James W. Loewen, interviewed in the Post, identifies many errors and omissions that de-emphasize the role of slavery in the Civil War, primarily the “textbooks’ failure to quote from key primary sources: the Southern states’ declarations of secession, which made clear that they were leaving the union to protect white citizens’ right to own slaves.”

A 2010 editorial in the Los Angeles Times suggested that Texas “consider including each of the Confederate states’ secession statements” in the social studies curriculum, noting that Texas’ statement read, in part, “[Texas] was received as a commonwealth holding, maintaining and protecting the institution known as negro slavery—the servitude of the African to the white race within her limits — a relation that had existed from the first settlement of her wilderness by the white race, and which her people intended should exist in all future time.”

PEN Center USA is calling for the social studies textbooks planned for use in Texas public schools this year to be replaced with classroom materials that are based on scholarly consensus, and offer an accurate portrayal of American history, free of political agendas.

Please SHARE this story on social media using the hashtag #Texas, in an effort to increase public awareness.

Please SIGN the petition on PEN Center USA’s page appealing to the Texas State Board of Education: