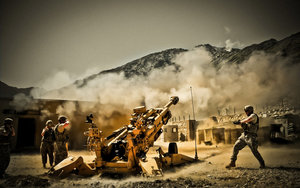 At the table all nine of us are smiling and laughing, still jittery with nervous excitement. I’m sitting next to Voorstadt, our number one guy, and Jewett, who’s on the ammo team with me and Bolander. Voorstadt’s got a big plate of ravioli and Pop-Tarts, and before digging in, he looks down the table and says, “It’s about time we killed someone.”

Sergeant Deetz laughs. Even I chuckle a little. We’ve been in Iraq two months, one of the few artillery units actually doing artillery, except so far we’ve only shot illumination missions. Some of the other guns in the battery had shot bad guys, but not us. Not until today. Today, the whole damn battery fired.

Jewett, who’s been pretty quiet, asks, “How many insurgents do you think we killed?”

“Why you think we needed the whole damn battery?” says Deetz, grunting out the words.

“We didn’t,” says Bolander. “Each gun only fired two rounds. I figure they just wanted us all to have gun time on an actual target. Besides, even one round of ICM would be enough to take out a platoon in open desert. No way we needed the whole battery. But it was fun.”

Deetz shakes his head slowly, his heavy shoulders hunched over the table. “Platoon-sized element,” he says again. “That’s what it was. And two rounds a gun was what we needed to take it out.”

“But,” says Jewett in a small voice, “I didn’t mean the whole battery. I meant, our gun. How many did our gun, just our gun, kill?”

“How am I supposed to know?” says Deetz.

“Platoon-sized is like, forty,” I say. “Figure, six guns, so divide and you got, six, I don’t know, six point six people per gun.”

Sanchez takes out a notebook and starts doing the math. “Divide it by nine Marines on the gun, and you, personally, you’ve killed zero point seven something people today. That’s like, a torso and a head. Or maybe a torso and a leg.”

“We definitely got more,” says Deetz. “We’re the best shots in the battery.”

Bolander snorts. “We’re just firing on the quadrant and deflection the FDC gives us, Sergeant. I mean . . .”

“We’re better shots,” says Deetz. “Put a round down a rabbit hole at eighteen miles.”

“We were on target.”

“Okay, Sergeant, we were on target. But the other guns, their rounds could have hit first. Maybe everybody was already dead.”

I can see that, the shrapnel thudding into shattered corpses, the force of it jerking the limbs this way and that.

“Look,” says Bolander, “even if their rounds hit first, it doesn’t mean everybody was dead. Maybe some insurgent had shrapnel in his chest, right, and he’s like—” Bolander sticks his tongue out and clutches his chest dramatically. “Then our round comes down, boom, blows his fucking head off. He was dying already, but we’d have finished him off.”

“Yeah, sure,” says Jewett, “I guess. But I don’t feel like I killed anybody. I think I’d know if I killed somebody.”

“Naw,” says Deetz, “you wouldn’t know. Not until you’d seen the bodies.” He shrugs. “It’s better this way.”

“Doesn’t it feel weird to you,” says Jewett, “after our first real mission, to just be eating lunch?”

Deetz scowls at him, then takes a big bite of his Salisbury steak and grins. “Gotta eat,” he says with his mouth full of food.

“Why?” Voorstadt says to Jewett. “We just killed some bad guys.”

“I don’t think I killed anybody,” says Jewett.

“Technically, I’m the one that pulled the lanyard,” says Voorstadt. “I fired the thing. You just loaded.”

“Yeah, but you didn’t,” says Voorstadt.

“If we used a howitzer to kill somebody back in the States,” I say, “I wonder what crime they’d charge us with.”

“Yeah, murder, sure,” I say, “but for each of us? In what degree? I mean, me and Bolander and Jewett loaded, right? If I loaded an M16 and handed it to Voorstadt and he shot somebody, I wouldn’t say I’d killed anyone.”

“And I loaded, but we got the ammo from the ASP,” I say. “Shouldn’t they be responsible, too, the ASP Marines?”

“Why not the factory workers who made the ammo?” says Deetz. “Or the taxpayers who paid for it? You know why not? Because that’s retarded.”

Jewett gives a little shrug. “I don’t know,” he says. “I still don’t feel like I killed anybody.”