To receive this series straight to your inbox, sign up below.

Introduction To Volume 7.0:
The Literary Issue

As an organization that champions the critical role of literature in bearing witness, we are sensitive to the pandemic’s impact on authors committed to challenging and exposing the carceral state. Temperature Check Volume 7, The Literary Issue, temporarily shapeshifts in format to support those writers with recent releases that contribute to critical public dialogue about mass incarceration, forefronting ideas and concepts that will remain urgent after the pandemic subsides.

In this special issue, you’ll find a series of book reviews engaged by members of our Prison Writing Committee, an interview with Dr. Nicole Fleetwood, whose recent publication Marking Time: Art in the Age of Mass Incarceration is an astonishingly fresh look at creativity behind the walls, and a podcast interview with PEN America Prison Writing Contest winner George Wilkerson, who called in from death row to discuss Crimson Letters: Voices from Death Row, a new collection he co-edited with a roster of individuals brought together by journalist Tessie Castillo.

And though the landscape has required exceptional creativity in pivoting to Zoom releases (for those able to access them), the pandemic’s impact is not all bad news. Even in the face of canceled author tours, book sales are up as people search for homebound activities: The Los Angeles Times reported that the American Book Association’s “online bookselling sites clocked a 250% increase in traffic; Bookshop.org, which just launched in February and partners with indies and media, reported a 400% increase in sales, which put $100,000 back into bookstores’ bank accounts.”

We hope to entice readers to purchase a few of these featured titles and engage with the nuanced, layered, and sometimes difficult concepts presented in the texts (see here for a list of Black-owned bookstores to support). A special thanks to the vast community that rallied around this issue. How exciting to see it come together.

And if you missed it, you can now listen to “A STRONGER DESIRE TO LIVE” via podcast or on YouTube, where the event is supplemented by visual arts. This emotionally stirring 90-minute podcast performance draws together a roster of powerful artists standing in to voice a tremendous series of prose, poetry, and drama works penned by award-winning incarcerated writers. Tied together with original music by Kenyatta Hughes, an artist and activist who has shared his music from Sing Sing to Carnegie Hall, the program is a moving tribute to the immense—and often hidden—talent behind the walls.

Art in the Age of Mass Incarceration: A Dialogue with Nicole R. Fleetwood 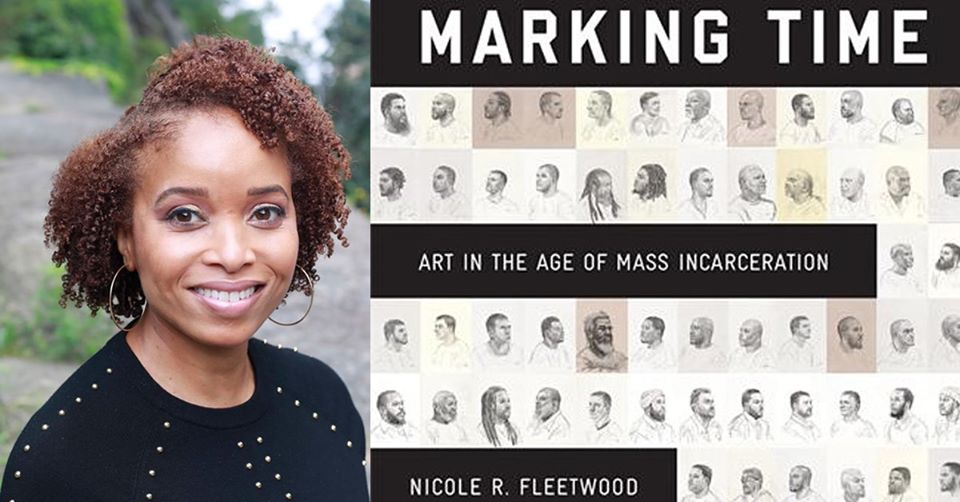 Though Marking Time: Art in the Age of Mass Incarceration reveals how ordinary objects in prison are leveraged to create extraordinary visuals of the imagination, the book accomplishes so much more. PEN America’s Prison and Justice Writing Program Director shares in a written dialogue with author Nicole R. Fleetwood about her most recent release—an innovative book that we suspect will stake its claim among titles such as The New Jim Crow as a go-to in the field for years to come. 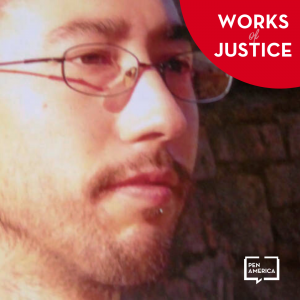 For authors whose books were slated to publish during a pandemic, like Tessie Castillo’s, that usual release process has been turned on its head. Castillo is a journalist and the author of Crimson Letters: Voices from Death Row, published by Black Rose on March 12, 2020, and co-authored by Michael J. Braxton, Lyle May, Terry Robinson, and George Wilkerson—four men on death row in North Carolina. Castillo met her coauthors while conducting a journaling class. The project is a meditation on her unlikely friendship with the men—after all, classes conducted by outsiders on death row are indeed rare—and features 30 essays in the men’s own words about their experiences.

We bid our outgoing Prison and Justice Intern Kate Cammell farewell with her final Works of Justice interview: a powerful conversation with Crimson Letters editor George Wilkerson about the power of storytelling and how he finds hope in his daily circumstance. Wilkerson is a PEN America Award winner for his 2018 memoir “Limp Gray Fur.” His writing has been published in The Marshall Project, Compassion, and The Upper Room.

Listen to the half hour-long conversation on our Works of Justice podcast:

Book Reviews from the Prison and Justice Writing Community

Admitting The Darkness: A review of Louise K. Waakaa’igan’s This Is Where (Willow Books) by Stella Brice

“Waakaa’igan is a serious poet in a serious place—both psychic and physical. She admits the darkness. She acknowledges the bones scattered on the floor. She does not turn away from the wounding, from the ‘corruptive, shy bruises invading my privacy.’”

“Levine and Meiners strategically focus their energy on the sex offender registry and civil confinement, two especially egregious ways in which the carceral response to sexual violence has served to radically extend the bounds of the prison.”

“Charged advocates for a new kind of district attorney as the key to reforming the system, one who is intent on true justice over winning.”

“By combining research with detailed anecdotes from her years-long career as a criminal lawyer, Smith dissects the concept of guiltiness and ultimately exposes the false dichotomy of innocence and guilt for what it is: a structure established to position ‘criminals’ as an exotic other.”

“In Caged, the playwrights of the New Jersey Prison Theater Cooperative stage the violence of injustice on a profoundly human scale. . . The play points to the enormous political potential of finding a communal voice, and the artistic possibilities of intense and thoughtful collaboration.”

A Crucial Critique of State Power: A review of Classic Writings in Anarchist Criminology: A Historical Dismantling of Punishment and Domination by Anthony J. Nocella II, Mark Seis, and Jeff Shantz (AK Press) by A.W. Strouse

“I would ordinarily think of incarceration strictly in terms of the criminal justice system, and the formal, legal process of disciplining convicted offenders of the law. But reading Classic Writings in Anarchist Criminology, especially during the current pandemic crisis, has helped me to rethink that assumption.”

A Modern Feminist Reckoning: A review of The Feminist War on Crime: The Unexpected Role of Women’s Liberation in Mass Incarceration (University of California Press) by Sarah McEachern

“Gruber asserts that feminist activism happens in a vacuum of patriarchy, and in order to find traction in a societal system set against women, combatting violence often resorts to stereotypes of perfect victims and idealized womanhood. Instead, Gruber advocates for neofeminism—a more nuanced, intersectional approach.”