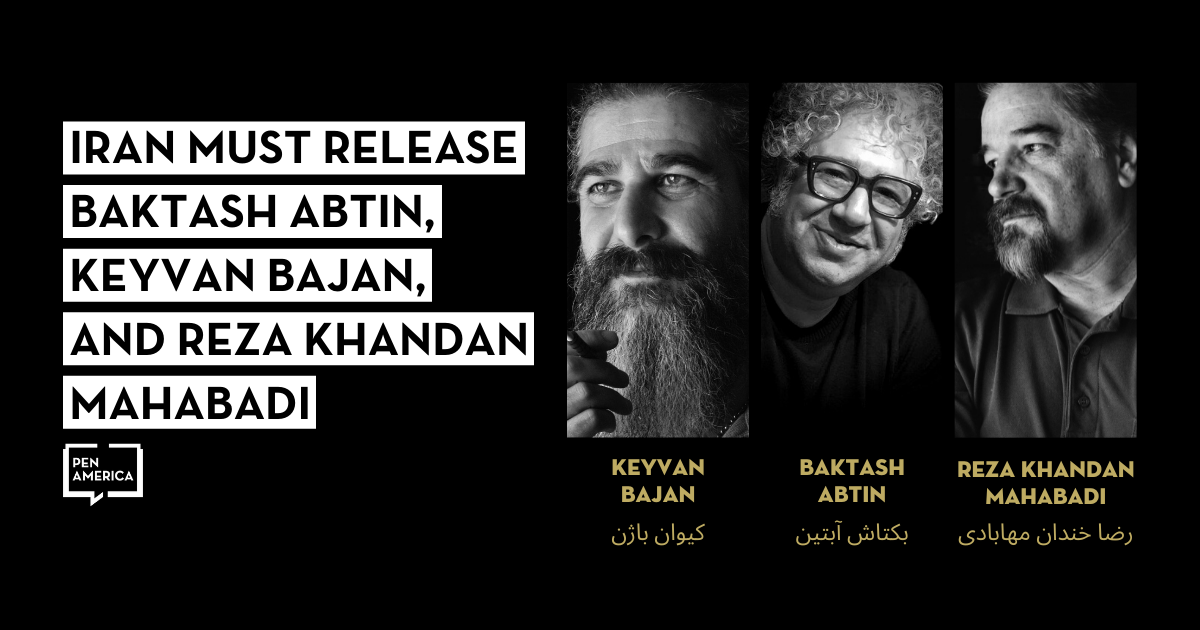 This year, PEN America is honoring imprisoned Iranian writers Baktash Abtin, Keyvan Bajan, and Reza Khandan Mahabadi with the 2021 PEN/Barbey Freedom to Write Award. All three writers have been imprisoned by the Iranian authorities for their writing, their defense of free expression, and their peaceful opposition to state censorship. In May 2019, they were each sentenced to six years in prison on spurious national security and propaganda charges. In September 2020, after an appeals process, they were summoned to begin their collective 15-and-a-half-year sentence at Evin Prison, even as the COVID-19 pandemic was ravaging Iranian prisons. Join PEN America in calling for their release now.

To the President of the Islamic Republic of Iran Ebrahim Raisi

We, the undersigned writers, journalists, creative artists, and supporters of PEN America, are writing to urge the release of three Iranian writers and recipients of the 2021 PEN/Barbey Freedom to Write Award, Baktash Abtin, Keyvan Bajan, and Reza Khandan Mahabadi.

Abtin, Bajan, and Khandan Mahabadi are imprisoned at Evin prison, serving a collective 15-and-a-half-year sentence on unjust propaganda and national security charges. At Evin, the trio have been denied hospital visits for necessary medical care, and Abtin and Khandan Mahabadi have both contracted COVID-19. We call upon you, President Raisi, to release Abtin, Bajan, and Khandan Mahabadi; acquit them of all charges in the legal case wrongfully brought against them; and cease official retribution against all writers exercising their right to express themselves freely.

Abtin, Bajan, and Khandan Mahabadi’s convictions are the result of a years-long investigation into their advocacy and writings beginning in 2015, when their homes were raided and writings confiscated. In 2019, the three stood trial and were convicted to a collective 18 years in prison for “propaganda” and “colluding against national security.” An appeals process reduced Bajan’s sentence, but the trio was summoned to prison on September 27, 2020.

These three writers—poet, screenwriter, and filmmaker Baktash Abtin; novelist and journalist Keyvan Bajan; and author, literary critic, and popular culture researcher Reza Khandan Mahabadi—have fruitfully contributed to Iran’s rich literary history, writing books, poetry and short stories, and editing multi-volume encyclopedias of Iranian fiction and oral histories of great writers. Each of them has also played leading roles in Iran’s literary community by serving on the board of the Iranian Writers Association (IWA), an over 50-year-old professional group of writers in Iran that has been banned since the 1980s. Despite the risks, Abtin, Bajan, and Khandan Mahabadi have nevertheless carried on the legacies of late Iranian poets, intellectuals, and dissidents by organizing memorials, literary events, newsletters, and other publications—activities that, to the judiciary, amount to serious crimes.

It is high time the Iranian state respects the free expression rights of Iranian writers, poets, and thinkers and recognizes the rich traditions of Iran’s diverse literary community. We call on you, President Raisi, to end the unjust imprisonments of Baktash Abtin, Keyvan Bajan, and Reza Khandan Mahabadi, and to release all those jailed in Iran for exercising their freedom to write.