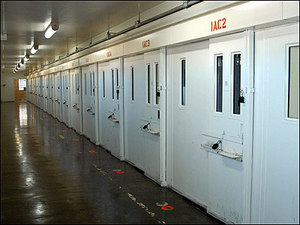 Steve Champion, a prize-winning writer in the PEN Prison Writing contest, went on hunger strike in the Adjustment Center (solitary confinement) of San Quentin’s death row from October 4 through October 19. The strike was in protest of the harsh conditions and practices of the adjustment center, where he and another PEN prize-winning writer, Anthony Ross, have been held for nearly seven years. With Ross and another death row inmate, Crips founder Stanley “Tookie” Williams, Champion determined many years ago to turn from gang activity to self-education and constructive action. Nevertheless, Williams was executed in 2005, and at the same time Ross and Champion were thrust into the Adjustment Center. Champion became a crusading reporter and published a book, Dead to Deliverance: A Death Row Memoir. Inspired by the Pelican Bay strikers against solitary confinement, Champion and his fellow prisoners drew up a list of demands, which appeared in the July 3, 2012 issue of the San Francisco Bay View.

Champion ended his strike October 19, after having lost over 51 pounds and having at least one major demand met: he has been promised that he will be released from his highly restrictive confinement after seven years of being held in “the hole.” While Champion has yet to be moved from solitary, his advocates are cautiously optimistic and point to his writing and the calls and letters from outside supporters—such as PEN Prison Writing Committee Members—as having made the difference.

Steve Champion’s case is part of a far larger problem; solitary confinement is considered by human rights groups to be a form of torture. In an article in Mother Jones, Shane Bauer (one of the three US hikers imprisoned in Iran for being suspected of espionage) compares his incarceration to his recent investigation into the conditions of solitary confinement in the US. From the article, which can be found here:

“Is long-term SHU [solitary confinement] confinement torture? The ACLU says yes. Physicians for Human Rights agree. The Center for Human Rights and Constitutional Law and several other prisoner rights groups recently filed a petition with the United Nations claiming just that. Human Rights Watch says at the very least, it constitutes cruel, inhuman, and degrading treatment, which is prohibited by international law.”

In fact, an inmate can be sent to SHU for having an reading material in his cell like the one Steve wrote for San Francisco Bay View. Or for writing a poem.

“Possession of Machiavelli’s The Prince, Robert Greene’s The 48 Laws of Power, or Sun Tzu’s The Art of War has been invoked as evidence [that can send an inmate to solitary]. One inmate’s validation [identification as a gang member] includes a Christmas card with stars drawn on it—alleged gang symbols—among Hershey’s Kisses and a candy cane. Another included a poetry booklet the inmate had coauthored with a validated BGF member. One poem reflected on what it was like to feel human touch after 14 years and another warned against spreading HIV. The only reference to violence was the line, “this senseless dying gotta end.””