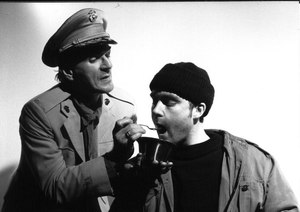 Stubbs: MY THING HANGS LIKE DEAD MEAT!!! (Pause. White couple turns and stares at Stubbs. The Colonel ignores them. He’s busy taking several toy soldiers, tanks, airplanes, and ships out of his bag and arranging them on the table in front of him. Stubbs just stares into space.)

White Woman (to Glory Bee): I thought this was supposed to be a family restaurant.

Colonel (moving toys around on table): She thought you were my son. Now. When you were hit, Stubbs—you were backed up against the mountain. Is that right? Pretend the sugar is the mountain. Right here. Just pretend. (Colonel moves the sugar dispenser into position.)

Stubbs: Backed up against the mountain.

Colonel: You had heavy enemy artillery plus warships firing into you from offshore. Let’s say the knives will represent the shoreline. (Colonel moves knives into position. Stubbs picks up a fork.)

Colonel: Forks? All right—fine—forks. That’s fine. We’ll say the forks are the shoreline. Forks will do well enough. (Colonel exchanges the knives for the forks and marks the hypothetical shoreline.) Now—from the top of the mountain— Let me get this straight, now. Only you can verify this because you were there, Stubbs. I’m just going on hearsay. From the top of the mountain you were backed up by your own defensive artillery plus militia. Is that right? (Stubbs just stares at the forks and toys.) Does that seem right to you? The way I’ve got it set up? You’re the expert on this. (Stubbs reaches over from his wheelchair and moves one of the toy pieces into a different position.) Good. Is that pretty close to the way it was? (Stubbs just stares at the table.) So, in effect, you were caught in a cross fire? Isn’t that fair to say? You were backed up against the mountain, being fired upon by enemy artillery while your own defense continued to pound them from behind you. Firing across your heads. There was nowhere to run.

Stubbs: When I was hit—

Colonel: Now hold your horses. Just wait a second. We’ll get to that. I want to reconstruct everything up to that moment. I know we’ve done this before, but there’s certain particulars
that still escape me.

Stubbs: When I was hit there was no sound.

Colonel: I realize that! You’re jumping the gun. That’s not important now. What I’m trying to figure out is the exact configuration. The positions of each element. A catastrophe has to be examined from every possible angle. It has to be studied coldly, from the outside, without investing a lot of stupid emotion.

Stubbs: I was hit in silence.

Colonel (slamming table with his fist): THAT MAKES NO DIFFERENCE!! (An explosion offstage in the distance. Pause. Silence. They stare at each other. The white couple is staring at them. Suddenly Stubbs backs his wheelchair up and then wheels himself over to the white couple. He parks the wheelchair upstage of their table. Still in booth.) Stubbs! Don’t be childish. We have to face this thing together. You know that as well as I do. There’s no point in running off in a huff. Sooner or later we have to face it.

Stubbs (to white couple): The middle of me is all dead. The core. I’m eighty percent mutilated. The part of me that goes on living has no memory of the parts that are all dead. They’ve been separated for all time. They’ll never have a partner. You’re lucky to have a partner.

Colonel: Stubbs! Front and center! Scat like a scalded dog! (Stubbs wheels himself away from the white couple and returns to the booth where the Colonel is pouring some whiskey from a silver flask into the two cups of Glory Bee’s coffee. Stubbs parks by the booth and the Colonel.) Now, look, Stubbs—let’s have an understanding here—all right? We’re in a public situation. We have to use a little diplomacy. Some discretion. Restraint. You have to remember that the enemy is always sneaking. Always slimy. Lurking. Ready to snatch the slightest secret. The smallest slipup. Here— Have a drink. I’ve doctored it up some. Go ahead. It’ll open your pipes. (Colonel offers a cup of coffee laced with whiskey out to Stubbs. Stubbs takes it but hesitates to drink, Pause.) Well, go ahead. It’s perfectly good whiskey. I’ve never steered you wrong on that score, have I? After all, you’re not exactly a candidate for assassination, are you? Let’s not get carried away with ourselves. (Stubbs drinks.) That’s the ticket! No point in getting worked up over nothing. We’re in this together. Let’s have a toast. (They click cups and drink together.) TO THE ENEMY!

Stubbs (holding his cup high): TO THE ENEMY!

Colonel: Exactly. WITHOUT THE ENEMY WE’RE NOTHING!

Stubbs (toasting): WITHOUT THE ENEMY WE’RE NOTHING!

Colonel: Exactly. Where would we be today without the enemy?

Stubbs: I don’t know…where would we be?

Colonel: THE ENEMY HAS BROUGHT US TOGETHER!

Stubbs: THE ENEMY HAS BROUGHT US TOGETHER!

Colonel: Exactly right. Now, there’s no point in pouring your heart out to strangers, Stubbs. You oughta know that by now. No future in it. Where has it ever gotten you? Nowhere. Plain and simple. Absolutely nowhere. We have to stick together in this. We’ve got a history. Nobody knows that better than you and me. Best a stranger can do is pretend and we’re both past that, aren’t we, Stubbs?

Stubbs (toasting): WE’RE BOTH PAST THAT!

Colonel: That’s the truth of it. Pretending is not for us. What we’re after is the hard facts. The bare bones.

White Woman: Would you both pipe down over there. This is a family restaurant.

White Man: That’s absolutely right. (Colonel turns and stares at White Woman and takes another drink, then turns back to the toys and speaks to Stubbs in a hushed, conspiratorial tone. White Woman leans out of her chair toward the Colonel, trying to eavesdrop.)

Colonel (hushed): Now look, Stubbs— The placement of these two figures right here is the key to the whole thing. You see these two? (Colonel holds up two toy infantrymen and shows them to Stubbs.) The red one is you and the white one is my son. Have you got that? Here— Take a look at them. Check them over carefully and memorize the colors. Try to study every detail. Every nuance. Let nothing escape your scrutiny. (Stubbs takes the two toys and turns them over in his hands, examining them closely. Pause.) Red and white. Red is you. White’s my son. Okay? Have you got that? Are we on the same wavelength? (Stubbs just stares.) Now, what I’m gonna ask you to do is place those figures down in exactly the right positions for me. Only you can know this, Stubbs. Place them exactly where you and my son were standing when the artillery struck you.

Colonel: No! No blue. Just red and white.

Colonel: NO BLUE, Stubbs! NO BLUE!

White Woman: We’re trying to have a peaceful time here, if you don’t mind. (Colonel crosses to White Woman, whispers in her ear, then returns to the booth.)

Colonel (to Stubbs): Place them down in the battlefield exactly as you were positioned on that fateful day. Now, just remember that the sugar is the mountain and the forks are the…

Colonel: Go ahead. (Glory Bee enters from right with the banana splits on her tray. She is carrying them much the same way as she was trying to balance the coffee—moving very slowly with all her attention on the tray. Candles are burning in the center of each banana split. The candles are much bigger than birthday candles.)

White Man: There she is.

White Woman: She ought to be shot.

White Man: Is that our order? That’s not our order, is it?

White Woman: No, it’s not. It’s their order.

White Man: We’ve been here longer than them, haven’t we?

Colonel: Set them down, Stubbs.

Stubbs (holding toys): Blue is me?

Colonel: White is you! There is no blue. There’s only red and white. Go ahead and set them down. (Stubbs keeps staring at the table, holding the toys in his hand.)

White Woman: We’d like a word with the manager, miss. Oh, miss!

White Man: She’s completely ignoring us. (One of the candles blows out.)

White Woman: We’d like to speak to your manager.

Colonel: Stubbs, get ahold of yourself It’s a simple equation. All we’re trying to do is re-create a moment in time. A catastrophic moment in our personal history. That’s all there is to it.

Stubbs (holding figures): When I was hit—

Production History
State of Shock was first presented by The American Place Theatre (Wynn Handman, Artistic Director) in New York City on April 30, 1991. It was directed by Bill Hart; the set design was by Bill Stabile; the costume design was by Gabriel Barry; the lighting design was by Pat Digman and Anne Militello; the sound design was by J.A. Deane; and the production stage manager was Lloyd Davis, Jr. The cast was as follows:
COLONEL John Malkovich
STUBBS Michael Wincott
GLORY BEE Erica Gimpel
WHITE MAN Steve Nelson
WHITE WOMAN Isa Thomas