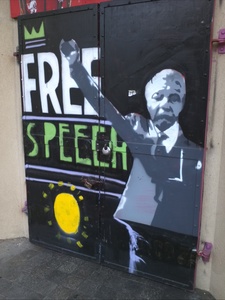 Two days after Nelson Mandela’s burial, South Africa faces an assault on press freedom that cuts against the late leader’s unwavering belief in freedom of expression. PEN American Center has been working with South African PEN since 2011 to support their free expression advocacy and programming. In 2011, we joined the Center to advocate at the UN Human Rights Council to stop the Protection of State Information Bill (Secrecy Bill) and other restrictive legislation. We have also embarked on a programmatic exchange between our centers with support from the Ford and Jerome L. Greene Foundations.  The following press release vehemently opposes this latest in a series of encroachments on press freedom in the country:

SA PEN is profoundly concerned at the summary dismissal last week of acclaimed Cape Times editor Alide Dasnois. Preliminary information is that Dr. Iqbal Survé, chairman of the Sekunjalo group which recently bought the Independent Newspapers group, took personal exception to an earlier item in the Cape Times reflecting unfavorably on another Sekunjalo company. Dr. Survé contributed a rebuttal duly published in the Cape Times while also reputedly initiating legal action against the editor (Dasnois) and the responsible journalist, Melanie Gosling. Subsequently Ms. Dasnois was dismissed on the unrelated ground that the Cape Times had not made the death of Nelson Mandela its front page lead. It would appear that Dr. Survé acted impetuously before realizing that the Cape Times had in fact produced a remarkably comprehensive wrap-around supplement about Mr Mandela.

SA PEN has the impression that the new owner of Independent Newspapers has not yet comprehended the treasured and universal concept of editorial independence, a deeply established principle that distinguishes all highly regarded information media, and is fundamental to the success of every democratic open society. SA PEN is already alert to the threats to democracy in South Africa posed by the recently enacted “Secrecy Bill”, and we are well aware that “freedom of the press” is under attack in all oppressive regimes around the world. It is particularly unfortunate that this matter has coincided with the passing of Nelson Mandela and the wide publicity given to all that he stood for.

SA PEN also dismisses claims by Survé that the removal of Dasnois was because the paper had suffered a decline in circulation. The circulation decline is similar to that suffered by most newspapers in South Africa and elsewhere in the world as a result of the rise of social media. The Cape Times case was aggravated by the Sekunjalo decision to change another English language daily in Cape Town, the Argus, from an evening to a morning paper in competition with the Cape Times.

The seemingly reckless dismissal of Dasnois is being taken up by the SA National Editors Forum and SA PEN aligns itself with any considered move to help restore the editorial independence of the Cape Times and the job-security of journalists in the Independent Newspapers group.