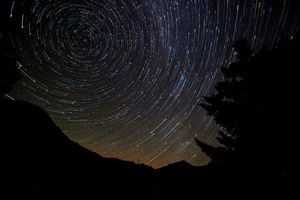 We were married three days when we lugged our new telescope out into the snow. Vastness, mystery, turbulence of light—I wanted them all with you. But when we looked through the lens and found only a small ghostly Saturn, we left that leggy instrument like a bent scarecrow in the yard and walked up a long hill to what felt like the edge of the earth. Your hands swiped gently up at the sky as you named the constellations, each syllable a puff of white smoke into the cold. I could already see the faces our children would have.

We could have jumped. We could have fucked in that darkness. But we descended the hill quietly, and ten years went by. We didn’t have children. We had five suitcases. One day, I packed two of them, and I drove away.

We were married six years when I met a man. We spent an evening together, and those hours were a bridge from which I never returned. I didn’t know how to tell you about him. It seemed that to tell you about my grief would have only made it ours. Nothing is simple, and everything is simple. Maybe if I’d conjured the words, they would have formed a different kind of bridge, between us.

He was upside down. I’d arrived at the concert late, and that was the first I saw of him. Immediately, I shifted in my seat and pointed my knees at him—an exact movement, the line from my knees to the line of his body straight as a horizon. And then in some yogic flash, he was upright, strumming his guitar, slithering lithely around the stage, into and into the music he was making. He was alone up there, bare-chested and barefoot and moving like surf.

When the concert was over, I stood on the autograph line. I’d never asked anyone for an autograph before, but on that night, I was an animal following musk. I couldn’t say what one person looked like in that crowd. There was just the landscape of it—this rocky bunch of slightly moving heads all focused on one man who could and could not be seen, depending on your vantage point. I was in the back, so all I had were the heads. But the line was moving slowly, and after what seemed like a second concert of chatter, I was nearing the edge of the terrain.

A space opened, into which I gazed, and saw him. He looked small somehow, just standing there off-stage in his leather jacket, with his sheared-bare head and a vulnerability that was raw and surprisingly tangible. His eyes were nearly transparent, an echo of blue, and I saw there was something guttural in his throat, something not yet heard.

The next night, I found myself blazing through the highway miles like some crazed stalker to see him do it all again. And then I was pivoting myself so that my knees formed the end of the arrow between us. And then I was on the autograph line again, with a different CD.

And then I was in his hotel room.

We closed the door and faced each other, and we traveled through the million mirrors of each other’s eyes, and no one flinched, and no one spoke, and standing there we crossed a threshold, we looked into the eye’s black hole and were fearless with our exploration. I don’t know how long we stood there. But I know that I was bared back to dust.

In his bathroom, I splashed water on my face and fingered the bristles of his toothbrush while he cooked vegetables and garlic in a hot pot on the hotel room desk. We sat on the edge of the bed and ate.

He moved like a snake. He lunged at me, this wide rush of him, and if I hadn’t been shivering from a combination of desire and fear, I might have chuckled. But when he leaned in, when he got almost to kissing but not kissing, the walls fell away and the bed dropped away and my skin held nothing in anymore, nothing that really mattered anyway, and I could feel and hear and already taste his breath, and when his lips took my lips, I knew then that what I was experiencing was drawing a line—even with the world temporarily erased, it was drawing a line between me and the rest of it: I would always be alone.

He didn’t sing to me, but he pulled out a flute, and he played it softly against my neck. Again, I said, and he played it against my sternum, which pounded back against the vibration. Again. He played it along my waist, against my hip, and down the dip of my belly. And the sound, mellifluous and persistent, did not stop until I devoured it, until I took it into me wholly, while outside there were stars I couldn’t name.