So Here We Are 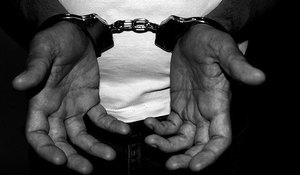 It was August. Sweltering and exhausted, in an old railway carriage with burgundy coloured panelling, we were travelling, eating, bored out of our minds. Outside, the twilight floated by, elongated and heart-breaking. The journey lulled us. Somewhere in Mordovia, at a station as dispiriting as an afternoon nap, we stopped. We were delayed longer than might have been expected, but the doors were not opened and nobody was allowed out to stretch their legs, have a smoke, or just stare at the uninspiring scenery. Convicts were being unloaded. They had been travelling in the next carriage, which bore the number zero. The whole compartment was immediately glued to the window with morbid curiosity.

Calmly, without fuss the guards unwound a drum of wire with bunches of handcuffs hanging from it. Calmly, without fuss, they brought all the prisoners out and made them squat on their heels with their hands behind their heads. They looked as though they might be about to start dancing. With their travel bags and in the ordinary clothes they were wearing they looked like ordinary people and it seemed bizarre for them to be squatting in such a ridiculous position.

The people in the carriage were not happy. This humiliation of other people was disturbing. There was something taboo, something wrong and pathological, as if they were spying on someone else’s private life, or getting a glimpse of the afterlife, frightening but alluring, and something you could not stop looking at. “Why do they need that wire?” a man asked, looking in and stopping in the doorway, resting his hand on the lintel, unable to look away. “There, do you see that?” rasped a woman trader, shoving her way in behind him. “Oh,” she said, “these are not our people,” and reversed back out. “Did you see?” she yelled, already from the next compartment.

The prisoners were conducting themselves more calmly, with dignity, even, like actors playing a part, conscious of the audience watching them. You were afraid they might look up and make eye contact, but they graciously did not turn round, and instead looked out into the emptiness, only twisting their lips in a half-smile, as if aware of what they represented to us.

When the wire was unwound, the empty spool was thrown to one side to a soldier who had a dog. The dog jumped up, thinking someone wanted to play with it.
From behind a distant island
To the river wide and free …

The words of a Cossack song in praise of Stenka Razin suddenly floated up out of the stifling silence of evening and burst into the carriage, heedless of the double glazed window frames still in place since the winter. It was unclear who was singing, because there was no one on the platform other than the prisoners and their guards. The song broke off just as abruptly.

They were handcuffed in pairs, across the wire, and only then allowed to stand up. The first was a Russian, a tall, lean lad in a blue vest and with two bags. His eyes were clever, calm and defiant. He showed not a hint of fear, not even of concern about his future. He was chained to a stocky Uzbek. The lad glanced at him, without contempt but with a clear sense of his own unchallengeable superiority. He casually prodded the bags with his foot, indicating to the Uzbek he was to carry them.

A truck with a body like a metal box drove up. There was one barred window in the door. The prisoners came to life, looking now like any group of people on holiday. They have only recently got to know each other, have talked on the journey, and now anticipate a change of scenery. They are neither pleased about that, nor frightened, just waiting for it to happen.

The train moved and suddenly they all turned in our direction, trying to catch the eye of those who were leaving, and an inexplicable anxiety came over them, as if they had suddenly realised what we represented to them. The whole compartment jumped back from the window. The man retreated into the corridor and headed for the toilet, as if all this time he had only been on his way there.

Right at the end of the platform stood women, and they too were prisoners. They were buxom Russian women, their bodies like rustic vats overflowing with rising dough, and with whorish faces. You could hardly tell whether one was a man or a woman. Her head was shaved, she was wearing a misshapen, faded shirt which barely covered her flat breasts, and she had no discernible figure. She was laughing with her fellow prisoners, cheerful, defiant, and then suddenly, the embodiment of anguish and passion, she burst into singing The Vision of Stenka Razin at the top of her voice.
’T was not evening when I dreamed, –
And I was not abed, –
That an an ill east wind tore off the cap
from my unruly head …

The heat was stifling and we felt bad, unbearably bad.
The other women waved at our departing train.