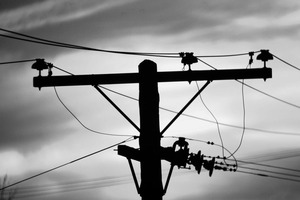 Today in the PEN Poetry Series, guest editor Maggie Nelson features six poems by Lily Mazzarella. About Mazzarella’s work Nelson writes: “For over twenty years now, Lily Mazzarella’s poems have been teaching me and saving my life. They come from, or grant access to, the inside of rocks, sex, language, anger, depression, awe, and more. I never cease to be transfixed and moved by their music, their weirdness, their knowledge, their generosities. It is a strange fact that Lily hasn’t yet published a book; when she does—and I hope someone will heed the call—it will be my Bible. In the meantime, she’s had other work to do—she’s a clinical herbalist who heals others with plants, she makes things from the earth with her hands. Like these poems.”

That bird’s nest is made of panty liners.

The low metal chicken houses house death, and shit, they have no windows
only vents venting death, it is the worst smell I have ever smelled
and the men smoking on break wear blue jumpers orange plastic
jackets move like oompa loompas
so I suggest eating other eggs

The control panel that curls my hairs, drains sinuses
may choose to function differently
as I desire elasticity around the knees for my new
hobby

I miss my cat. I will never forget her purple tongue, how stiff
she was. She was
a creature and I loved her.

Dear Sir: Your sheep are very pretty. They have
pretty eyes. I didn’t know sheep could be
so pretty. Sir, your field of thistle turned to pappus
and flew away.

All summer, the road was littered
with songbirds, their heads smashed in
I was poisoned by absinthe, and set a field
on fire, and spent the next two days
in bed, spitting up
oatmeal at you

The cows I like best are the ones in the woods. The thin maple
forest. They cool off there, and don’t spook so easily
hooves slopping up to the first joint in mud

I panic. There are long bloody pendulums
swinging from her huge vagina. Suddenly see
She’s not hurt, there’s a calf
licked white, cow-licked
lying utterly slack to the left
of her back hoof, born still
and quiet; the cow
she’s just chewing.

My knee busted up a few months ago,
days before going west    but I struck a deal
with the control panel
and was allowed to hike

indefinitely and above
the tree line.

The turkey jerks itself through the yoga mats
shakes, vigorously
Out of its green-brown luster fly
clods of dirt  ticks  a pack of matches
its latticed wattle briefly
and completely translucent

Some day you may emit a spongy brown coral
You may deepen like a berry in cartographic
blotches and a giant moth
could rise from your chest, knocking
dust everywhere
You could awake in a tangle of needles
feet bespeckled in sap
curl towards the wall in the fashion of tendril
school. Don’t worry.

Or for example, a mother is sure to tell you
that your armpits are two crotches hanging out over a
bridesmaid’s dress
One, two

The no-pants woman rolls over on the sun deck
winks at no one
in particular
“I told my husband It’s not the ones
who are always around you have to worry about
It’s the ones
who are never around.”

We could tamp down the earth and make camp here
Look at the underwater and decide: Is it heart or octopus. Heart, I say.
Silence. How do you keep dirt clean, whip it lightly with a bundle of sticks
Sweep the dirt, sweeping sweeping until it is flat clean dirt

I take your hand and run you through
the fragmites, end at the squalid august bay. Horseshoe crabs fuck
and rot fuck and rot. Noting that the water is a thick stew of jellyfish and salt
a paste of sting. Biplanes whir above. I get back to my roots: sit on top of the van,
drink seven beers. I’ve been fallen in love with that way, lasting at times to thirty-six hours

more than enough to be cruel, stupid, get pebbles lodged in my back. Remarkably tan
and iron-stomached; when drunk the holy Virgo perfume
lifts off me and I watch the moon rise, glide perfectly across the midnight
sky. Unanxious. She has sucked all the water out, exposing a slick red chest,

stretching to the horizon. In one missed moment
she put all the water somewhere else. Oh! the end won’t be anything like we’ve imagined:

She’ll stand sadly in my apartment. “Why did they paint over the mahogany?” she’ll ask
“It was the heart of a tree.”

I will rescue the convent garden.
Clean chicory and over-
grown. A plane flies
too low, carries our voices
away. Riveted seams
on its soft grey
belly. At least
it’s not death,
curled back
like a yogurt top.
I prefer to build
this wall, for the time
being. Though not the straightest
I’ve seen, or the prettiest
it is a wall, with all its standing
up, its attention to
nothing. What passes
for my own attention is not nearly
so vertical. Nun fantasies
corrupted by the third
year. Something always
happens. Sister.
But I’d have been
happy, content until proven

otherwise. And I’ll miss my spare
room and utter lack
of hair. I turn
the compost, wrists
clicking.  You move
as one body
off the ground, hand
tangled in grass. How

my friend
are we
assembled?
Swallows careen
above us, seed
a blue-green cloud.
I am
to look
at your face,
just see it.

I Had Two Manhattans
(poems for Molly)

It began hours ago, a tropical
depression:  cats screech into the road
wake and doors slam, jars overturn, magazines slap
to the ground

The giant black walnut
dives, ducks, comes up for air
folded, a batter
of finely serrate leaves.
I watch you
from the kitchen, thighs itching
feet grown cold on the floor

This day began two years ago, her tangle
of voice
on the phone
my marrow working very hard
Deep down,
it’s Tuesday
there were caves and cave voices, underwater
caves, Jersey to Mexico City

Really it was quiet and I didn’t turn on any lights.

curl fingers under and
pull up
my viscera curtain
the tough and fatty apron
shielding me from splinters
in my general direction.

behind a thin
muscle
of clouds.

Get out. Stay out.
I mean you.

What I Learned From Pictures

If you don’t already know it, you will
soon: it is easy to fall in love with oneself
on a bleached-out path, at a distance, while
palms are blown to their café-au-lait
undersides.

And it is bewildering
the accumulation of park-
like places, our local participation in car
trunks, while at a great distance, cancer
of the neck
and terrific eye strain in
the weak, young and small. One might be tempted
to think
one has blown it.

You make the call. You actually pick up the phone
and make the call. When she died, she disappeared from
the photo, bedsheets still impressed. Live bodies
remain, teeter sheepishly around the impression, hair
blown and combed for the holiday. We, the coat-
carrying clamber in
to the wrinkle of her. The room
a pitching
grey stomach. She weighs nothing
and speaks in squeaks, and we leave her anyway,
alone in bedsheets. Clacking
down the hallway, its high shine floors and large
finger-crunching doors. Our warm impressions
swallow her, fondue-like.

Which is not to say we killed her. Or that she actually dis-
appeared. A boyish priest recommended her
to Jesus: Her wafer of a body offered up for his
ultimate consumption. What happened after that
is beyond speculation, but likely involved going
straight for some time, and then taking
a right, and going straight again.

What killed her skittered over the too-hard floor, danced over our
feet, and killed not
us. Doors warned of the virus. Upon waking
one recalls that she did not disappear from actual
photos. Upon not-waking: that young priest, if not
Jesus, has at some point
(or many) been blown, one hopes by willing hoovering
mouths, not simply a mouth cowed

She was not
afraid, at this point mostly gesture, a wisp drifting
in a space shaped much like a potato chip
though infinitely
larger, and soft. A sepia crescent of

Sex, and one fine wool suit, leaned up against a thin
wrought gate. Come half-way
round the world, and re-issued for this,
our late consideration

Once a week, the Pen Poetry Series publishes work by emerging and established writers from coast to coast. Subscribe to the Poetry Series mailing list and have poems delivered to your e-mail as soon as they’re published (no spam, no news, just poems).