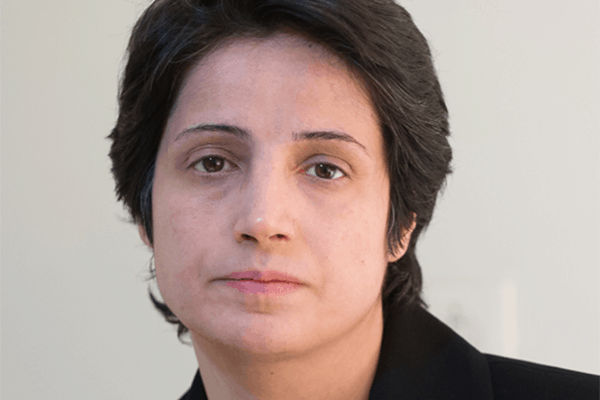 Update: On December 2, 2020, authorities ordered Nasrin Sotoudeh to return to Qarchak prison against the advice of a medical professional and despite her contraction of COVID-19 after coming into contact with prison guards afflicted with the virus. On November 7, Sotoudeh was temporarily released from Qarchak prison on medical furlough—a decision a medical professional recommended that authorities extend. PEN America welcomed Sotoudeh’s temporary release, but continues to advocate for her immediate and unconditional release, urge authorities to halt harassment against her family, and express deep concern for her precarious health. On September 25, Nasrin Sotoudeh ended her hunger strike due to her severely weakened physical health. Sotoudeh went 46 days without food, five of which she spent in the cardiac care unit of Taleghani hospital to protest the Iranian authorities’ ill treatment of people unjustly imprisoned during the COVID-19 pandemic.

Despite the conclusion of her hunger strike, Sotoudeh is still subject to a lengthy prison sentence based on spurious charges, her health at risk, and her fight to better the lives and defend the rights of Iranian people persists. PEN America stands in solidarity with Sotoudeh and the principles of her campaign, and we continue to amplify the voices of thousands of people worldwide calling to #FreeNasrin as well as other unjustly jailed political prisoners. Follow PEN America’s advocacy for Nasrin Sotoudeh and other writers at risk around the world.

We write to call for the immediate and unconditional release of writer, human rights lawyer, and activist Nasrin Sotoudeh, PEN America’s 2011 Freedom to Write Award honoree and a co-winner of the European Parliament’s 2012 Sakharov Prize. Sotoudeh, one of Iran’s most prominent voices of conscience, has long been targeted by the Iranian government and is currently being held in Evin prison in Tehran on national security-related charges levied after she advocated on behalf of women imprisoned for protesting Iran’s compulsory hijab law. She is now in critical condition as a result of a hunger strike and must be released immediately to seek medical care.

Sotoudeh announced her hunger strike in an August 11 letter to protest conditions in Iranian prisons during the COVID-19 pandemic, her second such action in support of the release of political prisoners during the pandemic. In May, two months after her first hunger strike, the Iranian prosecutor’s office blocked Sotoudeh’s family’s bank accounts, according to her husband, Reza Khandan. And in what her husband called an attempt to further assert pressure on Sotoudeh, security forces arrested their 20-year-old daughter, Mehraveh Khandan, on trumped-up charges of “insult and assault” on August 17. She was later released on bail, but charges against her have not been dropped. Rather than succumb to state pressure, Sotoudeh has vowed to continue her hunger strike as long as injustices against herself, her family, and dozens of other political prisoners continue. Despite her resolve, however, she faces dire health consequences if her strike continues.

We call on Iranian authorities to drop all charges against Sotoudeh and to immediately release her from prison and into medical care. Further, we ask that Iranian state security forces immediately halt their harassment of Sotoudeh’s family, allow them access to their finances, and drop charges against Sotoudeh’s daughter. For Sotoudeh’s work protecting the rights and lives of women in Iran, her family has been made to suffer. This injustice must be corrected.

We also call for the release of all political prisoners currently held in Iranian prisons on unjust charges; prisoners have disproportionately suffered the effects of the COVID-19 pandemic, and should not be put at medical risk for the politically-motivated charges against them. This is a violation of their most basic human rights.

Sotoudeh has dedicated her life to bettering the lives of Iranian citizens. For her work trying to defend the rights of Iranian women exercising their rights of expression and protest, she has been imprisoned multiple times in dire conditions. And now, for her efforts to defend the rights of political prisoners amidst a global pandemic, she is facing the direst of consequences. It is not hyperbole to say this is a matter of life and death; swift action is needed to ensure that Sotoudeh does not die in state custody. We implore the Iranian government to consider her case, and to stop her unjust persecution so that she can be free to resume her life and her work.