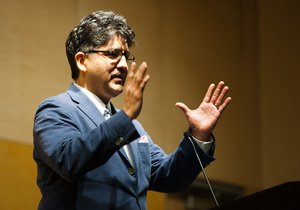 Sherman Alexie’s stunning young adult novel The Absolutely True Diary of a Part-Time Indian has the dubious honor of being one of the most frequently banned and challenged books every year since its publication in 2007. This year, the novel again took second place behind Dav Pilkey’s Captain Underpants. Alexie’s autobiographical story follows a young Native American student as he leaves his reservation to enroll in a white school. The real Alexie is not just a fiction writer but also an accomplished poet and screenwriter who spoke with us last year eloquently—and hilariously—about a wide range of subjects, including censorship, masturbation, poverty, Native American culture, and civil liberties. Here is his take on surveillance:

When you start talking about a surveillance state, certainly on an overall level I get worried and suspicious about it. But I also think, “Welcome to the Indian world!” All of a sudden all these white folks are feeling a slight taste of what it is to be black, living where they’re being watched and judged and potentially a suspect. But of course the government has been spying on us. I was not shocked by the report. In fact, I was shocked that it wasn’t bigger.

You can listen to Alexie speak about surveillance at minute 32.