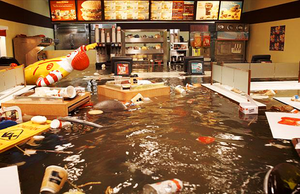 After the Flood there you sit
next to the boat, the fish
gasping for air, the hare finding
nothing to eat yet and all the birds

left behind. There you sit
in the same skirt in which, waters ago,
you boarded the ship, but the dance
has drained from your feet. For once the rain

blew over at last, the water
was lulled mirror-smooth, you saw

with each glance your essence
lost more depth. Now you sit,
ram and ewe already on dry ground,
all at sea in flotsam and jetsam.

Saved two children last night.
They lay under thin black ice
one gone blue, the other grey.
I laid them out on grass
that snapped under my step
wrung their bodies warm and dry
gave them the gust of my breath.

Then I looked out at the morning
that lay lukewarm on the water
put on a tank top
arranged some grasses in a vase
fished two children out of sleep.

It’s a beautiful world, you said,
with these trees, marshes, deserts,
grasses, rivers and seas

and so on. And the moon is really something
in its circuits
of relative radiance. Include

U and N and the wanderer P, in short
the whole solar family, complete with its
Milky Way, and count up all the other

systems with dots and spots and in
that endless emptiness what you’ve got
is a commotion of you-know-what. It’s a beautiful

universe, you said, just take a good look
through the desert’s dark glasses
for instance or on your back

in seas of grass, take a good look
at the deluge of that Rorschach—we’re standing out there
somewhere, together.

In love everything is possible. You doggedly

paper a tree with roses
and say: this was the place
and everyone who passes should

know it. Or someone decides: this deadweight
can’t be lifted any longer, I’ll set it
like stone at the foot of the cliff, but
it doesn’t make walking or breathing

any easier. The asphalt that bridges the river
points up high, the radio
sings Ach and Oh and on the truck
in front of me, shamelessly written

in the day’s filth, it says Now that you’re no longer here
you’re closer than ever before. Exactly so. Who
had the guts, with a single finger in dust, to clear
the way for the most faithful? Soon

the bridge will open, the row will set forth
in obedient motion and I’ll pass
the purified sludge of Zijnstra Inc.
and a declaration of love written in mud.