The Secret Life of Gitmo’s Women

“I would’ve closed Guantanamo on the first day.” – Barack Obama

The quote is pulled from President Barack Obama’s response when asked what he would do if he could go back to the beginning of his presidency. We thought his words were a fitting lead into this week’s Illustrated PEN: Sarah Mirk and Lucy Bellwood’s “The Secret Life of Gitmo’s Women,” brought to us by Guest Editor and MUTHA Magazine Editor-in-Chief Meg Lemke.

One week into President Trump’s presidency, draft memos have been leaked that indicate his administration will promote extraordinary rendition to overseas “black sites” and the illegal use of torture in interrogations. As swift and unsettling as this may be, we cannot forget that extraordinary rendition, indefinite detention, and torture were a part of the United States’ strategy for “winning” the War on Terror, and a blight on the country’s standing around the world.

In “The Secret Life of Gitmo’s Women,” Sarah Mirk and Lucy Bellwood have created an exemplary work of comics journalism. Based on direct interviews with military women who served at the Guantanamo Bay detention facility, Mirk and Bellwood beautifully capture the confusion, regrets, and the lingering psychological issues associated with their time immersed in such a toxic culture.

The stories were first published in 2014, produced by Symbolia magazine, and released on Narrative.ly. 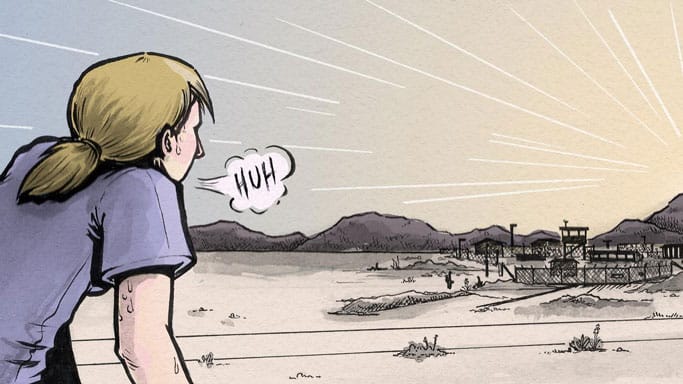 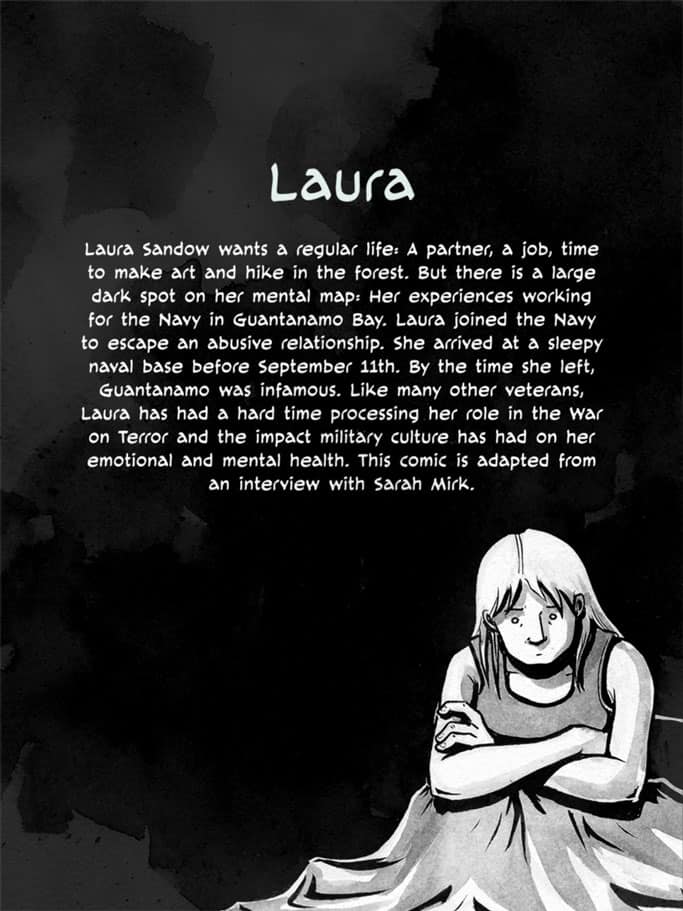 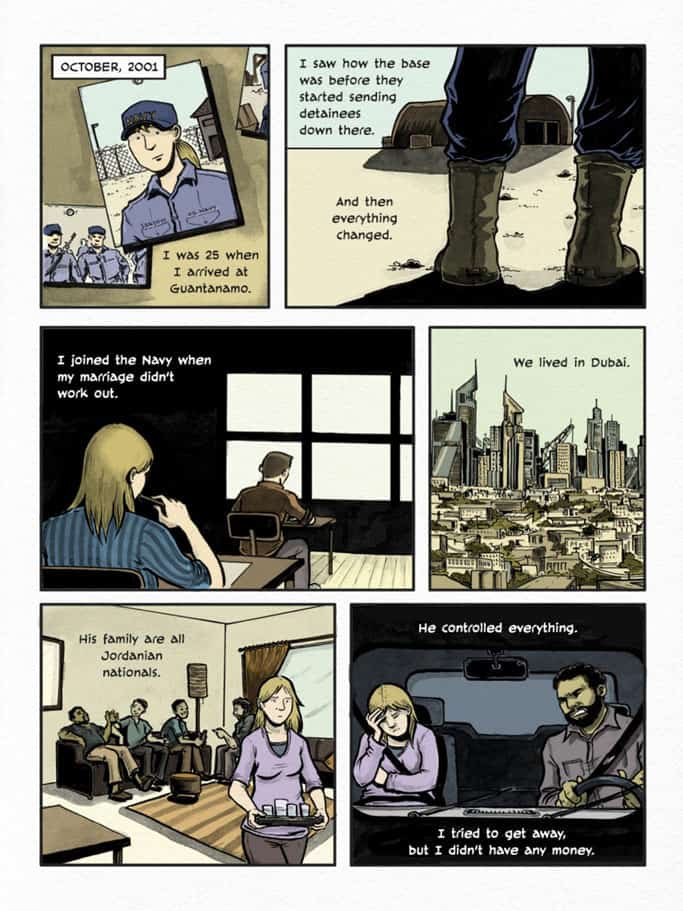 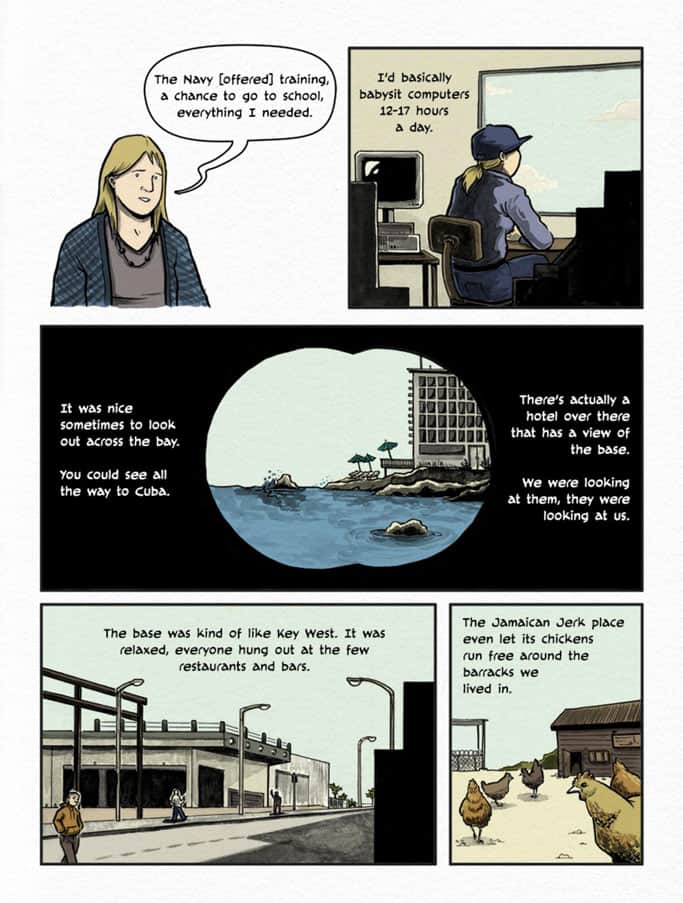 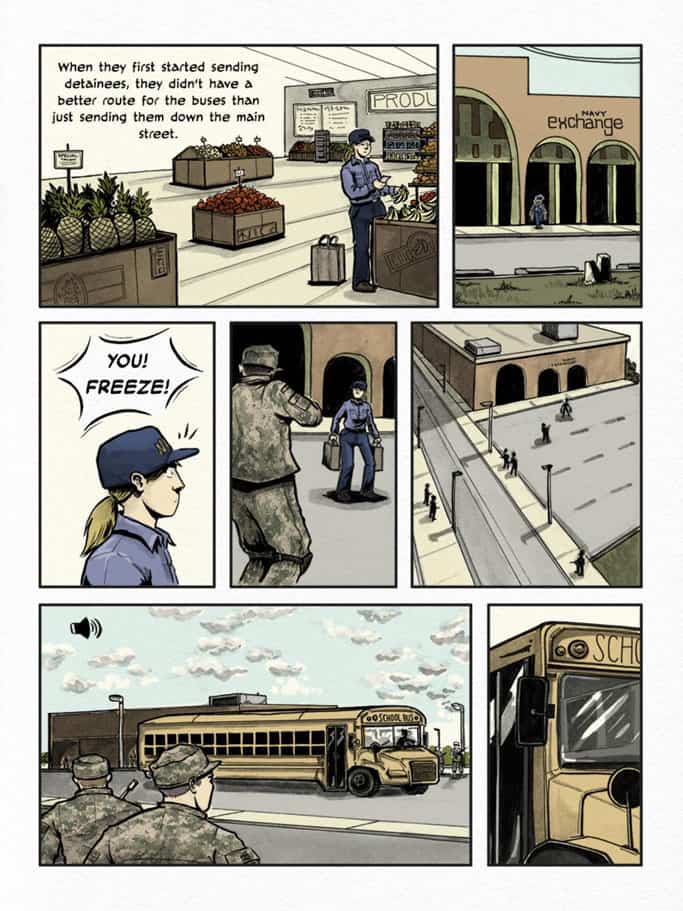 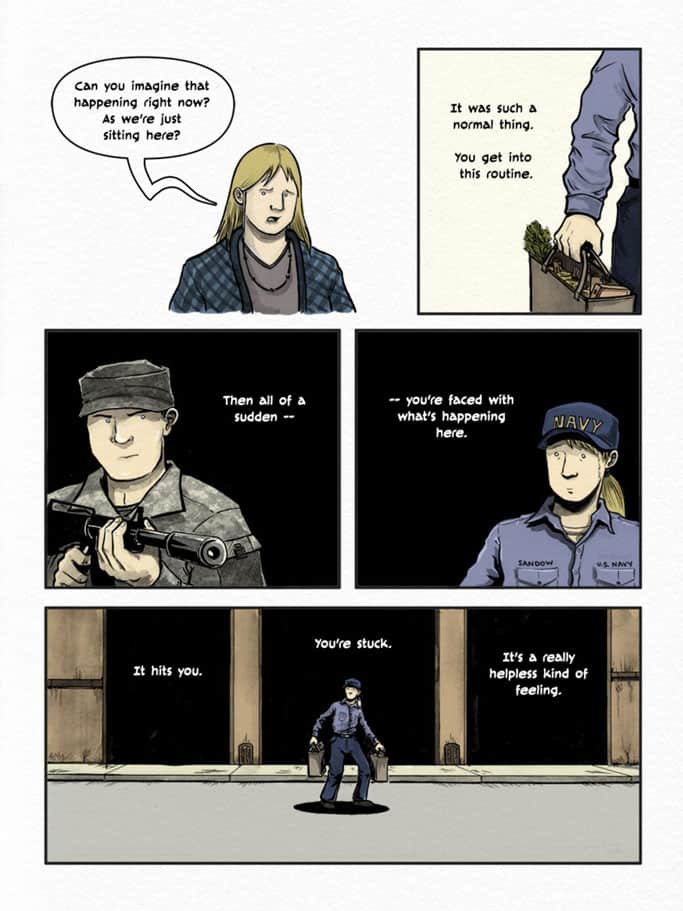 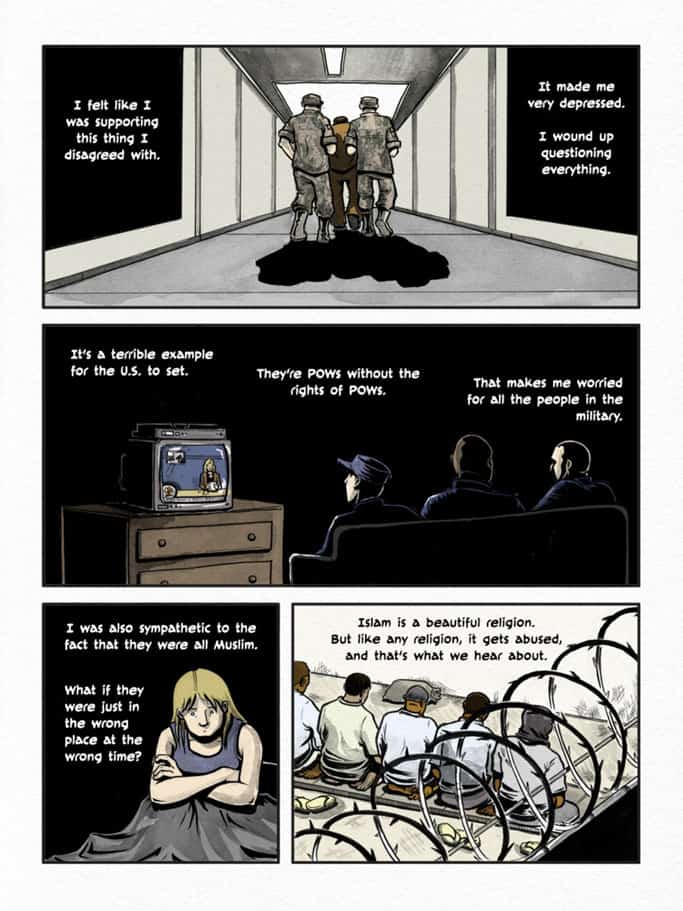 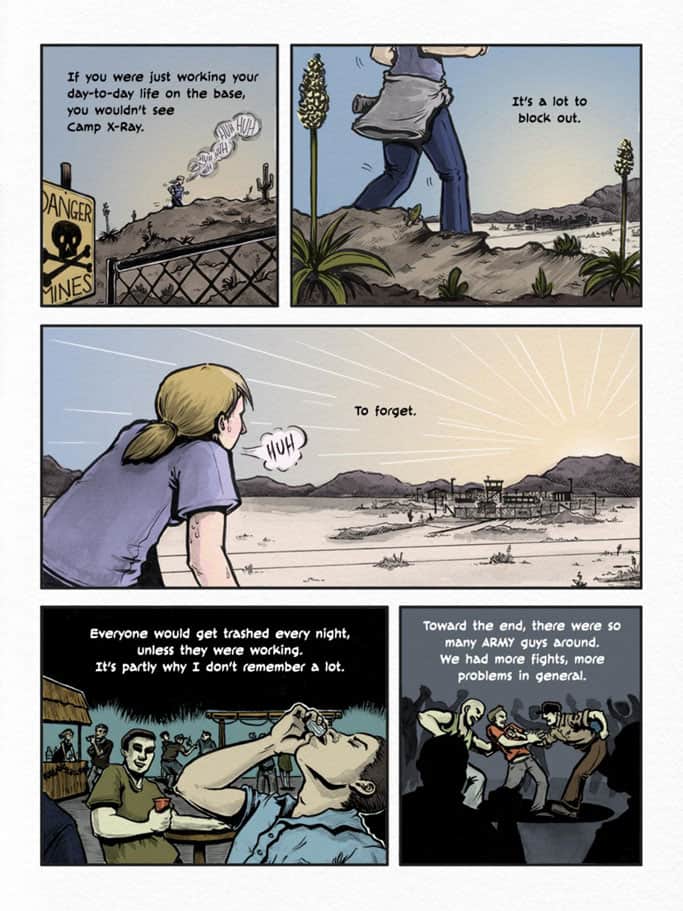 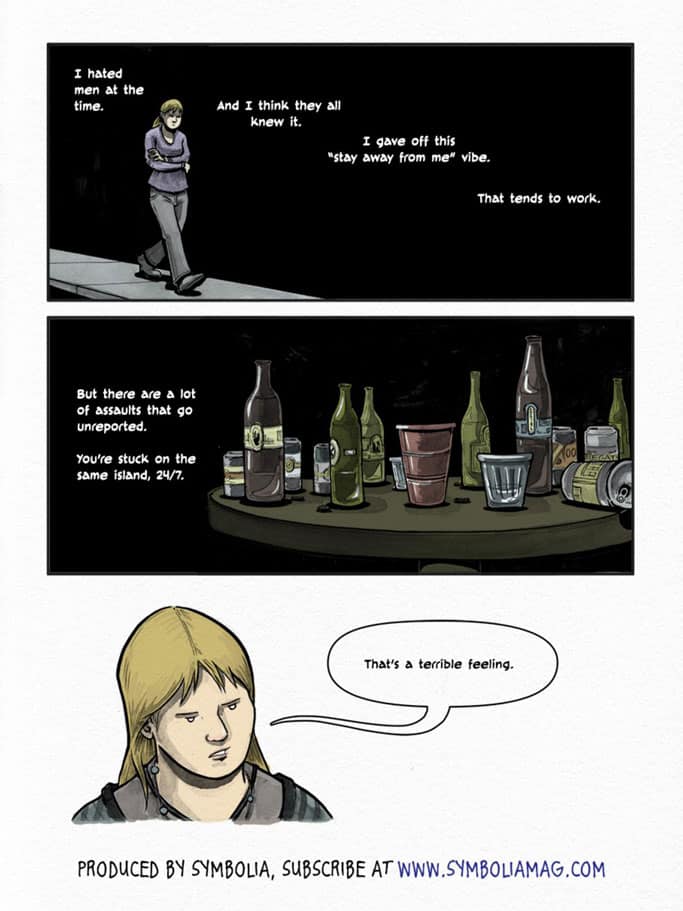 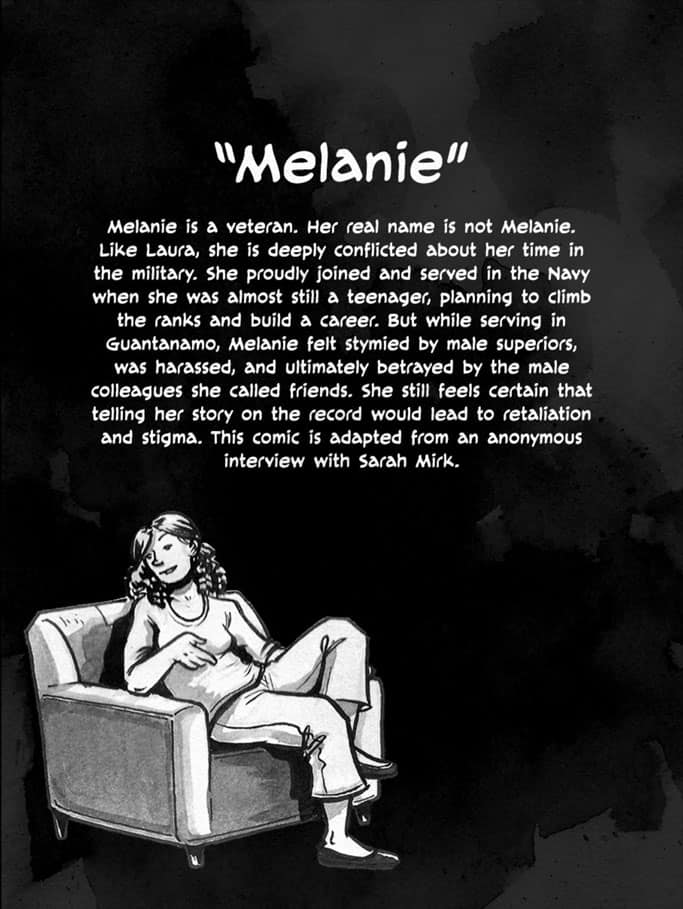 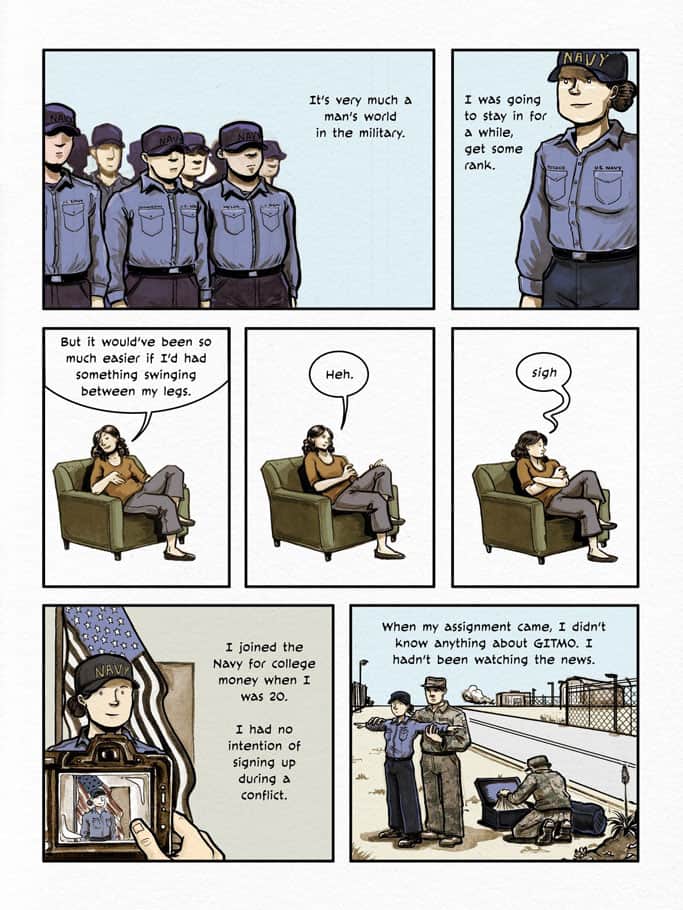 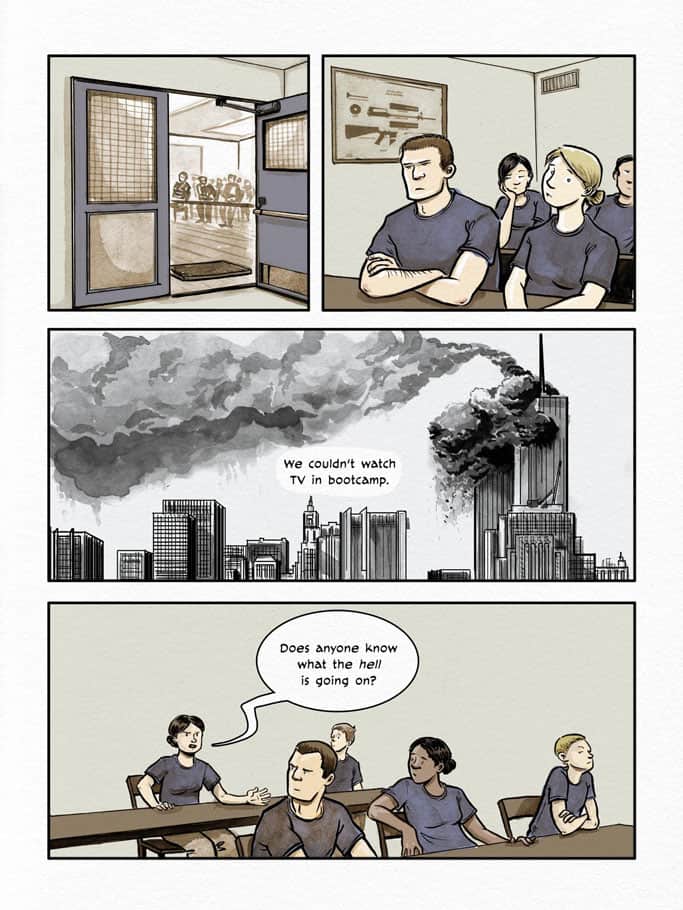 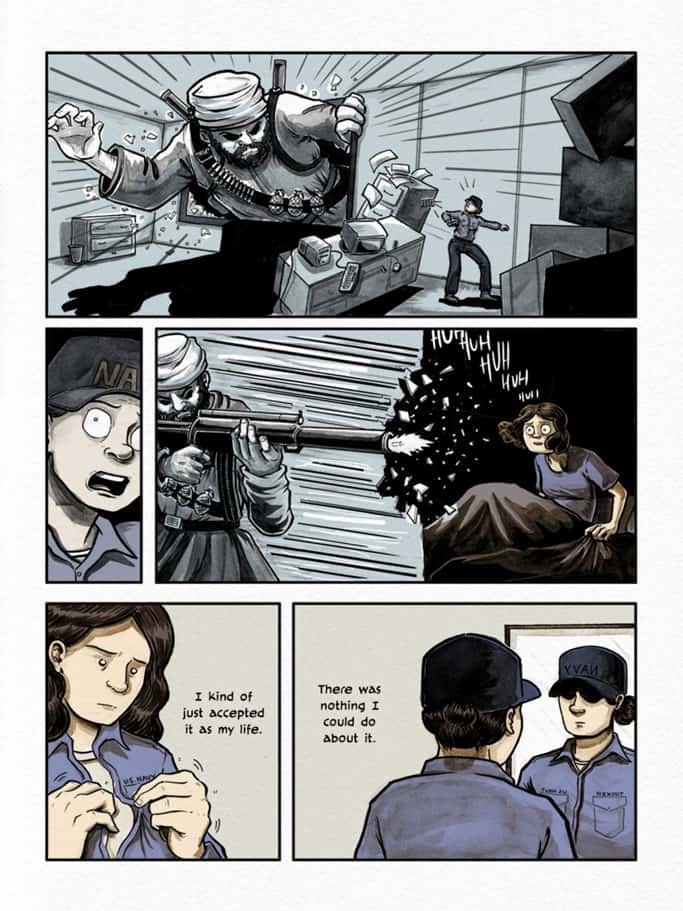 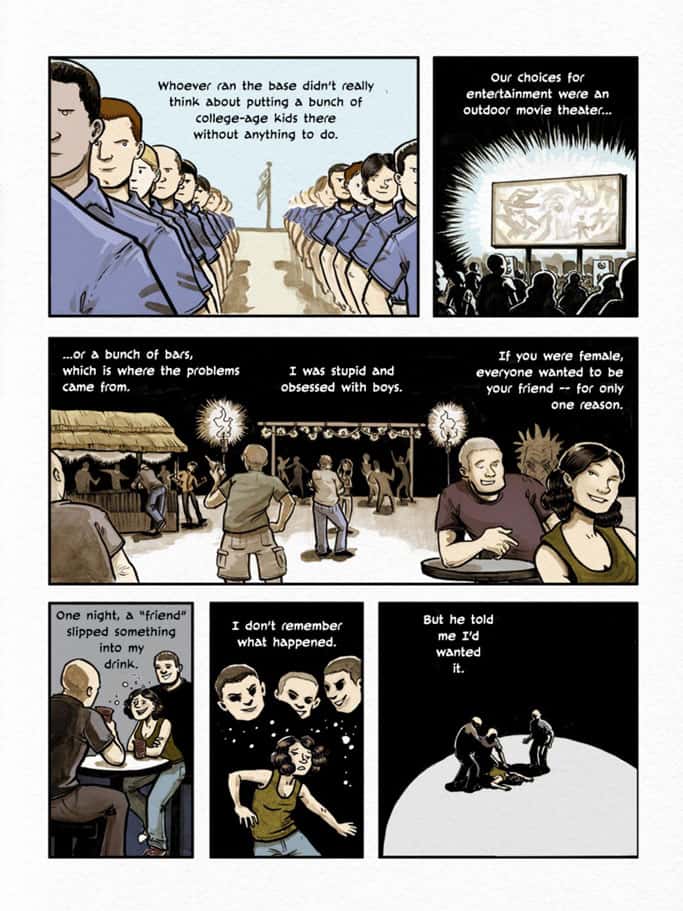 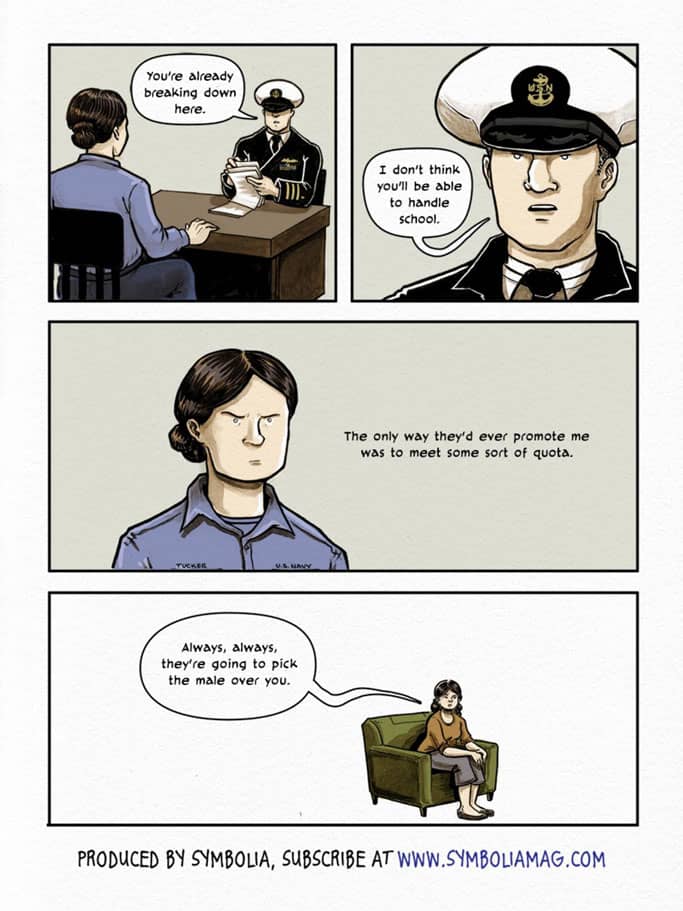 Sarah Mirk is a social justice-focused writer and editor based in Portland, Oregon.  Beginning her career as a reporter for alternative weekly newspapers The Stranger and The Portland Mercury, since 2013 she has been the online editor of national feminism and pop culture nonprofit Bitch Media. In that role, she edits and publishes critical work from dozens of writers, runs social media pages with a reach of 1.5 million readers, and hosts the engaging feminist podcast Popaganda, whose 10,000 listeners tune into episodes on topics ranging from environmental justice to reproductive rights. She is the author of Sex from Scratch: Making Your Own Relationship Rules (Microcosm, 2014) an open-minded guide to dating that is heading into its second edition. Sarah also writes, draws, and edits nonfiction comics, including the popular series Oregon History Comics, which tells little known and marginalized stories from Oregon’s past. She is a frequent political commentator on Oregon Public Broadcasting and has given lectures on feminism, media, and activism at colleges around the country, including Yale, Skidmore, Grinnell, University of California-San Diego, and University of Wisconsin-Madison. She is an adjunct professor in Portland State University’s MFA program in Art and Social Practice, teaching a graduate seminar on writing and research.

Lucy Bellwood is a cartoonist and illustrator based in Portland, Oregon. She spends most of her time drawing Baggywrinkles, an autobiographical series about life on replica tall ships, but can also be found teaching dance in Portland’s blues scene or knitting intricate shawls.

Thousands turned out in Berlin on Sunday to protest the German government’s anti-coronavirus measures despite a ban on the gatherings, leading to clashes with police and around 600 arrests. https://bit.ly/2V7mRQZ

A court in Belarus has convicted a journalist of insulting the president in messages in a deleted chat group and sentenced him to 1 1/2 years in prison. https://abcn.ws/3fm5sdW

You can purchase your very own copy of PEN America's third annual volume of DREAMING OUT LOUD: VOICES OF MIGRANT WRITERS, an anthology of writing from emerging #undocumented and #immigrant writers in New York City! Learn more: https://pen.org/dreaming-out-loud.