In advance of their PEN Out Loud discussion on September 4 at The Cooper Union, we asked authors Salman Rushdie (Quichotte, Random House) and Marlon James (Black Leopard, Red Wolf, Riverhead) talk about why they’re excited to be in conversation. Don’t miss out! Buy tickets here » 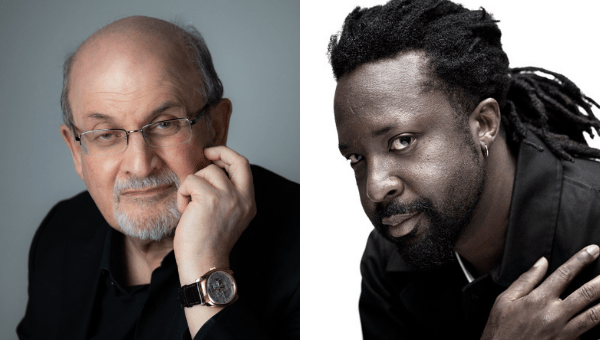 1. What do you want readers to know about your new book, Quichotte?
That it’s funny. That it’s a kind of panoramic road novel of America, but also a story about three kinds of love: romantic love, love between brothers and sisters, and between fathers and sons. Oh, and it has elements of spy fiction, absurdism, and science fiction too.

2. What was the last book you read? What are you reading next?
Last book: Sing, Unburied, Sing by Jesmyn Ward. Next book: Lost Children Archive by Valeria Luiselli.

3. Why do you think it is valuable for writers to be in conversation with each other about their work and current events through series like PEN Out Loud?
Writers don’t often get a chance to do this. Even if we know one another and meet socially, we usually don’t talk about our work. So, this is a way for us to do it, and hopefully readers enjoy the spectacle.

4. What do you admire about Marlon James’s work as a writer? What are you looking forward to speaking with Marlon about in September?
Marlon imagines on a grand scale and writes beautifully and likes to write “everything books” that encompass as much of life as possible, and, well, so do I. So we’ll talk about that. Everything. In one hour.

5. What does PEN America’s work defending freedom of expression mean to you?
It has always been important around the world, because writers are under attack in many countries. Now it has become vital here in America, because free expression is under attack here. And it’s the freedom upon which all other freedoms depend.

1. Following Black Leopard, Red Wolf, what are you working on next?
The sequel, which tells the story from a different character’s POV. It’s called Moon Witch, Spider King.

2. What was the last book you read? What are you reading next?
The last book was Restoration by Rose Tremain. Right now reading A Fistful Of Shells by Toby Green.

3. Why do you think it is valuable for writers to be in conversation with each other about their work and current events through series like PEN Out Loud?
Because I can imagine a writer as young as I was once (who hadn’t seen much and couldn’t afford much) being blown away by the gift of seeing writers in conversation.

4. What do you admire about Salman Rushdie’s work as a writer? What are you looking forward to speaking with Salman about in September?
Well Shame has the dubious distinction of making me throw away a novel I was almost done with, all 300 pages of it. There is the novel that opens your eyes to everything that fiction can be, the novel that gives you the permission you never thought you needed, to write the book you would never dare write. Shame was that novel.

5. What does PEN America’s work defending freedom of expression mean to you?
When the oppressors come, they go after the writers first. Because reading and writing are both acts of freedom, but they are private acts, and as such, quite dangerous to anyone who wants to take freedom away. Even in a so-called democracy. PEN America stands as a reminder that literature is essential in speaking truth to power, especially when it is a personal truth at odds with the powers that be.

Real and Reimagined: A PEN Out Loud Reading List