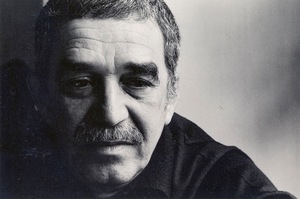 President Clinton mentioned that he met Gabo on Martha’s Vineyard; it was at a dinner party at our house when Gabriel García Márquez was visiting in the ’90s. That dinner party is etched in my memory for many reasons: the discussion during soup of the American embargo on Cuba; the recital during entrées by Bill Styron, Carlos Fuentes, President Clinton, and Gabriel García Márquez of their favorite books and childhood literary influences; the call from Belfast during dessert urging the President to get involved in the nascent Northern Ireland peace talks. But what I remember most is how aware I became of Gabo as a supreme, intense romantic. I don’t mean just his courtliness, his love of and attention to women (though I can’t deny the singular appeal of that). When I interviewed him in the late ’90s for Voice of America, he said that the only thing he could think of to save the terrible world we live in was to turn all power over to women. He said he thought love was the worst demon, the personal disaster without which he could not live. From his books, you know how remarkably well he observes and appreciates women of every age, the beautiful girls and the young women who grow old and are still loved, as Fermina is in Love in the Time of Cholera:

His love awakened in him an overwhelming desire to salvage the sunken treasure from the Spanish galleon that was found, so that Fermina Daza could bathe in showers of gold. Years later, when he tried to remember what the maiden idealized by the alchemy of poetry really was like, he could not distinguish her from the heartrending twilights of those times. Even when he observed her unseen, during those days of longing when he waited for a reply to his first letter, he saw her transfigured in the afternoon shimmer of two o’clock in a shower of blossoms from the almond trees where it was always April regardless of the season of the year.

In this interview I mentioned, he talked gloriously of his grandmother, the storyteller who inspired his later fiction. He said he never distinguished between his journalism and his fiction, except that when he called it journalism, both of his feet were on the ground and in fiction, he allowed himself to fly around the stratosphere. Romantic magic realism.

When I think back over the thirty years since we met, “romantic” is the word that always surfaces. We met in 1974: Both of us had been in Chile, immediately following Pinochet’s coup of September 11, 1973. Gabo was a journalist and I was a scout for Amnesty International with an extra-crazy mission for PEN: to bring back Pablo Neruda’s latest manuscript, said to be buried by his wife in concrete at a certain corner in Santiago. Mission failed. At that time, Gabo swore publicly that he would not write another word of fiction until Pinochet was ousted. Thank god he didn’t stick to that. A decade or so later, he protested President Reagan’s policy in Nicaragua. This assured that at least for the ’80s he’d be denied his dream of obtaining a U.S. visa so he could visit Faulkner’s home in Mississippi. Gabriel García Márquez was as much in the Southern literary tradition as Bill Styron was. Even in 1990, when the United States finally decided he was no longer too dangerous to let in, Gabriel was allowed to visit only New York. Mississippi had to wait.

I also remember him at the Cannes Film Festival in 1983. Bill and I suggested to the then-unknown and pretty unlikely looking Harvey Weinstein—he was in flowered Bermuda shorts and not much else—that if he wanted to start off the company he told us he was planning to form, he should take a look at the film Erendira, written by Gabriel García Márquez from one his short stories. It was being shown at the festival and we loved it. Gabo was skeptical but he gave it to Harvey and Miramax was born. Fifteen years later, Harvey saw me on the street in Vineyard Haven and said that he’d heard Gabriel García Márquez was coming to the island and that if I’d invite him over to meet his favorite author, he’d sweep floors and pass hors d’oeuvres. He’d do anything to make One Hundred Years into a film. Harvey has always had superb taste in books.

Gabo said no. He didn’t want movies made from his novels, but he was writing short stories and he’d show him one that he thought would be a good film when it was done. Harvey said, “Please do. I’d like anything.” A year later, at 6:45 P.M., in downtown New York after our Voice of America interview, Gabo said, “Let’s go see Harvey.” Miramax was around the corner and we felt sure Harvey would still be working and would rejoice in the new story Gabo would give him. It didn’t turn out exactly that way. The receptionist said in Hollywoodese that Mr. Weinstein was taking a meeting and that he certainly could not see a Mr. Gabriel García Márquez. I urged her to go upstairs and ask him anyway. She returned, huffily saying “Why didn’t you tell me he was Andy Garcia’s brother?” So up we went and there was Andy Garcia taking a meeting with Harvey, who sat behind his huge, high desk with Andy beside him, and Gabo and I were way down on the couch looking up at the great man.

But visiting the great man in Cartagena—the real great man, Gabo—made clear that he was the beloved superstar of his native Colombia. As he tour-guided us through the ancient city his novel made vivid, he was pursued by groupies of every description, and he always graciously stopped to chat and sign autographs.

In 2000, we met Gabo in Havana for a brief but spectacular trip with Arthur Miller and his wife Inga at Castro’s formal table. Gabo sat next to me doodling his signature flower, whispering in despair to imply we’d be here many more hours listening to his friend the dictator—a friend whose human-rights policies he despaired of. But loyalty goes with friendship, and loyalty to one he knew decades earlier, when he was a journalist covering the Warrior’s Revolution, was foremost on his mind. Suddenly at one A.M., Arthur Miller stood up and interrupted our host. “Mr. President,” he said. “When we arrived five hours ago, you pointed out that I was twelve years and ten days older than you. Well, now I am twelve years and eleven days older and I need to go to bed.” Castro stood to apologize, said goodnight, and all the Cuban ministers beamed. On the way to the car, everyone clapped Arthur on the back, his friend Gabo clapping hardest of all.

Our most recent visit was to his home in Mexico City, where in the quiet twilight he showed me around his fantastic library filled with almost as many books in English as in Spanish. He predicted that America would surely not be foolish enough to go to war with Iraq. What a romantic.