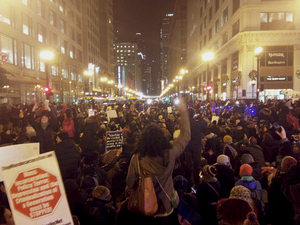 On Tuesday, July 5th, Alton Sterling was shot to death by police in the parking lot of a convenience store. The very next day, Philando Castile was killed by police while sitting in his car, pulled over for a traffic stop.

Nearly two years after the shooting of Michael Brown in Ferguson, Missouri, sparked the Black Lives Matter movement and widespread anger and protests over criminal justice, new instances of police killings of people of color that raise concerns about excessive use of force occur almost every week. According to The Guardian’s “The Counted” project, which tracks fatal shootings by police, Alton Sterling was the 558th person killed by police in 2016; Philando Castile was the 561st.

Since Ferguson, protesters, witnesses, and victims of police brutality have increasingly taken to their phones to monitor and record police behavior, posting their videos on social media to shed light on the official account of events. The footage captured by these citizen journalists often becomes part of a national debate about police use of force and racial bias, and contributes to calls for reform of police practices.

The images of Sterling, who was shot at point-blank range while pinned down on the ground, and Castile, slumped over bleeding in his car, were powerful, shocking visuals. However, in both of these cases as well as several other incidents, the individuals documenting the events later alleged that police had harassed them in retaliation. Chris LeDay, who was one of the first to widely distribute footage of the shooting of Alton Sterling, was arrested at his work less than 24 hours after he posted the video online and told he fit the description of a suspect wanted for assault, he reported on his Facebook page. Only upon being transported to jail, handcuffed and schakcled, did he find that his arrest warrant referenced only old traffic tickets. He was released after paying $1,231 in traffic fines and spending 26 hours behind bars.

Abdullah Muhlafi, the owner of the convenience store where Sterling was shot, has also reported police abuse. He alleges that after Officer Blane Salamoni shot Sterling, Salamoni immediately ordered two officers to confiscate the store’s security system and detain Muhlafi. Muhlafi’s lawyer confirmed that he has filed a lawsuit in which he claims that police stole surveillance video from his shop, confiscated his cell phone, and locked him in the back of a hot police car for four hours.

Lavish “Diamond” Reynolds, the fiancée of Philando Castile who recorded their encounter with the police, suffered a similar fate. Reynolds told the Los Angeles Times that after the traffic stop, her phone was confiscated and she was handcuffed and taken away for questioning. Reynolds told reporters that police confiscated her phone and that she was denied water and food during a long night in detention.

Claims of retaliation against witnesses and documenters of alleged police brutality have arisen in several other cases. The bystanders who filmed the arrests and deaths of Freddie Gray and Eric Garner have also described enduring police harassment, sometimes continuing for months after the incident. Kevin Moore, who documented the arrest of Freddie Gray, was detained eleven days after Gray’s death. In an interview, Moore claimed the police said that he was being held due to a traffic violation, making an illegal turn. Media reports indicate that Moore was released after about two hours, without any charges filed against him. He told Democracy Now! that he was still facing harassment by the police almost six months after the incident: “…Police sit outside my son’s school. And they ride past taunting me with their phones up.”

Taisha Allen, who filmed Eric Garner’s death by police in July 2014—a month before Ferguson unrest—was arrested the following February when she stopped to ask the police why they were questioning a friend of hers. According to a Brooklyn Federal Court lawsuit, she was allegedly identified as the person who filmed the Garner video and grabbed by several officers. Allen told the New York Daily News she was beaten and dragged by the officers, and received treatment at Staten Island University Hospital. She ended up pleading guilty to disorderly conduct and obstruction charges, but has since filed a lawsuit claiming excessive force and wrongful arrest.

Ramsey Orta, another citizen journalist who filmed Eric Garner’s last words, told Time that he also has been unfairly targeted by the police. Orta says in videos posted to YouTube that he was stopped twice for robberies in which he had no involvement and that police have harassed him and family members at home. In an interview with Democracy Now!, Orta’s aunt Lisa Mercado said “it was a constant harassment every day, on a daily basis, within the day hours, and it could be 3:00, 4:00, 5:00 in the morning. Policemen would ride by the home and put spotlights into the windows.”

Orta has since been arrested several times—the first just one day after Garner’s death was ruled a homicide—on multiple charges, including domestic assault, obstructing arrest while filming a traffic stop, and selling MDMA to an undercover cop. (The alleged MDMA has since been shown to be fake and the relevant charges reduced.) He is now slated to go to jail for four years after taking a plea deal on drug- and weapons-related charges.

Together, these allegations strongly suggest that some police officers are retaliating against those who document police brutality. As new technologies redefine the way the public uses digital media and engages in acts of journalism, it is important for police to understand and respect the rights of individuals who film and disseminate important information about abuses and violations of human rights. A number of U.S. appellate courts have explicitly recognized citizens’ First Amendment right to film police officers in the course of their duties in public spaces, a position also supported by the Department of Justice. The Department of Justice has stated that the First Amendment extends to prohibit government officials from “punish[ing] the dissemination of information relating to alleged governmental misconduct.”

Acts of journalism are not limited to official members of the press. Citizen journalism has formed the core of media coverage of police violence against people of color, and fueled public policy debate on the issue.  In the age of camera phones and social media, police must be trained on the rights of citizen journalists, and these rights must be guaranteed to all.