Defending Free Expression: A Toolkit For Writers and Readers 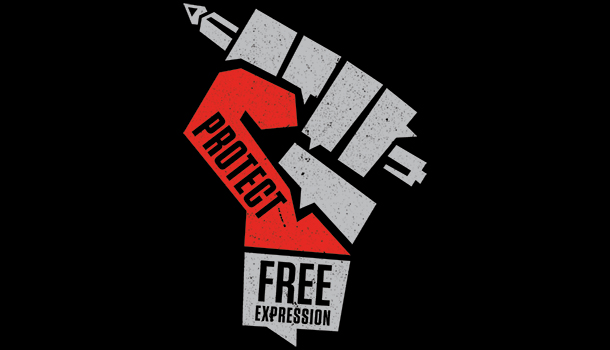 With an incoming U.S. presidential administration that has threatened to silence voices it cannot control—from demonization of the press, to divisive rhetoric against minorities, to threats to arrest or imprison political opponents—many in the PEN America community are looking for ways to respond. We have launched this Defending Free Expression: A Toolkit for Writers and Readers to help authors, journalists, artists, and others who exercise creative expression mount a defense of their craft and core freedoms.

We start by identifying the warning signs of a developing autocracy that is taking steps to curtail the rights of citizens. Then, we suggest specific actions writers and readers can take to protect our First Amendment rights. And finally, we share the advice of others with experience in countering anti-democratic forces hostile to free expression.

This toolkit is part of PEN America’s #LouderTogether campaign to stand as a bulwark defending free expression, free assembly, the diversity of voices, and the force of reason. It is a work in progress and we will update it regularly; we welcome your contributions at LouderTogether@pen.org.

What are the telltale signs of an emerging autocracy? Be on the lookout for a leader who:

The ability to speak truth to power is a primary underpinning of a healthy democracy. It is also a core obligation for writers, journalists, and others who are committed to protecting free expression. Here’s what you can do:

1. Ask your Representatives to protect your First Amendment rights and protections in all government policies and appointees.
Former Congressional staff members have put together Indivisible: A practical guide for resisting the Trump agenda, a comprehensive handbook for making members of Congress listen. Other sets of tips have been put together by former Congressman Steve Israel and a former congressional staffer.

2. Support hard-hitting, investigative, and long-form journalism (and read it, too!).
Trump surrogates such as Sean Hannity and Mike Huckabee have argued that “journalism is dead” in the United States. While this is certainly not true, the demonization of the media in 2016 and the rise of a “post-truth politics” mean that probing journalists and day-to-day reporting are under increasing threat. Subscribe or donate to the news outlets that you believe are doing important reporting. Include your local newspaper—support its vital coverage of your community.

3. Educate yourself about your First Amendment rights and protections.
It is difficult to defend one’s rights without knowing what they are. There is no better way to understanding the First Amendment than to read it yourself. Education doesn’t stop there. Find an online course on free expression, such as Columbia University’s Freedom of Expression in the Age of Globalization, or UCLA/Berkeley’s Freedom of Speech and the Press.

4. Launch a petition.
The Constitution guarantees your right to petition your government. Exercise it. Petition sites such as Change.org, We the People, AVAAZ, and Care2 allow you to launch a petition for free. You can also add your name to the pledge to protect the First Amendment led by PEN America with other progressive organizations and signed by many thousands of supporters, including all the U.S. Poet Laureates.

5. Mount or join a resistance event.
Writers Resist is a nationwide movement that seeks to tap creative energies to temper growing public cynicism and a cavalier attitude towards truth. On January 15, 2017, Writers Resist events will be held across the country, with the flagship event—sponsored by PEN America—occurring in New York City. Join us on the steps of the New York Public Library or click here to find a Writers Resist event in your city.

6. Protect yourself against government surveillance or hacking.
Online privacy is an evolving challenge, and the debate about government monitoring vs. privacy rights remains unsettled – and vulnerable to calls for sacrificing a degree of privacy for greater national security. Know how to protect your data and your privacy rights:

Secure messaging:
Review Amnesty International’s rankings of the 11 most popular messaging apps and how secure each is from third-party hacking or surveillance.

Private internet browsing:
Tor Browser is an internet router for private browsing, keeping your location and the sites you visit private from anyone attempting to view your search history or collect your data.

The Electronic Frontier Foundation has developed a Surveillance Self-Defense Kit, with further tips on how to guard your privacy.

7. Exercise your right to free speech by using the power of words to counter disinformation, hate speech, and moves against the First Amendment.
Letters to the editors and opinion pieces have long been a tool for citizen activists. Newspapers and online media outlets serving your community will have information on how to submit. There are many other creative ways to commit to sounding the alarm against hate speech and disinformation, from skits to leafleting to skywriting. Google “creative ways to protest’’ to get ideas. You can also learn more about how to speak out against bigotry and counter hate speech online, and particularly on Twitter.

8. Learn how to identify “fake news” and disinformation, and help others to do so, too.
Read up on best practices in news literacy, including ways to spot false stories and how help to stop spreading this disinformation further. Use and support fact checking initiatives.

9. Connect with others.
There is strengthen in numbers, and much to be done. Find a community group that works on a cause you care about and volunteer. Learn how to be an active witness if you see a hate crime, and come to the aid of victims of bigotry in public places.

10. Seek out and share works that consider the growth of authoritarian regimes and how to defend free expression and press freedoms.
Whether you set out on a personal exploration or form a book club to widen the discussion, there are many titles to choose among. PEN America staff point to books such as Bad News: Last Journalists in a Dictatorship (on our 2017 Literary Awards longlist) or the more classic There’s No Such Thing as Free Speech (winner of the 1994 PEN Literary Award for the Art of the Essay).

Alas, there is experience to be shared by those who have fought for freedom expression under autocratic regimes and observed how they function. Here are places to start reading:

How Can Journalists Protect Themselves During a Trump Administration?
Kaveh Waddell

10 Ways to Tell if Your President Is a Dictator
Stephen M. Walt

What You—Yes, You—Can Do to Save America from Tyranny
Timothy Snyder

I Watched a Populist Leader Rise in My Country. That’s Why I’m Genuinely Worried for America
Miklos Haraszti