Reports of Press Mistreatment During Baltimore Protests and Riots 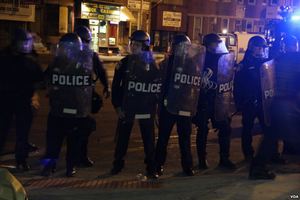 Reports of the mistreatment of members of the media by police during the ongoing protests and riots in Baltimore following the death in police custody of Freddie Gray are concerning, PEN American Center said today.

Various members of the press have reported being detained, physically assaulted, and shot at with rubber bullets and pepper balls by the Baltimore police. Late on Saturday, April 25, J.M. Giordano, photo editor at City Paper, was forced to the ground and hit and kicked by several officers. Video footage of the incident can be found here. Sait Serkan Gurbuz, who was shooting pictures for Reuters, was detained at around the same time as Giordano, while he was photographing an interaction between police and a photojournalist. Gurbuz was issued a citation for “failure to obey orders”. Freelance reporter Shawn Carrie was arrested on Monday, April 27, and reportedly held for 49 hours before being released without charges. He also sustained a concussion from a rubber bullet, and says police singled him out for arrest while he was taking photos.

The Baltimore Police Department (BPD) later apologized for detaining Gurbuz and reportedly recalled the citation. The BPD also says police have been instructed to give media access to all interactions between police and protestors.

PEN is very concerned by the treatment of Giordano, Gurbuz, and Carrie. The media’s right to document public demonstrations is protected under the First Amendment and international human rights law. PEN also welcomes the BPD’s efforts to respect press freedoms in the midst of a challenging situation.

PEN American Center published an extensive report on violations of press freedom during the protests in Ferguson, Missouri, including an overview of press freedoms under U.S. and international law. The report is available here.