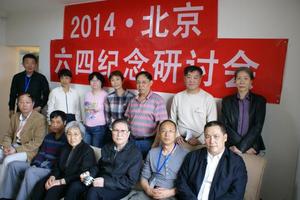 The following was released by PEN International.

Five prominent dissident writers arrested for taking part in events to commemorate the 25th anniversary of the crackdown on the 1989 pro-democracy protests should be released immediately and unconditionally, PEN International said today.

Two of those detained are members of the Independent Chinese PEN Center (ICPC), an affliate center of the global organization of writers. A third member of ICPC is also feared detained separately.

On May 3, 2014, at least 15 people—writers, scholars, and activists—gathered at a private residence in Beijing to commemorate the upcoming 25th anniversary of the brutal crackdown on the June 4, 1989 pro-democracy protests. An estimated 2,000 unarmed individuals were killed by Chinese troops in Tiananmen Square, Beijing, and other Chinese cities.

In a statement released after the meeting, participants, who included relatives of those killed during the protests, called on the Chinese government to launch an official investigation into the events in 1989 and to compensate the victims. They also released a photograph of themselves standing behind a banner saying, “2014 Beijing June 4 Anniversary Seminar.”

“In China, it is a crime to remember what happened in Tiananmen Square in 1989,” said Marian Botsford Fraser, Chair of PEN International’s Writers in Prison Committee. “After a quarter century, the time has come for the Chinese authorities to confront and acknowledge and comprehend their history, not ritually harass and annually punish their citizens.”

On May 4 and 5, 2014, some of the participants at the May 3 memorial were taken in for questioning by police. Most were released after interrogation, but at least five have been criminally detained on suspicion of “causing a disturbance.” Those detained include writer and human rights lawyer Pu Zhiqiang; writer and activist Hu Shigen; writer and academic Hao Jian, a professor at the Beijing Film Academy; Professor Xu Youyu, a researcher at the Chinese Academy of Social Sciences; and dissident blogger Liu Di.

Under Chinese law, police can hold people for up to 30 days under criminal detention before deciding whether to pass the case on to prosecutors. It has been confirmed that all five are being held at Beijing No.1 Detention Center.

PEN is calling on the Chinese authorities to ensure the safety and integrity of all five, and calls for their immediate and unconditional release.

Also thought to be detained in conditions that may amount to enforced disappearance is Beijing-based veteran journalist Gao Yu, who has been missing since April 23, 2014. The 70-year-old Gao last made contact with Deutsche Welle, a German newspaper for which she is a special contributor, on April 23, and was writing a column due on April 26 entitled “Party Nature vs. Human Nature,” which is said to focus on the new leadership of the Chinese Communist Party and its internal conflicts.

The article was never submitted, and when Gao did not attend a June 4th memorial event in Beijing on April 26, as scheduled, friends reported her disappearance. Gao had also been due to travel to Hong Kong to speak at the annual awards ceremony of the Independent Chinese PEN Center (ICPC), of which she is a member, on May 3.

PEN is calling on the Chinese authorities to reveal as a matter of urgency whether or not they are holding Gao Yu and if so, to allow her immediate and regular access to her family and a lawyer of her choice. If she is being held solely on account of the peaceful exercise of her right to freedom of expression, she should also be released immediately and unconditionally.

Gao Yu was formerly the chief editor of Economics Weekly before being barred from publishing. She was imprisoned for over a year for supporting pro-democracy protests in Tiananmen Square in 1989, and spent a further five and a half years in prison from 1993 to 1999 for “providing state secrets to parties outside [China’s] borders” in a series of political and economic articles in Hong Kong-based publications.

She has continued to work in China as a freelance journalist in spite of considerable restrictions and pressure. Gao Yu contributed an essay to PEN’s 2013 report “Creativity and Constraint in Today’s China.” She is an honorary director of ICPC and an honorary member of Czech PEN.

University lecturer, political activist and dissident writer Hu Shigen previously spent over 16 years in prison from 1992 to 2008 on charges of “leading a counterrevolutionary organization” and “counterrevolutionary propaganda” for his pro-democracy activities and writings. He is a member of ICPC and an honorary member of PEN Canada and English PEN.

Beijing-based freelance writer and translator Liu Di, known by her former online nickname “Stainless Steel Mouse,” spent over a year in jail without trial in 2002 on subversion charges for blogging about China’s internet restrictions as a university student. Since then, she has continued to write online about Chinese society, and also contributed an essay to PEN’s 2013 report “Creativity and Constraint in Today’s China.” She is an ICPC board member and director of its Youth Committee.

The International Convention for the Protection of All Persons from Enforced Disappearance defines enforced disappearance as “the arrest, detention, abduction or any other form of deprivation of liberty by agents of the State or by persons or groups of persons acting with the authorization, support or acquiescence of the State, followed by a refusal to acknowledge the deprivation of liberty or by concealment of the fate or whereabouts of the disappeared person.”