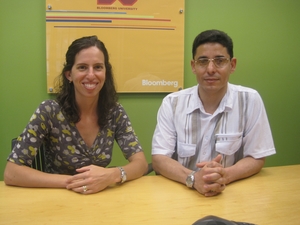 I welcomed 2003 in Havana, throwing buckets of water off the balcony along with all the Cubans around me. My greatest worry was whether we would have enough for cooking and bathing the next day. Sure enough, the next morning I awoke to the announcement, “No hay agua.” But 2003 would not just be another year of the same chronic shortages that had plagued the island for over a decade; something more sinister was in store.

Back in New York, I thought about Huber Matos, Heberto Padilla and Arnaldo Ochoa—all men who had publicly suffered for standing up to the Revolution but seemed to belong to a Cuba of the past. In January 2003, there was only one Cuban writer in prison. That would change just two months later when, as the world’s eyes were turned on the American invasion of Iraq, Cuban authorities rounded up 75 writers, journalists, and activists across the island.

I was the Freedom to Write Program Coordinator at PEN American Center at the time. I quickly went from reading about the crackdown in the international press to writing press releases and making inquiries. The show trials led to sentences of 13 to 27 years, almost without distinction. Their sole means to “conspire to overthrow the Cuban government” were their pens.

Many had pre-existing health problems. I was also achingly aware of how young some of the condemned men were and feared that a prison sentence could equal a death sentence for them as well. They were all taken to prisons across the island, often far from their families and from adequate medical facilities, in order to serve their sentences.

The most pressing goal for PEN at the time was to win the release of all those arrested and sentenced in the Black Spring of 2003 and, furthermore, to achieve the repeal of draconian laws like Article 91 of the Cuban Criminal Code, which dealt heavy sentences to anyone “who, in the interest of a foreign state, commits an act with the objective of damaging the independence or territorial integrity of the Cuban state.” We staged campaigns to raise public awareness and used every opportunity available to denounce the continued imprisonment of men whose only crime was to exercise their universally guaranteed freedom of expression.

Over the course of the next few years, I established telephone relationships with the wives and mothers of the imprisoned men, relaying vital information about health concerns and prison conditions to PEN members and other international organizations. We attempted to alleviate their burdens by sending basics such as medicines and toiletries to the men in prison and to the families as they endured the separation. Groups such as the Damas de Blanco formed on the island during this dark period, but their courageous outspokenness did not change the fact that to have a husband or son in prison was a great financial and emotional hardship for any Cuban family. Some relationships did not survive the pressures of constant harassment by neighbors and government authorities and the difficulties of traveling by bus literally across an entire island for a 20-minute prison visit.

The descriptions of the rancid food served to the men in prison and of the continuing nightmares some of the children of these same men had about their own fathers rarely left me when I was not at the PEN office. Thus, moments like meeting Raúl Rivero in New York shortly after his release from prison in November 2004 were all the more sweet. I hugged him, heard him read some of his poetry and practically floated home afterward, secure in the knowledge that prison could not silence any of the voices of the 75 imprisoned during the Black Spring.

I felt similarly when I had the opportunity to meet Manuel Vázquez Portal in Miami in the spring of 2007, as PEN prepared to give that year’s PEN/Barbara Goldsmith Freedom to Write Award to Normando Hernández. Manuel and I drove to Hialeah together to the house of Normando Hernández’s mother, who I was going to interview for a short video we planned to show during the award ceremony. But before the interview, Manuel and I talked about simple things like the Cuban musicians we both enjoyed listening to and Manuel’s work at a Miami news agency. Manuel’s jovial tone, too, gave me hope, when I needed it most to focus my energies on Normando’s case.

Normando himself was eventually released as well, as part of a deal brokered by the Catholic Church and Spanish authorities in the summer of 2010. As a condition of his release, he had to go from the prison to the airport and board a flight to Madrid with his family. The first time I heard his voice was when we spoke on the phone shortly after his arrival in Madrid. He treasured his freedom, but was outraged by the forced exile that accompanied it. I, too, was outraged. There was never any acknowledgment by the Cuban government that the men had been unjustly imprisoned to begin with or that every Cuban has the right to exercise his or her freedom of expression.

For me, the events of the last 10 years since la Primavera Negra indicate not just how little progress has been made in the arena of free expression on the island, but also how much those arrested and imprisoned lost.  For all the press that PEN provided, the medications, the sound of a reassuring voice on the other end of an international telephone line, those imprisoned will never get back their health, time with their families, the ability to see their children grow before their eyes, and, in nearly every case, their country. That the vast majority of those imprisoned had to sign on to leaving Cuba in order to leave prison is just one more injustice of la Primavera Negra.